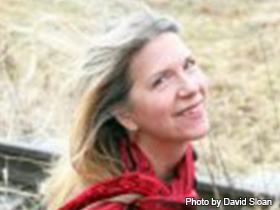 An instructor at DeSales University, Ann E. Michael has written More than Shelter and is an artist-in-the-schools participant.

Born in Fort Wayne, Indiana in 1958, poet Ann E. Michael received her Masters of Fine Arts from Goddard College in 2003. Her poetry and essays have been featured in many journals and anthologies including Common Wealth: Contemporary Poets on Pennsylvania and she has published several chapbooks of poetry including More Than Shelter (2004), Small Things Rise and Go (2006), and The Minor Fauna (2006). At the time of this writing, she teaches at DeSales University and is a rostered artist-in-education through the Pennsylvania Council of the Arts.

Ann E. Michael was born in 1958 in Fort Wayne Indiana. She attended high school for three years before attending The New School for Social Research in New York City. She then transferred to Thomas Jefferson College, an alternative liberal arts college in Michigan (subsumed into the Grand Valley State University in 1981), where she received her degree in Arts and Literature in 1979. Michael notes that she started sharing her poetry with others in college, and was first published in 1981 in university magazines and a small publication called TIOTUS.

After college she continued her career as a poet while working in other literary fields. She became a member of the Philadelphia poetry scene in the 1980s and in 1998 she received a Pennsylvania Council on the Arts Fellowship in Poetry.

Some years later she returned to academia and earned her Master of Fine Arts degree in creative writing from Goddard College in Vermont in the summer of 2003. Since that time, she has published poems, articles, and essays in many journals and anthologies including The Writer's Chronicle, Schuylkill Valley Journal of the Arts, and Common Wealth:Contemporary Poets on Pennsylvania. She has also written chapbooks of poetry More Than Shelter published in 2004, Small Things Rise and Go, and The Minor Fauna both published in 2006.

Much of her poetry revolves around nature and relationships, both nature/human relationships as well as human/human ones. Her poems also often place strong emphasis on setting. For example, her poem "Sprawl" published in Common Wealth deals with the loss of nature to suburban housing plans. The last stanza of the poem illustrates some of these values. The speaker discusses not only their feelings toward nature, but in doing so shows their relationship to it.

I want my house to feel settled
in the midst of toads, muskrats, kestrels,
to feel the shelter of corn
and woodlots, to be sought
by the soft brown whispering bats-
to accept the transient nature
of earth's wild things,
belonging, as it must, among them.

In addition to her poetry and creative nonfiction, Michael currently works as a librettist and teaches courses in English and Writing at DeSales University and is a rostered artist-in-education through the Pennsylvania Council of the Arts, a program that places talented professional artists in school and community settings in order to promote the importance of arts education.

Currently, Michael lives in the Center Valley area of Lehigh County with her husband and two children. She continues to work on her poetry. When she is not working, she can often be found reading or working in her garden, which she says feeds the creative soul.