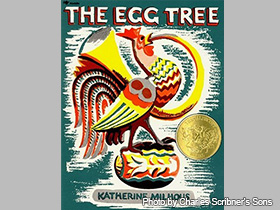 Milhous infused her love of her home state, Pennsylvania, into all of her works. In 1951, her book The Egg Tree(1950) won the Caldecott Medal.

Children's author and artist Katherine Milhous was born in Philadelphia, Pennsylvania, in 1894. She would demonstrate a lifelong devotion to the Commonwealth, setting all her books in Pennsylvania. Her talents were recognized by the Works Progress Administration and by the American Library Association, which awarded her the Caldecott Medal for The Egg Tree (1950). Milhous passed away in 1977.

When Milhous was a child, her family moved to New Jersey. In the camp-meeting town, where she grew up and attended her early schooling, Milhous was disheartened by the lack of culture in the area compared to Philadelphia. She never saw art that caught her eye or heard fine music. Milhous decided to return to the city to attend art school at the Pennsylvania Academy of Fine Arts and the Pennsylvania Museum of Industrial Art. During this time, she made up for the lack of art in her childhood days in New Jersey. Milhous worked hard to spend time creating and taking in works of art. She worked for scholarships to attend various other art programs. The Cresson traveling school granted Milhous the opportunity to study abroad. In order to save money for her artistic adventures abroad, Milhous did newspaper drawings at night. Despite her journeys abroad, Milhous's heart remained in Philadelphia. She remained there after finishing her schooling, and worked there for the remainder of her career.

Milhous's first illustrations appeared in books authored by Alice Dalgliesh. In 1940, her first book, Lovina, appeared. Milhous continued to publish her own children's books with Herodia, the Lovely Puppet in 1951. Her love of Pennsylvania and its cultural heritage, coupled with her own Dutch background, played an important part in developing the books. In her most famous book, The Egg Tree (1950), Milhous paints a picture of a Pennsylvania Dutch family and their magnificent Easter celebration. This book is one of the author's most loving portrayals of her home state. Milhous continued to design books for others and herself throughout World War II. In 1955, she paid homage to her birthplace in her book Through These Arches, which was the culmination of many years of work for Milhous. She wanted to devote a book to her life long love for Philadelphia and its important historical background. The idea for the book came to Milhous during one of her frequent "long walks about the early city."

In 1951, Milhous was awarded the Caldecott Medal for a picture book for The Egg Tree. Her use of bright tempera paints brought to life the bold borders and vibrant pages of the book. Milhous also used the traditional Pennsylvania Dutch hex designs in the colorful children's book. During her earlier days as an artist, Milhous also served as the head of a Federal Art Project for the Works Progress Administration.