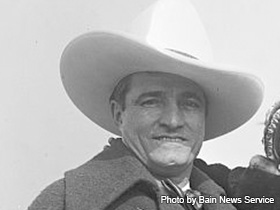 Born in 1880, Mix was the son of Ed and Elizabeth Mix. He spent his childhood in Dubois, Pennsylvania, and later enlisted in the Army. Mix is best known for his roping and horseback riding skills and was one of the most successful motion picture cowboys of all time. His career lasted for 25 years, 1910-1935, and he starred in between 300-400 films. Mix was killed in a car accident in 1940 in Florence, Arizona.

Tom Mix, the western film star, was born January 6, 1880, in Mix Run, Pennsylvania. He was the son of Ed and Elizabeth Mix. When Mix was four-years-old, the family moved to Driftwood, Pennsylvania; however, they only remained there for four years before his father, Ed Mix, took a position as stablemaster and chauffer for lumber baron John E. DuBois. The family then picked up and moved again to nearby DuBois. It was in DuBois that Mix first became interested in his father's work, especially the handling of horses. The locals would frequently comment that "Tom learned to ride anything that could walk." His interests and skills with horses helped shape his identity later in life as a country western film star.

At the age of eighteen, Mix decided that life in DuBois was not for him and enlisted in the Army. Although he never saw combat, he was honorably discharged after three years, but immediately re-enlisted. He was reassigned to Fort Hancock, New Jersey where he met and married his first wife Grace I. Allin. His marriage to the school teacher only last a year before it was annulled. She is often said to be the reason he never returned to the Army in October 1902. He was listed as absent without leave and later as a deserter. Soon after Mix left the East coast, he moved out west where he held a number of jobs such as bartender, ranch hand, law enforcement officer, and a drum major for the Oklahoma Calvary Band. Mix was remarried twice after that to Jewell "Kitty" Perrine and later to Olive Stokes.

Mix's marriage to Olive Stokes eventually led him into the movie business. The two worked on the road for several Wild West shows. In early 1910, the Chicago-based Selig Polyscope Company signed a deal with Will A. Dickey and his Circle D Ranch Wild West Show. Dickey happened to be an old friend of Olive's family and was interested in Mix after seeing him perform. Mix was initially hired to locate stock and wranglers for Selig's western films. However, not long after he was hired, he was given a small part in the film The Range Riders (1909), and he later starred in the semi documentary Ranch Life in the Great Southwest (1910). These two films helped shaped Mix's identity as a natural cowboy. William Selig, a pioneer in the motion picture business, was so impressed with Mix's on-screen performances that he sent him to Florida to act in a series of jungle movies. Mix was given supporting roles, along with female star Kathlyn Williams, in two films, including Back to the Primitive (1911) and Hearts of the Jungle (1915).

After his success in Florida, Mix's next move was to Arizona in 1913. It was there that he proved himself worthy as an actor to Selig, and was offered his very own series. The first film in the Tom Mix series was the single-reeler The Real Thing in Cowboys (1914). However, after a short amount of time, there were conflicts over production costs between Mix and Selig, and Mix decided to sign with William F. Fox in 1917. This change also brought about changes in Mix's personal life. He divorced Olive Stokes and married a Fox costar Victoria Forde. They later had one daughter in 1922. Mix's days with Fox attracted people, both young and old, to flock to theaters to see his action packed western films. Throughout the 1920s Mix and his horse, Tony, traveled around the country and performed in front of numerous packed audiences.

However, during the 1920s the "talkies" came out and Mix's future as a silent movie star seemed uncertain. Mix decided to take the next two years off traveling and writing; however, his literary career was short-lived. He mainly wrote commentaries, reviews, and humorous observations for popular magazines such as Photoplay. The thought was that Mix could be another Will Rogers and have his own newspaper column. Robert Birchard compares the two figures in King Cowboy: "Where Will Rogers had the ability to make readers look at the world through new eyes Tom Mix was just another guy with an opinion." While taking time away from the big screen, Mix also traveled with the Sells-Floto circus as one of the main attractions. He performed both his roping skills and horse-back riding stunts. It was in the circus that he met an aerial performer, Mabel Hubbell War, and married her in 1932 after divorcing his fourth wife. They had one daughter. That was also the year he decided to return to the movies and stared in two films; Destry Rides Again, Rider of Death Valley, and My Pal, the King. Although they were somewhat successful films, their popularity levels were nothing near those of Mix's silent films. Mix retired from the film industry in 1932, only to come back for one last performance in The Miracle Rider (1935) at the age of 55. This time, his jet black hair came from a bottle of dye, and most of his daring stunts were executed by a stunt double. Following his retirement from the film industry, he formed his own touring circus, Tom Mix Circus. Mix loved performing in front of live audiences and the show was a great success.

Although Tom had escaped and cheated death so many times in his on screen performances, his luck ran out in October 12, 1940. Mix was driving in Florence, Arizona and came upon a construction site. As he swerved to avoid a collision, Mix lost control of his car and the car was overturned. Mix was struck in the back of the head by a metal suitcase that was in the back seat. The impact of the suitcase snapped his neck and he was killed instantly. In Mix's own words to Relman Morin (as recorded by Robert Birchard in King Cowboy) in 1932, "Death isn't an accident. It's figured out in advance, and calculated for the good of everybody concerned."

Mix was laid to rest atop a hill in the Whispering Pines section of the cemetery in Glendale, California, on October 16, 1940. His saddles, guns, costumes, etc. were left to his attorney and later purchased by the citizens of Dewey, Oklahoma. They used the memorabilia to open the Tom Mix Museum in 1968. Robert Seiverling records that there is also a marker on the spot where Mix was killed that reads: "In memory of Tom Mix whose spirit left his body on this spot and whose characterization and portrayals in life served to better fix memories of the Old West in the minds of living men."