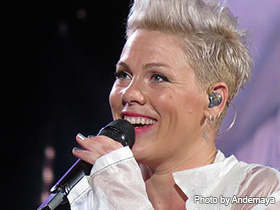 Alecia Moore was born on September 8, 1979 in Doylestown, Pennsylvania. After signing with LaFace Records, she received a great deal of commercial success with her subsequent albums. Alecia "P!nk" Moore has also won two Grammys in her short career. After a few successful years, she has also married her longtime boyfriend Carey Hart.

Alecia Moore was born on September 8, 1979, in Doylestown, Pennsylvania, to James Moore and Judy Kugel. Alecia identifies herself as Jewish (from her mother's side). She was constantly dealing with asthma throughout her childhood. Her parents divorced when Alecia was a child, which led to a lot of rebellion and fighting with both her parents. As a teenager, she attended Central Bucks West High School. At an early age Moore began singing in Philadelphia clubs until she joined the group Choice, an R & B group based in Atlanta. Choice was signed by the L.A. Reid and Babyface owned record company LaFace Records. Upon given the choice to stay at LaFace as a solo artist or leave with the band, Alecia made the difficult decision to leave the band and stay with the record company. It was at this time that she first took on the stage name "P!nk." She names a few of her influences as Mary J. Blige, Billy Joel, and Janis Joplin.

Pink's first album, Can't Take Me Home, was released in 2000. The album was extremely successful going double platinum and producing a number of popular singles. Her image at the time included bright pink hair, which Pink later said she regretted agreeing to. She said she gave up a lot of creative rights for this album and did not like much of the music. During this time, she also collaborated with Christina Aguilera, Mya, and Lil Kim for a remake of the classic song "Lady Marmalade." "Lady Marmalade" propelled Pink even further into the spotlight because it won a Grammy for "Best Pop Collaboration" in 2002.

Pink's follow up album was titled, M!ssundaztood, because she thought people had the wrong idea about her. This showcased more of Pink's style. For this album, she brought in former Four Non Blondes lead singer Linda Perry to co-produce. This album took Pink in an entirely new direction. Originally, the people at LaFace Records were not pleased with the course the album was taking. This album produced a number of singles, including "Get the Party Started," "Don't Let Me Get Me," and "Just Like a Pill." Another song from the album, "Family Portrait," was a deeply personal track for Pink that described her parents' divorce. She toured several times for this album. First, touring in the United States with 'N Sync. Then she headlined a European tour. Finally, she opened for Lenny Kravitz back in the States.

Her third album, Try This, released in 2003, was not as well-received in the United States as her previous two albums. Try This included the songs "Trouble" and "God is a DJ." This album faired better in Europe and Australia, where she toured. It was with the song "Trouble" that Pink received her second Grammy award for "Best Female Rock Performance."

Following her third album, Pink took a break for a while to regroup and write songs for her fourth album. The album, titled I'm Not Dead, was released in 2006 and slow to gain success, but eventually became a very successful album. This album included the singles "Stupid Girls," "U + Ur Hand," and "Who Knew." A particularly interesting song in the album is "Dear Mr. President." This song is a letter to President Bush. She filmed a DVD while touring with this album at Britain's famed Wembley Stadium. Rolling Stone columnist Barry Walters wrote of her performance on I'm Not Dead that "Pink is ambitious the way Madonna used to be: a mess of contradictions and complications with a knack for making those inner conflicts bolster her art." After touring as a headliner, she also opened for Justin Timberlake in his U.S. tour.

In January 2006, Pink married her long time boyfriend Carey Hart, a motocross racer, in Costa Rica. They had an interesting relationship in that Hart proposed to Pink a few times, but they did not actually become engaged until Pink proposed to him while he was competing as a motocross event. In her personal life, Pink is a strict vegan involved with PETA (People for the Ethical Treatment of Animals). To this day, Pink continues to provide her many fans with new and popular music.