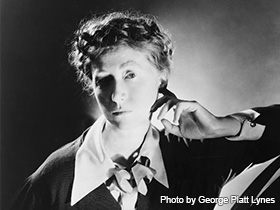 Marianne Moore, one of the giants of the Modernist poetry movement, was raised and began her career in Carlisle.

After moving to New York, New York, Marianne Moore began to delve into the literary world and produce collections of poetry, essays, and a play. She was influenced by the writing circle in New York City, including such writers as William Carlos Williams, Ezra Pound, H.D. and Wallace Stevens. She received many honorary degrees and awards for her outstanding work in poetry.

Marianne Craig Moore was born on November 15, 1887, to John Milton Moore and Mary Warner. She lived in Missouri with her grandfather, a Presbyterian minister, until his death in 1894. The Moore family moved to Carlisle, Pennsylvania, in 1896. In 1909, Moore graduated from Bryn Mawr College with a degree in biology. She studied typing at Carlisle Commercial College and graduated in 1910. From 1911 to 1915, she worked as a teacher at the Carlisle Indian School. Her poetry was first published in 1915 in the Egoist and in Poetry magazine. Moore and her mother moved to New York City in 1918, where later, in 1921, she began work as an assistant at the New York Public Library.

Moore lived in New York City for the rest of her life, devoting herself to the craft of poetry and literary criticism. While living there she became well-known in literary circles, meeting poets such as William Carlos Williams, Ezra Pound, H.D. and Wallace Stevens, and contributed to the influential literary journal, Dial. Moore was the acting editor of Dial from 1925 until its discontinuation in 1929. When her editorship came to a close, Moore supported herself entirely with her poetry and reviews. Respected as a skilled poet and intellect, Moore sought to present insights to the reader based on objectivity and detail.

Over the 60 years that Moore worked as a writer, she won acclaim, awards, and honorary degrees. She is one of the very few poets to have received the "triple crown" of poetry, winning the National Book Award, the Pulitzer Prize, and the Bollingen Prize. Her multitude of awards include the Dial Award, the Helen Haire Levinson Prize, the Ernest Hartsock Memorial Prize, the Harriet Monroe Poetry Award, the National Institute of Arts and Letters Gold Medal, the M. Carey Thomas Award, the Poetry Society of America Gold Medal Award, the Brandeis Award for Poetry, and the MacDowell Medal. Some of her fellowships include the Academy of American Poets Fellowship and the Guggenheim Fellowship. She received honorary degrees from Wilson College, Mount Holyoke College, Long Island University, New York University, St. John's University, Princeton University, Rutgers University, Smith College, and the Pratt Institute.

Moore dedicated her life to her passions of writing, animals, and baseball. On February 5, 1972, Moore died in New York City.