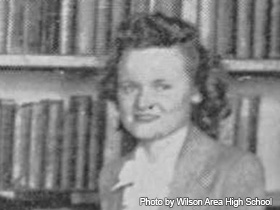 Moore is a writer of children's mystery books. Her book Danger in the Pines (1983) was named to the C.S. Lewis Honor Book List in 1983.

Children's literature author Ruth Nulton Moore was born in Easton in 1923. After a career in education, Moore began writing for children in 1965 and published prolifically until Parkinson's disease ended her writing. Moore passed away in Bethlehem in 2001.

Ruth Nulton Moore was born in Easton, Pennsylvania, on June 19, 1923. Her parents were Jacob Wesley Nulton, a dentist, and Stella Houck Nulton. In 1946, she married Carl L. Moore, a professor of accounting and a writer, with whom she had two children: Carl Nulton and Stephen Eric.

Moore worked as a public school teacher of English and social studies in Easton, Pennsylvania, from 1946 to 1950 and as a high school English and social studies teacher in Detroit, Michigan, in 1952. In 1965, Moore found her true calling when she became a freelance writer and began to write children's literature. She published 21 children's novels.

Moore lived on a small farm in Bethlehem until her death on September 23, 2001, of Parkinson's disease.