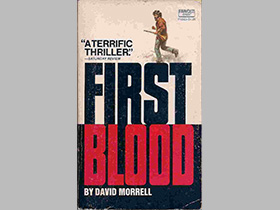 Penn State alumnus David Morrell was born in 1943. He emigrated from Canada to seek his M.A. from Penn State in 1966. After this education, he moved to Iowa where he began writing novels and teaching. His signature novel appeared shortly thereafter: First Blood, the novel that introduced the 1980s iconic figure, Rambo. He has continued to write novels and receive awards for his work. He currently lives in New Mexico.

David Morrell was born in Kitchener, Ontario, on April 24, 1943. His parents were George Morrell, a Royal Air Force bombardier, and Beatrice (Markle) Morrell Bamberger, an upholsterer. His father was killed during World War II, shortly after Morrell's birth. Experiencing difficulty raising Morrell by herself, his mother put him in an orphanage, and he later lived in a series of boarding homes. In 1965, Morrell married Donna Maziarz, an editorial assistant, with whom he had a son and daughter. The couple's son died of bone cancer in 1987. Receiving a bachelor's degree from the University of Waterloo in 1966, Morrell attended Pennsylvania State University from 1966 to 1970, where he earned his master's degree and doctorate in English. Morrell also graduated from National Outdoor Leadership School in Wyoming. In order to make his stories more realistic, Morrell has sought training in wilderness survival, hostage negotiation, executive protection, antiterrorist driving, assuming identities, electronic surveillance, and weapons. From 1970 through 1986, Morrell taught American literature at the University of Iowa, and published a work on American novelist John Barth while simultaneously writing novels. Morrell is best known for his debut novel, First Blood. The novel received praise for its statement about war and commentary on the treatment of returning Vietnam vets. The protagonist of the story, John Rambo, who was later portrayed by Sylvester Stallone in a series of popular movies, was inspired in part by Morrell's father, and named after nineteenth-century French poet Arthur Rimbaud. Following his debut novel, Morrell wrote several mystery- adventure novels packed with espionage, assassination, and terrorism. Morrell's, The Brotherhood of the Rose, The Fraternity of the Stone, The League of Night and Fog, and The Covenant of the Flame have all become bestsellers. Morrell received a Distinguished Recognition Award from the Friends of American Writers in 1972 for First Blood. His story, Orange is for Anguish, Blue for Insanity won Morrell the 1988 Bram Stoker Award for long fiction from the Horror Writer's Association, an award he won again in 1991 for The Beautiful Uncut Hair of Graves. He has been nominated twice for World Fantasy Award for best novella. As recent as 2009, Morrell was presented with the ThrillerMaster Award from the International ThrillWriters (ITW). Morrell currently lives in Santa Fe, New Mexico where he continues to write. His most recent books include The Spy Who Came for Christmas, The Shimmer, and The Naked Edge.