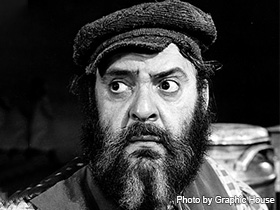 Comedic actor Zero Mostel (The Producers, A Funny Thing Happened on the Way to the Forum) died in Philadelphia during rehearsals for a stage play.

Born in Brooklyn, New York, in 1915, Zero Mostel began his career as an artist and teacher and then later became a comedian and actor. He is recognized for his explosive presence, abrupt character transformations, and improvisation in television, movie, and Broadway roles. Mostel died in 1977 in Philadelphia, Pennsylvania.

Samuel Joel Mostel, also known as Zero Mostel, was born in Brooklyn, New York, on February 28, 1915. He was born into a Jewish Orthodox family and was one of eight children. His parents, Israel and Cina Mostel, were born in Europe, but immigrated to the United States in 1898 and 1908, respectively.

Before going to college, Mostel developed a strong talent in painting and drawing. He developed his interest and skill by taking art classes given by the Educational Alliance. Mostel attended the City College of New York and graduated in 1935 with a bachelor's degree. Afterwards, he went on to New York University to obtain a Master's degree, but dropped out after a year.

After dropping out of school at New York University, Mostel was hired by the Works Progress Administration's Federal Art Project to teach drawing and painting at the Young Men and Women's Hebrew Association in Manhattan, New York, in 1937. While teaching, he married Clara Sverd in 1939. They later divorced because of Mostel's long hours spent at the art studio and his inability to provide for her. In order to pay the bills, Mostel provided gallery lectures at museums under the Work Progress Association. During these lectures, Mostel constantly made jokes and clowned around. Because of his entertainment at these parties, Mostel was hired to entertain at private parties.

Mostel was successful at entertaining the party guests, so he decided to audition as a comedian at the Caf?? Society in 1941. He was first turned down. However, in 1942, Mostel was hired to entertain soldiers after the bombing of Pearl Harbor. Mostel had made his debut as a comedian. It was at this time that Mostel was given his nickname by the press agent of the Caf?? Society. Mostel would be known as Zero for the rest of his career. He was nicknamed Zero after the press agent said, "Here is a guy starting from nothing." Zero later commented on his nickname saying, "If people know your name, you're famous. If they only know your face, it doesn't count. It's the name. One reason I became Zero was so if I accomplished only a middle level of fame, I still wouldn't be a zero. If you know my name, how can I be a zero? Smart, huh?" Mostel quickly became a success. In 1942, Zero made his Broadway debut in Keep 'Em Laughing, which ran for 77 performances and was a hit.

In 1943, Mostel served briefly in the army but was honorably discharged due to an unknown physical disability. He remained overseas during the remainder of the war to entertain troops. After returning home from serving the troops, he married Kathryn Harkin in 1944. Harkin was a New York City Rockette. Kathryn and Mostel had two sons, Josh and Tobias. They stayed together until Mostel's death in 1977.

Mostel's career as an actor took off. He made his television debut in the series Off the Road on October 19, 1948. Also, he appeared in The Ford Theater Hour, another television show, in the episode "The Man Who Came to Dinner." In the early 1950s, Mostel appeared in many films. He appeared in Panic in the Streets after being reunited with Elia Kazan, the director, at the Caf?? Crown. He won his first Oscar in 1950 for this film. In 1951, he appeared in Sirocco, The Guy Who Came Back, The Enforcer, and The Model and The Marriage Broker.

In 1955, Jerome Robbins called Mostel a communist because of his leftist views. He said this before the House of Un-American Activities Committee and was subpoenaed to testify before the HUAC. Mostel denied being a communist and refused to name names. He was blacklisted because of this, along with many other actors and artists at the time. Being blacklisted resulted in losing gigs at nightclubs and having a difficult time finding roles. In order to get by, Mostel had to play small gigs for little pay and sell his paintings.

In 1958, Mostel lucked out and was offered the lead role in Burgess Meredith's production of Ulysses in Nighttown. His performance as Leopold Bloom landed him an Obie award, and he starred in productions of Nighttown in London and Paris. After being out of television for about four years, Mostel was again making appearances. He appeared in The Play of the Week, and he was cast in The Good Soup in 1959.

In January 1960, Mostel was hit by a bus, which resulted in a severe leg injury that required multiple surgeries and a five month stay in the hospital to regain use of his leg. Shortly after recovering, he returned to Broadway and won a Tony award for his performance in Rhinoceros, which would turn out to be one of his best and most recognized performances. Another one of his most renowned performances was in A Funny Thing Happened on the Way to the Forum. Being cast in this Broadway production meant Mostel had to work with Jerome Robbins, the man who had gotten him blacklisted. When asked to work with Robbins, Mostel said, "Of course I will work with him. We of the left do not blacklist." A Funny Thing Happened on the Way to the Forum was a huge hit and ran for 964 performances and won six Tony awards.

During the same time period, Mostel played Tevye, the milkman in the Fiddler on the Roof, originating the role. Mostel appreciated the work of the author, Sholem Aleichem, so much that he insisted that the musical incorporate more of the author's style. This made a big impact on the play's success. Mostel also sang songs in the musical, such as "If I Were a Rich Man," which gave the distinct sound of a man singing a prayer at a synagogue. This was yet another one of his best performances, and he quickly won his third Tony Award. Between 1964 and 1972, Fiddler on the Roof ran for eight years for a total of 3,242 performances. It was honored as one of the greatest Broadway shows ever. It won nine Tony awards in 1965.

In the later years of his life, Mostel appeared in many more productions, such as a movie production of A Funny Thing Happened on the Way to the Forum in 1966 and The Producers in 1968. Mostel's role as Max Bialystock in The Producers was his most well-known and recognized performance. He acted alongside Gene Wilder, who played Leo Bloom. This film won an Oscar for Best Writing, Story and Screenplay and was nominated for a Golden Globe for Best Motion Picture Actor in a Musical/Comedy. In 1976, Mostel appeared in The Front, which was a movie about the Blacklist, and The Merchant in 1977. He also had successful revivals of Ulysses in Nighttown in 1974 and the Fiddler on the Roof in 1976.

During a tryout performance of The Merchant in Philadelphia, Pennsylvania, Mostel fell ill and was hospitalized. On September 8, 1977, Zero Mostel died of a heart attack. Samuel "Zero" Mostel was one of the great actors of his time and left a legacy of great performances.