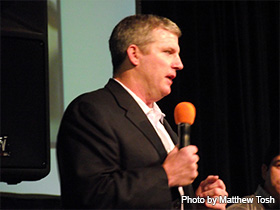 Football player and coach Michael Munchak was born in Scranton.

Michael Munchak was born on March 6, 1960, in Scranton, Pennsylvania. He went to the Pennsylvania State University (Penn State) and then was drafted eighth overall in the 1982 National Football League (NFL) draft by the Houston Oilers. He played for twelve seasons with the Oilers. Munchak was a nine-time Pro Bowler and a two-time First Team All Pro player. He was inducted into the Hall of Fame in 2001. From 2011 to 2013, Munchak was head coach of the NFL's Tennessee Titans.

Michael Anthony Munchak was born on March 6, 1960, in Scranton, Pennsylvania, to Michael and Paula Munchak. Young Munchak grew up with five sisters as an only son. His sisters treated him like royalty; they would cover his Scranton Times newspaper route just so he could go to football practices. Because there was no football organization in Munchak's neighborhood, his father and a couple of the other kids' fathers got together and formed a league of their own called the "East Scranton Apollos." Here is where his father learned how talented Munchak was at football. Young Munchak would always go up to his father and ask "How do I look? Did you see me miss that block?" Munchak would spend hours in the basement lifting weights; he knew how much time he had to be down there to lift and when his friends would come over and ask him to do something, he would always say "no," that he was too busy. He would recall in his Hall of Fame Induction speech: "Going all the way back to Pop Warner league days, my interest in football was fostered by a group of neighborhood dads, including my own, who formed to coach our team, the Scranton Apollos - Mr. Chapman, and Mr. Gavern, Mr. McCarthy, Mr. Donachie, and Mr. Farber, and my dad taught me the fundamentals of the game and they made it fun."

Michael Munchak went to Scranton Central High School. When Munchak started high school football, he was a fullback. In his senior season, he led his team with 792 rushing yards. Munchak was always a down-to-earth person, but when he went onto the football field, he was a completely different person: mean. The July 6, 1977, Sports Illustrated nominated Munchak for its 1977 All-American high school football team. From his excellent performances, he received a number of scholarship offers to colleges and universities. He chose to attend the Pennsylvania State University (Penn State).

On May 2, 1979, Penn State coach Joe Paterno announced during the team's spring Blue and White Game that Munchak would start at offensive lineman that fall. In his very first game with the Nittany Lions, Munchak played at the right guard position. On December 22 that year, Munchak suffered his first injury, twisting his left knee. He later said, "I felt it tear." On June 5, 1980, Penn State sent Munchak to Portland, Oregon, to rehabilitate the cartilage in his left knee. His next season was brief, including only three games played. Munchak underwent more surgery to remove damaged cartilage that had not been removed during his first operation. Penn State redshirted him, giving him another year of eligibility. He played all four years of his college football career at Penn State.

Michael Munchak was the eighth overall player and the first lineman to be drafted in the 1982 National Football League (NFL) draft by the Houston Oilers. He was a first-year starter on the offensive line as a rookie, but his rookie season was cut short due to a players' strike that cancelled weeks three through nine. In Munchak's first game back after the strike, he suffered a hairline fracture of the left ankle. He only played one more game in his rookie year. In his third year in the League, he was named to the first of seven All-AFC teams. That same year he received the first of his nine Pro Bowl invitations. The Houston Oilers improved every year behind their big lineman. The Oilers went to the playoffs for seven consecutive years and won the 1991 and 1993 AFC Central Division titles. Munchak was considered the key to their offence and their offensive line.

Michael Munchak was a nine-time Pro Bowler and a two-time First Team All-Pro. He was also honored with a street named after him in his hometown of Scranton. He played twelve seasons in the NFL, all with the Houston Oilers. Munchak played in 159 regular season games. His twelve seasons with the Oilers tied him for second longest in the franchise's history at the time of his retirement.

After he retired from the NFL, he became Houston's Offensive Assistant in 1994, serving in that position for three years. In 1997, the Houston Oilers moved to Nashville and Munchak was promoted to Offensive Line Coach, a position in which he served for fourteen years.

In 2001, Michael Munchak was inducted into the Hall of Fame. At his induction ceremony, he thanked many of the people who had encouraged him along the way: family, friends, coaches. He even paid tribute to his home town: "I need to especially thank now my hometown of Scranton, Pennsylvania, for all the support they have shown me throughout my career. For 12 years, they have piled on busses to go to away games all over the East Coast. And even flew to Houston when I retired. I think that kind of following is unheard of, especially for an offensive lineman. It is greatly appreciated. Thank you all."

In 2011, Munchak was named the Tennessee Titans' head coach. He was only the seventh Hall of Fame player to become a coach in the NFL. He was also the only former player to coach the team. "Mike has been successful at everything he has been associated with at our franchise and I have no reason to believe that he won't be successful as our head coach," owner of the franchise, Bud Adams, said in a statement. "He earned Hall of Fame distinction as a player and yearly he has been one of the best offensive line coaches in the NFL. He understands where we have been and knows where we need to go." After Munchak was hired as the team's head coach, he said "I think it's a great opportunity here with what we have, and I think I'm the guy to pick up the pieces and hopefully get us in the right direction."

Munchak was also looked at by his alma mater, Penn State, to fill the coaching vacancy that arose in the fall of 2011. The university placed Munchak high on their list of possible coaches. At the time, Munchak said: "If the opportunity was offered I would more than likely take it." He would eventually, however, turn it down and remain in the pro ranks.

Following the 2013-2014 season, changes came for the Scranton native's career. After a three-year record of 22-26, Titans management brought Munchak to their Houston headquarters for a lengthy meeting. After a period of reflection, Mike Munchak's tenure as head coach of the Titans would come to an end. Jim Wyatt reported in the Nashville Tennesseean that Munchak could likely have stayed on in that position, if he had been willing to fire a number of assistant coaches. Munchak said, "This is a day I hoped would never come, but there is a reason for everything. Words cannot express the sadness for leaving this organization that I have been a part of for over 30 years." Later in January 2014, Munchak was hired by the Pittsburgh Steelers to coach its offensive line.