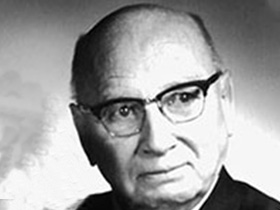 The Myers were in their 60s when Highlights was first published. It was the realization of their lifelong dream to create a good magazine for children.

Dr. Garry Cleveland Myers and Caroline Elizabeth Clark Myers were married on June 26, 1912. Both very well educated, they strived to spread the importance of education to parents and children everywhere, and did so as they toured the United States from 1941 to 1946. Their passion for children as well as education inspired parents throughout the country who took the Myers' advice and listened to their lecture, articles, and books. In 1946, after many years of lecturing and learning, the couple founded the children's magazine Highlights for Children in Honesdale, Pennsylvania. Garry Cleveland Myers held the position of editor-in-chief until the time of his death in 1971. Caroline also remained a very large part of Highlights for Children until her death in 1980 at the age of 93.

Garry Cleveland Myers was born on July 15, 1884 in Sylvan, Pennsylvania. A very well educated individual, he graduated from Ursinus College in 1905 with a bachelor's degree. He then went on to attend the University of Pennsylvania as a graduate student from 1909 to 1910 and then finally received his doctorate from Columbia University in 1913. Dr. Cleveland served in the United States Army as a captain in 1918 during World War I. He not only served as a captain, but also participated in the education of illiterate soldiers during that time. Dr. Garry Myers was also an active member of many prestigious organizations such as the American Psychological Association as well as the National Society for the Study of Education. Always a teacher, Garry Cleveland Myers served as an educator at various universities as well as training schools. From 1912 to 1914 he served as a professor of both psychology as well as social science at Juniata College located in Huntington County. He also taught at what is known today as Case Western Reserve University as well as the Brooklyn Training School for Teachers.

Garry Cleveland Myers and Caroline Clark Myers started a minor revolution in 1946 when they founded Highlights for Children in Honesdale, Pennsylvania. This was not just a magazine for children; it was so much more. Highlights for Children taught children about not only academics, but about life. Both Garry Cleveland Myers and Caroline Clark Myers had a lengthy background in teaching. Dr. Garry Cleveland Myers began when he received his PhD in psychology from Columbia University. Using his knowledge of psychology, he came to the aid of troubled parents as he composed a weekly newspaper column entitled 'Parent Problems.' Dr. Myers not only came to the aid of parents but also their children as he wrote several books such as For Beginning the School Day, in which he encourages children that school and learning are wonderful things and that we would be nowhere without our education. Collectively, the Myers composed several books where they came to the assistance of parents of children who were struggling with their academics in one way or another. These books taught parents about why their children were feeling this way and about how they could change these attitudes that their children possessed. Perhaps the reason that the advice given by Dr. and Mrs. Myers was so useful and inspiring was because the knowledge which they both had acquired did not come solely from earning a degree, but rather from first-hand experience in raising their three children Jack, Garry Jr., and Elizabeth.

For five years, from 1941 to 1946, the Myers' spent much of their time traveling the United States speaking to children in their classrooms. At the time they were both working for Children's Activities, which was a magazine made for the entertainment of children. When their lecturing came to an end in 1946, Highlights for Children was born. Mrs. Myers accredits this traveling as the inspiration from which the idea of Highlights for Children sprung. One of the most amazing things about both Dr. Garry Cleveland Myers as well as Mrs. Caroline Clark Myers is that even once their business had gotten underway and had proven to be quite successful, they did not call it quits and leave the business to be run by others; they both remained very involved in all aspects of the business: Caroline as managing editor and Garry as editor-in-chief.

The marketing technique used by Highlights for Children was quite unique. Displayed as reading material in the waiting rooms of doctors and dentists across the country, children, as well as their parents, were able to explore the magazine. Inside the magazine, readers would come across subscription cards which they could tear out and take home with them so that they could receive the magazine monthly in their own homes. However, it seemed as though readers were discouraged from being the first to remove a card from the magazine. Therefore, as a clever marketing technique, Highlights for Children began removing the first card in hopes that readers would see this and proceed to pull out a card for themselves. This suggestion worked beautifully, and Highlights for Children worked its way into the homes of many, many children.

The fact that the Myers were so passionate about what they did made all literary elements that they composed so meaningful. They learned most of what they knew from simply watching as their children and then their grandchildren grew right before their eyes. Highlights Magazine for Children is known worldwide and has touched the lives of many, many children throughout our country. As educators they taught parents and children just how important education is to living a meaningful life.

Garry Cleveland Myers held the position of editor-in-chief until the time of his death in 1971. Caroline also remained a very large part of Highlights for Children until her death in 1980 at the age of 93.