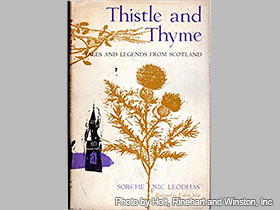 Sorche Nic Leodhas was a long-time librarian at the Carnegie Library in Pittsburgh and an author of children's book.

Sorche Nic Leodhas was born Leclaire Alger on May 20, 1898, in Youngstown, Ohio. Alger was long-time librarian at the Carnegie Library in Pittsburgh, Pennsylvania, where she also wrote children's books. It was only after Alger's retirement from the library that she began to write and publish Scottish tales for children at an incredible rate. At this same time, Alger adopted the name "Sorche Nic Leodhas" Scots Gaelic for "Claire, daughter of Louis." She received a Newbery Honor Medal for her work on Thistle and Thyme: Tales and Legends from Scotland (1962), a collection of Scottish legends. Leodhas continued to write and publish books until her death on November 14, 1969.

Sorche Nic Leodhas, children's author and librarian, was born Leclaire Alger on May 20, 1898, in Youngstown, Ohio, just south of Lake Erie, to Louis Peter Gowans. Since she was often sick as a child, her parents believed it would be to her benefit to be home-schooled. When she was only three, Alger's father taught her to read. By the time she was five, she was already reading Charles Dickens' David Copperfield. Alger did, however, admit in the Bulletin Index that she "skipped [David Copperfield's] love parts."

In 1915, Alger went on to work as a page at the Carnegie Library in Pittsburgh, Pennsylvania. She married her first husband, Amos Hoffman, in 1916. Two years later, in 1918, Hoffman died of unreported causes. According to Contemporary Authors Online (CAO), Alger remarried several years later, but the exact date is unknown. In 1921, she moved to New York to work at the New York Public Library. She stayed there until 1925. Alger went back to Pittsburgh in 1926 to attend the Carnegie Library School from which she received a degree in 1929. She continued to work at several branches of the library while simultaneously publishing the children's books Jan and the Wonderful Mouth Organ (1939), Dougal's Wish (1942), and The Golden Summer (1942). The last of Alger's books won Harper's Typographical Prize in 1942. Alger retired from the library in 1966.

Shortly before her retirement, Alger began to write and publish stories under the pseudonym Sorche Nic Leodhas. It is said that Alger chose the name because it means "Claire, daughter of Louis" in Scots Gaelic. Leodhas' children's books, according to The Continuum Encyclopedia of Children's Literature, were about Scottish "stories, superstitions, songs, and poems." Leodhas' fascination with the Scottish tales was the result of familial influence. Her family had a long tradition of collecting unpublished poems for their own enjoyment. Janice M. Del Negro of the Children's Literature Network wrote that Leodhas heard the tales "at clan gatherings, family reunions, ceilidhs [Scottish social gatherings], and Gaelic club meetings, and she remembered them with a faultless ear and a musical tongue the likes of which we'd be hard-pressed to find even in today's most well-retold folktales."

Leodhas' writing was influenced by her sister and father, both of whom were freelance writers. Her writing was described by Del Negro as being "lyrical and poetic; her elegant language lent itself to the romantic, the adventurous, the humorous, and the uncanny with equal dexterity." Contemporary Authors Online quotes a Chicago Sunday Tribune critic as saying, "even television has not learned to spin richly imaginative adventures to match those . . . from the storyteller's heart."

Like Del Negro and the Chicago Sunday Tribune critic, many others regarded Leodhas' work as worthy of praise. Many of Leodhas' books won awards. In 1963, she won the Newbery Honor Medal for her work on Thistle and Thyme: Tales and Legends from Scotland (1962), a collection of Scottish legends. Many of Leodhas' books also received praise for their illustrations. All in the Morning Early(1963) won the Caldecott Honor Medal in 1964 for Evaline Ness' illustrations. In 1966, Leodhas' Always Room for One More(1965) won the Caldecott Medal for Nonny Hogrogian's accompanying artwork.

One of these eloquently written stories was the 1965 award-winning Always Room for One More. According to CAO, the book came from a Scottish folk song about a man, Lachie MacLachlan, who was so hospitable that his small house soon became too full. Leodhas' 1971 book Twelve Black Cats and Other Eerie Scottish Tales is a collection of spooky tales. In "The Weeping Lass at the Dancing Place," Leodhas tells of a young woman who, through mourning the loss of her lover, causes him such a state of unrest in death that he pays one last frightening visit to her.

Leodhas continued to write and publish works until her death on November 14, 1969 in Wilkinsburg, Pennsylvania, at the age of 71. Leodhas' memory lives on through the multitude of Scottish tales that might have been forgotten if not for her.