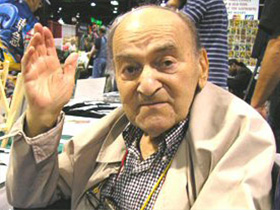 Martin Nodell was born on November 15, 1915 in Philadelphia, Pennsylvania. After moving to New York City in the 1930s, Nodell worked with Fox Comics and Ace Comics to create characters such as Dr. Doom, The Raven, and Sands of Doom. In 1940, he started working at DC Comics where he created the Green Lantern with writer Bill Finger. In 1947, he moved to Marvel where he drew characters such as Captain America and the Human Torch. Nodell died December 9, 2006 at a nursing home in Muskego, Wisconsin.

Martin "Marty" Nodell was born on November 15, 1915 in Philadelphia, Pennsylvania. He studied at the Chicago Academy of Art and the Chicago Art Institute, and moved to New York City in the 1930s to study at the Pratt Institute.

In 1938, Nodell got his first job in comics doing freelance work. He got his start with Fawcett Comics where he created Streak Sloan. In 1940, he worked on characters such as Larry Hannigan, Sands of Doom, The Raven, and Buck Steele for Ace Comics and Dr. Doom for Fox Comics. That same year, Nodell landed a job at All-American Comics, also known as DC Comics, where he created the Green Lantern with writer Bill Finger.

Nodell was inspired by the Green Lantern idea by waiting for a New York subway, and he saw a train operator waving a lantern with a green light. According to USA Today, "Nodell imagined a young engineer, Alan Scott, a train crash survivor who discovers in the debris an ancient lantern forged from a green meteor. Scott constructs a ring from the lamp that gives him super powers and becomes a crime fighter."

In a 2000 interview with Bill Black, editor and publisher of AC Comics, Nodell said, "I picked out the name from the train man on the tracks who was waving a lantern, going from red to green...green meant go and I decided that was it. Then I needed a colorful and interesting costume. I was interested in Greek mythology and so the costume took on elements of that. It just all fell into place."

The Green Lantern appeared in July of 1940 in an eight-page story comic book, and it had its own comic series, where Nodell drew it under the name of Mart Dellon. Nodell continued drawing the Green Lantern till 1947 when he left DC Comics and worked for Timely Comics. The Green Lantern was later cancelled in 1949 but resumed publication in 1959.

According to The Comics Reporter, "the Green Lantern character is an interesting one for superheroes" and "a perfect match for the comic book form in which anything could be drawn by an artist with an active imagination. In a way, the Green Lantern character could be said to be the most comic bookish superhero of them all, enjoying a status on that level with characters like Batman and Superman as the best-realized of the single-device superheroes."

At Timely Comics, also known as Marvel, Nodell drew characters such as Captain America, the Human Torch, and the Submariner until 1950 when he left the comic book industry. Nodell's comic career only lasted for 12 years. He decided to pursue a new career as an art director for the Leo Burnett Agency, an advertising agency, where he was on the design team that developed the Pillsbury Doughboy.