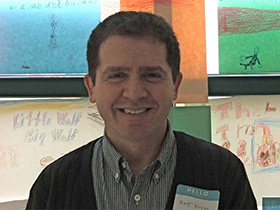 Matt Novak is the author and illustrator of the acclaimed Mouse TV and Newt.

Matt Novak is an author and illustrator of children's books including Mouse TV (School Library Journal Best Book of the Year and Parent's Choice Honor Book in 1994) and Newt (Children's Choice Award bookin 1997). He has illustrated over 30 books. He also worked as an animator on various Disney features including Beauty and the Beast, Rescuers Down Under, and Rollercoaster Rabbit.

Matt Novak was born in Trenton, New Jersey, on October 23, 1962. He is the son of Theresa Belfiore Novak. His maternal grandfather, Attilio Belfiore was an Italian immigrant who worked as a coal miner in Shenandoah, Pennsylvania. He grew up in the small town of Sheppton, in Schuylkill County.

Novak's website mentions that he spent a great deal of time daydreaming during his growing up years in Sheppton. As long as he can remember, he has created stories and pictures, many times these stories would be realized as puppet shows and animated films produced with his super-8 movie camera. He entertained and performed for family and friends from a very young age. He continues to delight young readers today with his children's books that many times feature colorful, lively characters that are involved in humorous situations that often explore real-life situations. According to Something About the Author (104), Novak's books for preschoolers and elementary school readers center on a variety of phenomena guaranteed to capture the attention of a child. Subjects in his books include alligators, salamanders, robots and television.

Novak worked as a puppeteer for the Pegasus Players from 1979 to 1983. He attended Kutztown State University (now Kutztown University) from 1980-1981 and worked as a Disney animator in 1983. His first children's book, Rolling, was created while he was studying at the School of Visual Arts in New York. He had a contract for the book before he graduated in 1985. After graduation, he began teaching at both the Parsons School of Design and St. Benedict's Preparatory School. Novak returned to work at Walt Disney World in Florida as an animator from 1989 to 1991. The projects he worked on at Disney included Beauty and the Beast, Rescuers Down Under, Rollercoaster Rabbit, Roger at the Opera (an unproduced Roger Rabbit Short Film) and Off His Rockers.

In 1994, Mouse TV was named the School Library Journal Best Book of the Year and Parents' Choice Honor Book. Mouse TV follows the story of a large mouse family with only one television set. Each family member wants to watch a different program which results in conflict. Novak depicts the turmoil in an amusing way that tickles young readers. When the television quits working, the mice are surprised to discover that there are plenty of great ways to spend time, including reading, and playing games. School Library Journal reviewer Steven Englefried wrote, "The cleverest aspect of the message is that TV-watching is never condemned or criticized...Instead, Novak gently, and quite successfully, shows that there are countless ways to enjoy oneself as an active participant rather than as a passive viewer."

Newt, an I-Can-Read title, was a Children's Choice Award book named by the International Reading Association and the Children's Book Council in 1997. In three related stories Newt, a small salamander, befriends a mouse, defines a bug, and comforts the moon. Roger Sutton, in a The Bulletin of the Center for Children's Books review wrote, "Illustrated with Novak's zappily amiable cartoons, these episodes wear their lessons lightly and give new readers a hero who deserves at least another book of his own."

In the picture book The Robobots, Novak introduces a family of blue mechanical-looking creatures who move to a new and unfriendly neighborhood. Their names are D.A.D., M.O.M., Widget and Toggle. When D.A.D. looks for a job, no one will hire him. When M.O.M. goes shopping, no one will sell her anything. Widget and Toggle are not allowed in school. In a review for WPSU's Bookmark program, Karla Schmit notes that, "at this point in the story, children often express understanding what it feels like to be different or to be rejected. Through discussion, they find hope in the Robobots' optimistic attitude." At the end of the story all of the neighbors agree that the Robobots are a family worth knowing. The bright, bold colored illustrations are acrylic on watercolor paper and add a number of details about the story that aren't written in the text.

Through the years Novak has used many different mediums and techniques. He says, "I try to find just the right look for each book. I feel each story has a certain sensibility that needs to be addressed, and if this means changing styles every now and then, that's okay. I try to remain open to that possibility. Right now, I am creating my illustrations digitally. I love the flexibility inherent in this way of working."

The process of creating picture books is different for each author. A central question is: what comes first, the text or the images? Novak says, "It depends on the book. Some begin with sketches, but others begin with the written word; most of the time I am working on pictures and words at the same time playing them off each other—gaining inspiration in both directions."

Novak adds that he typically "tries to have 2 or 3 projects in the works at the same time; usually at different stages of development." He states that "I may be doing finished illustrations for one, sketches for another, and writing for another. I'm always working on new idea whether I'm just jotting down notes or sitting at the computer or drawing table."

Talking with kids is one of Novak's favorite pursuits. He enjoys making school visits to share his ideas about writing and illustrating stories. He draws at every session, showing how words and pictures work together to bring a story to life. His presentations include a great deal of audience participation with the emphasis on using one's imagination. He uses improvisation, silly voices, zany mannerisms and goofy jokes to pull all the elements together. He hopes that he inspires children to come up with many ideas and be creative on their own.

In addition to writing and illustrating children's books, he is an Executive Producer at Zam Studios, which he co-founded with Victoria Novak. Zam Studios produces animation and special effects for television, video, web, and interactive markets. Novak is also an instructor at the Pennsylvania College of Art and Design. The traditional and digital courses he teaches revolve around all aspects of drawing, graphic design, illustration and animation. Novak was curator for the Art of Animation exhibit which included original artwork from Disney, Plympton, and Big Idea. He lives with his family in Carlisle, Pennsylvania.