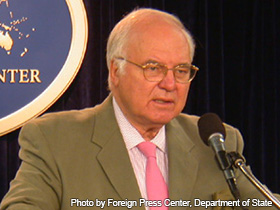 The philosophy of government wasJohnstown native Novak's forte,This Hemisphere of Liberty: A Philosophy of the Americas(1990) is one example.

Michael Novak was a distinguished Roman Catholic conservative scholar who dedicated his entire life to theologian and political studies. He grew up in Johnstown, Pennsylvania, where he attended Catholic school as a youngster and then went on to attend three prestigious universities, Stonehill College, the Gregorian University in Rome, and Harvard University, respectively. He pursued a career as a writer and professor, but was also a former US Ambassador and White House Advisor of Ethnic Affairs. He wrote over 500 articles and reviews, and his twice-weekly column, Illusions and Realities, was syndicated nationally from 1976 to 1980 and was a Pulitzer Prize finalist in 1979. Of the total 25 books he wrote his most celebrated is, The Spirit of Democratic Capitalism (1982), as it best represents his perspective on how ethical principles and theological philosophies form the foundation of a free, capitalist-based democratic economy. Novak died on February 17, 2017, at the age of 83.

Novak's career began with preparing for the priesthood while upholding steadfast democratic socialist sentiment. However, after further reflection of human affairs, he converted to become an ardent capitalist advocate, viewing its free market and society as components of a more efficient system in which his Catholic religious beliefs would inevitably thrive. His views on capitalism, in which religion and culture are intertwined with every facet of life, including economics and political affairs, are best expressed in his 1982 masterpiece titled, The Spirit of Democratic Capitalism. In this book, he demonstrates the superiority of capitalism over socialism while delineating his personal theory of how to promote democratic capitalism through infusing it with Christian virtues. For this piece, Novak was awarded the Antony Fisher Prize in 1992, given to authors for works that substantially increase public awareness of the free society. Throughout his primary vocation as an author, he sought to emphasize the efficacy of democratic capitalism by implementing a variety of ethical and theological arguments into his works. Aside from his literary accomplishments, he also held several notable professorship positions at universities such as, Harvard, Stanford, Syracuse, and Notre Dame. He was appointed advisor of the White House Office of Ethnic Affairs during the Ford and Carter administrations and served as Ambassador of the United States Delegation to the United Nations Human Rights Commission in Geneva from 1981 to 1982. Among other rewards, in 1994 he received the Templeton Prize for Progress in Religion as a result of his tremendous contributions to theological research and promotion of Christian teaching on economics. He was recognized internationally for his theological insights and advancements in public policy, in places such as Italy, Germany, and the Republic of Slovakia. He held the position of George Frederick Jewett Chair in Religion, Philosophy, and Public Policy at the American Enterprise Institute in Washington, DC, where he wasalso Director of Social and Political Studies. All of Michael Novak's remarkable accomplishments stemmed from his scholarly interest in theology and his desire to merge social democracy and capitalism through Catholicism.

Michael Novak died due to complications from colon cancer on February 17, 2017, at the age of 83.