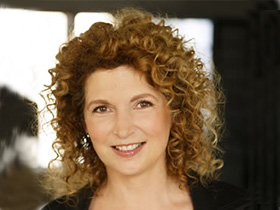 Tawni O'Dell is a novelist from Indiana, Pennsylvania, whose primary focus is in writing true-to-life struggles in the “coal country” small town setting. O’Dell worked as a journalist for many years before shifting her focus to full-time authorship. She has published several novels and has also experimented with other forms, such as playwriting and podcast scripting. Her first book, Back Roads (2000), achieved national and international praise, remaining on the New York Times bestseller list for nine weeks.

Tawni O'Dell was born in Indiana, Pennsylvania, a town in the Allegheny Mountain region of the state. She developed a love of reading at age four after reading Go, Dog. Go! by P.D. Eastman. Her love of writing came at age eight. Influenced by the writing of Roald Dahl, O'Dell tried writing short stories and continued to write throughout her childhood. She has stated that reading Harper Lee's To Kill a Mockingbird at age ten changed her forever. Although she grew up with a love for books and animals, O'Dell never felt that she really fit in as a child. She struggled to get past stereotypes, which later became a major theme in her books.

After high school, O'Dell was the first member of her family to go to college. She attended Northwestern University in Chicago and earned a degree in journalism, graduating with honors. She worked as a reporter for newspapers in Florida, Pennsylvania, and Massachusetts before shifting to working full-time on her novels. After getting married and having two children, O'Dell decided to stay at home with her children full-time and work on her writing.

Her first book, Back Roads, was published in 2000. It spent nine weeks on the New York Times bestseller list and was an Oprah Book Club pick. Since its publication, Back Roads has been translated into many languages, including French, Dutch, Swedish, Portuguese, and Turkish. The book was also turned into a major motion picture in 2018, to mixed reviews.

O’Dell’s favored setting is small town, “coal country” America, particularly Pennsylvania, and in these settings, she grapples with addiction and alcoholism, mental illness, and familial issues including death, dysfunction, and abandonment. These themes are carried throughout her subsequent publications, including Fragile Beasts: A Novel (2010) and One of Us (2014).

O’Dell has also been expanding into many different genres of writing. She wrote pieces for a ten-part podcast series Closing the Distance (2020), consisting of several short stories about people handling the Coronavirus pandemic and subsequent quarantine. O’Dell has also written one play, at the time of this writing, titled When It Happens to You (2020), in which she also plays a role. This play is an adaptation of her memoir and recounts the events and struggles of her family after her daughter was sexually assaulted. Part of its goal is to connect with and support other victims.

O'Dell's writing is largely influenced by William Faulkner and James Joyce. Her love of southern writers, including Truman Capote, William Styron, Carson McCullers, and Flannery O'Connor, also impacts her writing. The strong importance of place that is present in these writers' works is what makes their writing so influential to O'Dell. O'Dell wrote in an article posted on the Oprah's Book Club website that she likes writers who "bring significance to the insignificant," including J.D. Salinger and Nathanael West. She mentions that she tries to reread these authors' works every year. Lastly, O'Dell writes about the influence her grandfather, the late H.E. Burkett, had on her books. He often told her stories of Pennsylvania coal mining and made a strong impact on O'Dell's life.

After living in the Chicago area for 13 years, O'Dell and her family moved back to Pennsylvania in 2003. At the time of this writing, Tawni O'Dell continues to write and promote her books both nationally and internationally.