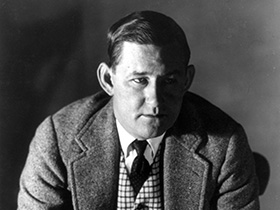 John O'Hara was born in Pottsville in 1905. Gibbsville, O'Hara's pseudonym for Pottsville, is the subject of many of his novels.

John O'Hara was born in Pottsville, Pennsylvania, in 1905. He went on to lead a very successful career in journalism. However, O'Hara's real passion was in fiction writing; he wrote 374 short stories and 18 novels throughout his lifetime. He also wrote a few screenplays before his death in 1970.

John O'Hara was born January 31, 1905 in Pottsville, Pennsylvania to Patrick Henry, a physician, and Katherine Elizabeth (Delaney) O'Hara. He married Helen Pettit in 1931, but they were divorced in 1933. O'Hara later remarried to Belle Mulford Wylie in 1937, and they had one child, Wylie Delaney. Unfortunately, his second wife died in 1954 and he was married a third time to Katherine Barnes Bryan in 1955.

O'Hara intended to attend Yale University, but the early passing of his physician father forced him to exchange his Ivy League aspirations for a random series of jobs that included newspaper reporter, steel mill worker, soda jerk, and gas meter reader in cities ranging from his native Pottsville to Chicago and New York. Writing was what attracted him, and in New York he worked mainly as a writer at several different publications including The Daily Mirror, The Morning Telegraph, and Time magazine. By 1932, his short stories were appearing regularly in The New Yorker and in 1934 his first novel, Appointment at Samarra (1934), was met with critical acclaim that paved the way for O'Hara to briefly become a Hollywood screenwriter and induced the author to write fewer short stories in favor of novels. During WWII O'Hara abandoned fiction to be a correspondent in the Pacific theater, but he returned to novel writing after the war. He would write 18 novels in all and an astounding 374 short stories.

Many of O'Hara's works described modern society from within a fictional Pennsylvania town, Gibbsville, based on the author's native Pottsville, which he called his Pennsylvania Protectorate. Fifty-six of his short stories, and several novels, including Appointment at Samarra and Ten North Frederick(1955) are set in the small town. Many others, including Butterfield 8 (1935), From the Terrace(1958) and A Rage to Live(1949) are also set in Pennsylvania. O'Hara's work was popular in Hollywood, and several of his novels were adapted for the screen, including Butterfield 8 which starred Elizabeth Taylor, and Pal Joey(1940) which featured Frank Sinatra in the title role.

O'Hara was a commercially successful if not always critically acclaimed author. His unconcealed desire for honors and awards may have dissuaded some institutions from rewarding the author for his work. He did receive a New York Critics Circle and a Donaldson Award for the musical based on Pal Joey in 1952. Four years later he was given the National Book Award for Ten North Frederick, and in 1964 he was presented with the Gold Medal Award of Merit for the Novel from the American Academy of Arts and Letters. He is remembered now for his keen insight into modern materialistic society and his short stories are regarded as his finest work.