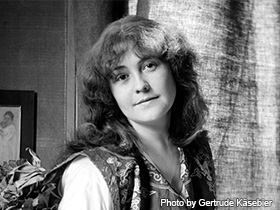 An illustrator of many talents, Wilkes-Barre native Rose C. O'Neill created the image of the Kewpie doll.

Rose O'Neill was born in Wilkes-Barre, Pennsylvania in 1874. At age 13, O'Neill won a children's art contest. Winning the contest gave her inspirations to pursue her career in illustration and she began a weekly cartoon series for the Omaha World Herald. Throughout her life she accomplished much and received many honors. She published artwork in various magazine, newspapers and books while she struggles through separation from her family and two divorces. She remain focused on her career as an illustrator going on to gain recognition in France, awarded with the associate of the Société des Beaux Arts. Her most famous success can be seen in elf-like cherub creatures called Kewpies. Kewpies increased O'Neill's successes making her millions of dollars over her lifetime. O'Neill died in 1944.

Rose Cecil O'Neill was born June 25, 1874, to Asenath Smith and William O'Neill; her father, a book seller and mother a former school teacher. Throughout the early stages of her life, O'Neill possessed a divine interest in the arts. Her father encouraged her to be an actress and through both her parent's influences, she learned to appreciate Shakespeare, Chopin and others that significantly stood out among the arts. She absorbed the love of poetry from her father, who encouraged her to read books to retain knowledge that would benefit her especially as a young woman.

O'Neill began expressing herself through paintings in her adolescent years. While she attended Sacred Heart Convent, she won a prize awarded by the Omaha World-Herald, for an illustration she drew. Her family then moved to Ozark, Missouri. She stayed in Ozark for only a short time before opting to move to New York to pursue her dreams of being an artist. O'Neill enjoyed painting but could not escape her fascination with classical literature on Greek myths which later inspired her idea for the Kewpies.

In her later years, O'Neill began to sell illustrations to many of the prominent periodicals and her work appeared in such magazines as Collier's, Truth, McClure's and Harper's. Because the field was dominated by men at this time, she signed her work with her initials "C.R.O." In 1896, O'Neill married Virginia aristocrat, Gray Latham. They lived in New York where she worked as a staff artist for Puck. While at Puck, she signed over 700 drawings with the signature O'Neill-Latham. However, the two divorced in 1901 and she left her job with Puck and returned to her home, "Bonniebrook" in Ozark, where she wrote and illustrated for several magazines.

O'Neill felt safe at Bonniebrook and while she stayed there, she received letters from longtime admirer Harry Leon Wilson who was the literary editor for Puck. When news of her divorce reached New York, Wilson traveled to Bonniebrook to ask for O'Neill's hand. In 1902, the two were married. They moved from Ozark to Connecticut each to pursue careers in writing. O'Neill wrote her first book 1904 entitled The Loves of Edwy. O'Neill wrote a total of four novels.

Her marriage to Wilson was slowly coming to an end after six years. She divorced him over conflicting personalities and returned to Bonniebrook in Ozark. The time she spent at her home in Ozark inspired her with ideas for her illustrations that would impact the rest of her lifetime. In her earlier drawings, O'Neill had often drawn little creatures in the backgrounds of her work. These creatures "appeared to her in a dream," and were small "myth-like-elf" creatures that were greatly influenced by the Greek god of love, Cupid. She finally developed the tiny images hidden in her sketches and illustrations into characters. They became known as "Kewpies." They first appeared in Ladies Home Journal, in 1909.

The Kewpies were a success for O'Neill and the fad of owning a Kewpie spread quickly. O'Neill aspired to sketch a series of illustrations to increase the Kewpies popularity. In 1910, Kewpies became a series in the Woman's Home Companion. That same year O'Neill published her first children's book, The Kewpies and Dottie Darling. O'Neill went on to write, illustrate and publish other books featuring Kewpies.

From 1912 to 1914, O'Neill moved to Europe. The first Kewpie dolls were manufactured in Germany. O'Neill, with the help of her sister, Callista, became a successful business woman and her Kewpie licensing for products produced over a million dollars. O'Neill returned to New York but continued to travel back to Europe.

In April of 1921, the Galerie Devambez in Paris displayed an exhibit of her Sweet Monster drawings which consist of fauns, centaurs, satyrs, and other mythical creatures. She was awarded the associate of the Soci??t?? des Beaux Arts in France. In 1925, O'Neill returned to New York and to show her Sweet Monsters in the Wildenstein galleries. The Kewpies continued to generate massive profits for O'Neill and she spent time developing new characters similar to Kewpies such as Scootles.

In 1936, O'Neill retired to Bonniebrook. She often would say referring to her home Bonniebrook, "I love this spot better than any place on earth." While secluded at her home she wrote her autobiography. During these years, O'Neill also became active in the campaign for women's rights. She continued to illustrate until she suffered several strokes. O'Neill passed away on April 6 th, 1944 in Springfield, Missouri, at her nephew's home. She was buried at Bonniebrook. Today, The International Rose O'Neill Club hosts more than 900 active-members and Kewpies are still collected.