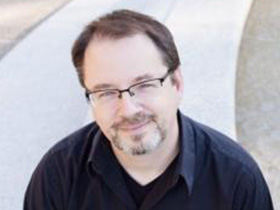 JeffOaks was the managing director of the Pittsburgh Contemporary Writers Series and teaches at the University of Pittsburgh.

Jeff Oaks was born and raised in upstate New York, yet has lived in Pittsburgh, Pennsylvania, for over two decades, contributing to the literary field through teaching and writing. He earned his MFA in Creative Writing from the University of Pittsburgh (Pitt) and at the time of this writing, teaches creative writing at Pitt, while serving as the Writing Program's Assistant Director. In 2013, Oaks was a featured poet in the Public Poetry Project of the Pennsylvania Center for the Book. He is the author of multiple poetry chapbooks, including The Moon of Books (2000), Shift (2010), and Mistakes with Strangers (2013).

After Oaks graduated from Pitt, he began to teach creative writing there. He says that his favorite part of being a professor is that, "I get to teach what I love." He also enjoys working with undergraduate students, who have a lot of energy and ambition and share that enthusiasm for writing with him. A memorable teaching experience occurred when a student asked him a question that, "allowed [him] to rethink the whole book." In this sense, he says he ends up loving a book even more because of the inquisitive points of view the students bring to class.

Oaks served as the Managing Director of the Pittsburgh Contemporary Writers Series at Pitt for many years, which brings notable writers, artists, and thinkers to give readings at Pitt's main campus at no cost to the public. The best part of working in that position was having the opportunity to invite and meet his favorite writers, which he considered, "A real treat." Oaks has since been promoted to Senior Lecturer and Assistant Director of the Writing Program.

Oaks has contributed to the literary field in several ways, including serving as a writer-in-residence for the Western Pennsylvania Writing Project from 1989 until 1999; this project aims to improve the teaching and reading of writing in western Pennsylvania schools. Additionally, Oaks served as the writer-in-residence at the Ellis School from 1994 to 1996 and formerly instructed Western Penitentiary inmates on writing.

He has written four poetry chapbooks: The Unknown Country (1992), The Moon of Books (2000), Shift (2010), and Mistakes with Strangers (forthcoming 2013). His poems are routinely published in literary magazines, newspapers, and anthologies — the latest include, Rhino, Field, Bloom, Court Green, Zocalo Public Square, and Poemeleon. His poem, "Saint Wrench," was selected to appear in, Best New Poets: 2012, by Matthew Dickman. Oaks also writes essays, which have appeared in My Diva: 65 Gay Men on the Women Who Inspire Them and Creative Nonfiction.

Oaks' writing process involves aiming to write for an hour each morning and for a couple of hours on weekends at a coffeehouse. He began writing seriously at age 17, but it wasn't until his undergraduate studies when he began to understand what it meant to be a writer and decided to pursue it as a career. Originally, he'd planned on becoming an entomologist — studying bees, ants, and centipedes — but found he was bored in many of his science classes. Oaks enjoys, "the physicality of getting into the language," and crafting various phrases and sentences, which is why he chose to specialize in creative writing as opposed to composition or literature.

Centipedes and ants do, however, find their way into his work, because he is interested in writing about day-to-day happenings and the things that are often overlooked. The poetry collection he is working on now is focused on giving voice to the ordinary and, "the idea of immensity inside of small things." Oaks argues that small things have their own universes, and he explores this concept though his writing.

As for advice to aspiring writers, he recommends reading as much as possible and writing as much as possible. Oaks believes that reading and writing should play an integral role in society and that people need those places where they can, "stumble into new discoveries," such as libraries. "Literacy should lead to compassion and empathy," which is needed in a democracy, he says. According to Oaks, writing and literacy allow people to consider multiple perspectives, solutions, and possibilities.

Oaks continues to receive many awards and honors for his talents as a teacher and as a writer. His 1992 chapbook, The Unknown Country , was selected as the winner of the State Street Press Chapbook Competition. He was awarded a Pennsylvania Council on the Arts Fellowship three times - in 1992, 2000, and 2004 - and in 2000, he won a fellowship from The Pittsburgh Foundation. Twice he has won the Academy of American Poets Prize, and he has also had work nominated for a Pushcart Prize (1999). In honor of his excellence in teaching, Oaks was awarded the Tina and David Bellet Arts and Sciences Teaching Excellence Award in 2008, which "recognizes outstanding and innovative undergraduate teaching in Arts and Sciences." His unpublished poem, "The Things," was selected for publication by the Public Poetry Project of the Pennsylvania Center for the Book in 2013.

Jeff Oaks lives in Pittsburgh where he continues to teach and write.