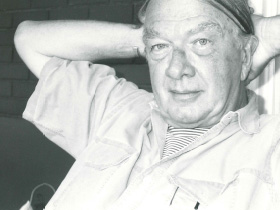 Ed Ochester, a fixture of Pittsburgh letters, has received great acclaim for Land of Cockaigne, Snow White Horses, Cooking in Key West, and other volumes of poetry.

Born in Brooklyn, New York, on September 15, 1939, Ed Ochester spent most of his professional life teaching English at the University of Pittsburgh (Pitt), serving over 20 years as Director of the Graduate Writing Program. A prolific and skilled writer, Ochester has published several volumes of poetry and has served as editor for many publications. Among his critically acclaimed works are The Land of Cockaigne (2001) and Changing the Name to Ochester (1988), an autobiographical work that reflects on his ethnic upbringing. Ochester has won the Devins Award for Poetry, a Pushcart Prize, and Pittsburgh Cultural Trust's 10th Annual Creative Achievement Award. Other of his books include Unreconstructed: Poems Selected and New (2007) and The Republic of Lies (2007).

Ed Ochester was born on September 15, 1939, in Brooklyn, New York to Viola Ochester and Edwin Otto, an insurance broker. In 1961, Ochester received his BA from Cornell University in Ithaca, NY. He then earned his MA in 1963 from Harvard University. On June 16, 1965, Ochester married Clarina Britton and together they had two children, Edwin Hall and Elizabeth Britton. Ochester's next university experience was at the University of Wisconsin-Madison where he remained until 1967, earning his MFA. Upon completing his MFA, Ochester's first poetry compilation, We Like It Here (1967), was published. Two fellow writers who influenced Ochester were Robert Bly, a fellow Harvard graduate, and Mark Strand. Bly is a controversial artist known for his poetry and storytelling; and Strand is a Pulitzer Prize winning poet.

While living and working in Pittsburgh, Ochester served as the Editor of the Pitt Poetry Series and The Drue Heinz Literature Prize for short fiction. Ochester was also Coeditor of The Pittsburgh Book of Contemporary American Poetry and 5AM (a poetry magazine which he also Co-founded); each of these publications was developed by The University of Pittsburgh Press.

Noted for being humorous, compassionate, and true to the human condition, Ochester's work has been published in a number of magazines and journals—Chiron Review, Georgia Review, Mother Jones, The Nation, Pearl, Ploughshares, Poetry, Prairie Schooner, The Southern Review, and Virginia Quarterly Review—and featured in several anthologies of contemporary poetry. For his poetry, Ochester has received fellowships from both the National Endowment for the Arts and the Pennsylvania Council on the Arts. In 1973, Ochester won the Devins Award for Poetry for Dancing on the Edges of Knives (1973); in 1993 he was given a Pushcart Prize for his poem "Oh, By the Way"; and in 2001 he received the Pittsburgh Cultural Trust's $15,000 Creative Achievement Award for an outstanding established artist.

Ochester's newest poems have appeared or are forthcoming in American Poetry Review, Barrow Street, AGNI, Boulevard, Nerve Cowboy, Great River Review, and others. He has had poems selected for Pushcart Prizes and for Best American Poetry 2007 and 2013.

Ed Ochester has written more than 14 books of poetry. In his 1988 collection of poems, Changing the Name to Ochester, Ochester explored his ethnic heritage and Brooklyn working-class upbringing. In 2001's The Land of Cockaigne, he rediscovered the magic of childhood friendships and camaraderie.

His poem "What the Frost Casts Up," from The Land of Cockaigne, was selected for publication by the Public Poetry Project of the Pennsylvania Center for the Book in 2004.

In 2005, Ochester was the only writer in the top ten of the "Top 50 Creative Forces in Pittsburgh," as listed by the Pittsburgh Post-Gazette. For his contributions to the arts, he received the George Garrett Award from the Association of Writers & Writing Programs in 2006. His most recent books include Unreconstructed: Poems Selected and New (2007), The Republic of Lies (2007), and American Poetry Now (2007).

In 1998, Ochester resigned as director of Pitt's Graduate Writing Program to read, write, and do visiting professorships at other universities. After a brief stint as Jemison Professor at The University of Alabama at Birmingham in 1994, Ochester took a position teaching in the MFA program at Bennington College in Vermont. He continues to be a member of the core faculty of the Bennington MFA Writing Seminars, Professor Emeritus at the University of Pittsburgh, and he has been named a distinguished alumnus of the Department of English at the University of Wisconsin. He has served as Editor of the Pitt Poetry Series since 1978 and sponsors the annual Edwin Ochester Award in memory of his father, which awards $350 to a graduate student for the best poem or group of poems as determined by a nationally known poet.

When not away working as a Visiting Professor, Ochester can be found at his permanent home in Pennsylvania, where he pursues decidedly non-academic interests. As he once said, "Since 1972 my wife and I have lived on a small farm in Armstrong County, Pennsylvania, where we raise most of our own food organically and have attempted to return as rapidly as possible to a closer, more satisfying relationship with the earth."