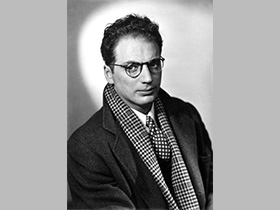 Born in Philadelphia, playwright Clifford Odets is best known for Waiting for Lefty (1935), a play about labor relations.

Clifford Odets was born in 1906 to a prosperous Jewish family who moved from Philadelphia, Pennsylvania, to the Bronx, New York, early in his life. His most famous politically activist plays, Waiting for Lefty and Awake and Sing!, were published and produced during his time in New York. Odets was met with high critical acclaim in his early career and emerged as a leader in American political theater. After a stint in Hollywood writing screenplays, Odets returned to theater. His most popular play, Golden Boy, was published after this return. Odets's career in theater ended in the mid-1950s, and Odets died less than a decade later.

Clifford Odets was born in Philadelphia, Pennsylvania, in 1906 to Louis and Pearl Odets. Odets' works reference his working class roots extensively. His family moved to the Bronx early in his life, where his father's business continued to prosper through the Depression.

According to GarrisonKeillor's The Writer's Almanac, "Odets left school at the age of 15 to go into radio and found work as an announcer, actor, and writer." Not long after Black Tuesday and the dawn of the Great Depression, Odets became a founding member of the Group Theatre in New York, a troupe that sought to change society through theater. It was during this time that Odets also joined the Communist party for a brief time, a period that greatly influenced the plays he wrote early in his career.

Although Odets' tenure in the Group Theatre brought him little acclaim as an actor, it led to his high-acclaimed career as a playwright for his early works. His first play, 9-10 Eden Street, was never produced. His next, Awake and Sing!, was better received by the troupe, but they could not risk producing a play by an unknown writer. Finally, in 1935, the theater produced Odets' best-known work, Waiting for Lefty. It won a contest for new plays in New York and was soon being played once a week. This brief exposure was enough, and soon Odets and Waiting for Lefty were the most talked about author and play of the decade.

Waiting for Lefty is based on the events of a cab strike in New York City in 1934. The play is minimalist, set on a nearly bare stage, but the effect is striking. As the union members await their leader, Lefty, to begin the strike, flashbacks reveal the hardships the Great Depression brought on in each of their lives. At the end of the play, the workers are stripped of their leader, who has reportedly been shot and killed. A radical in the group incites the men to riot and the lights fade down on chants of "Strike! Strike! Strike!" This play came at a time when the plight of the working class in America was desperate, and calls for a shift in power toward the working class were increasingly common. The play was very much applicable to its time period, and was a reflection and commentary on it.

After the intense critical acclaim Odets received for Waiting for Lefty, the Group Theater decided to produce Awake and Sing! Many critics believe it is his finest work, eclipsing Waiting for Lefty. Awake and Sing! depicts a Jewish family broken by economic hardship. It was here that Odets' work truly showed his Jewish roots, and the success of this play firmly established him as a forceful political voice during the Great Depression. His third play, Till the Day I Die, was also reasonably well received, but his fourth was widely criticized. After this failure, Odets decided to take an offer he received from Hollywood.

The second phase of his career was mostly film-making, but it was a lackluster effort. His movies received lukewarm praise at best. He was also criticized for "selling out," but he defended the move by explaining that he could better support the Group Theater with a higher paying job. Whatever his reasons, his tenure in Hollywood provided him with a much larger audience for his later works.

After a number of failed movies, Odets returned to his roots as a playwright. His later works, however, lack the biting social and political commentary of his earlier works. They are instead introspective, semi-autobiographical pieces. He returned to theater with Golden Boy, a play that details the inner struggle of a young Italian boy as he faces a choice between a career in music and a career in fighting. This is arguably Odets' most popular play, and it has been widely produced since its publication. In this play, Odets turns from social commentary to the psychological themes of internal struggle, family obligations, success, choice, and personal values. Rocket to the Moon, published in 1939, was also met with praise.

Next, he published Night Music (1940), The Big Knife (1949), and The Country Girl (1950), the last of which was made into an Academy Award-winning film in 1954 starring Grace Kelly, William Holden, and Bing Crosby. All of these plays were met with genuine praise, but each failed to earn the phenomenal critical acclaim of his early career. His last play, The Flowering Peach, was published in 1954 and marked the end of his career as a playwright. In this play, Odets grapples with the themes of a crisis of ideology, a loss of belief, and the acceptance of injustice in the world.

Odets wrote several more screenplays before his death in August 1963 in Los Angeles, California, but his true success lies with his plays. His plays are still produced today, and Odets stands out as a crucial figure in American political theater. His early works addressed the issues of the time and spoke to the concern of many Americans, while his later works focused on internal struggles and ideology. Regardless of their plots, Odets' bold dialogue, crisp plot lines, and fundamental truths remain, and his genius as a writer and political activist have not diminished with time.