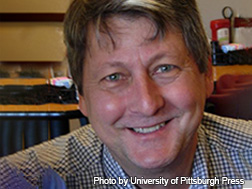 Peter Oresick was a poet, painter, former Chatham University faculty member and Low-Residency MFA Program Coordinator, and former Marketing Director for the University of Pittsburgh (Pitt) Press. He published six poetry books, including what he referred to as "a serial portrait of Andy Warhol" titled Warhol-o-rama (2008) and his 2015 collection, Iconoscope: New and Selected Poems. Oresick edited several poetry anthologies and collections and was the recipient of a Pennsylvania Council on the Arts Fellowship in Poetry (1984) and a Heinz Endowments Fellowship (2005). On September 3, 2016, Peter Oresick passed away in Pittsburgh at the age of 60.

Peter Oresick was born in Ford City in 1955. "I grew up in a small Ukrainian immigrant colony in a factory town on the banks of the Allegheny River," he told Sherrie Fink of The Best American Poetry. Oresick's father was a glass factory worker, and Oresick credited his mother for providing him the motivation to explore the life of Andy Warhol — an interest that later developed into his 2008 biography-in-poems titled Warhol-o-rama and aptly dedicated to his mother. "...[S]he claimed [Warhol] as a distant cousin to us on her mother's side of the family tree," Oresick stated in the afterward of the book. He went on to explain that he later disproved this claim while visiting his and Warhol's ancestral villages in Russia: "same surname, but no relation."

While still a teen, Oresick's father also piqued his literary interests by revealing he had a friend, Frank Brookhouse, who was a novelist, according to the Pittsburgh Post-Gazette's Brian O'Neill. "[Oresick] immediately went to the library and checked out Request for Sherwood Anderson, a short-story collection by Frank Brookhouser... Seeing surnames he recognized, young [Oresick] began thinking of fiction as a career. An interview for his high school paper with Anthony Burgess, author of A Clockwork Orange, clinched that."

Oresick graduated from Ford City High in 1973 and began working at the Pittsburgh Glass Plate Company (PPG) in his hometown and in other Pennsylvania (PA) cities. "I worked my way through college by working at PPG," Oresick told Jonathan Weaver of The Kittanning Paper.

He also began teaching English in city schools, where he found himself presenting "mostly regional stuff," he mentioned in a phone conference with PA Center for the Book staff — a seed that informed his later project, The Pittsburgh Novel, which highlights fiction connected to Western PA. In 1977, Oresick earned his BA and went on to earn his MFA in Poetry in 1981, both from the University of Pittsburgh (Pitt). From there he was hired by the Pitt Press as a Marketing Director and continued in the publishing trade for 22 years. He also taught as a Poet-in-the-Schools and at several colleges and universities, including Pitt, Emerson College in Boston, and the Tepper School of Business at Carnegie Mellon.

While working for the Pitt Press, Oresick was often tasked with finding more Western PA books, similar to Thomas Bell's Out of This Furnace and From These Hills, From These Valleys: Selected Fiction about Western Pennsylvania (edited by Carnegie Mellon Professor Dave Demerest), according to his son Jake Oresick. This prompted Oresick to begin keeping a list of Western PA novels.

In 2005, Oresick joined the faculty at Chatham University, where he taught classes in poetry, fiction, working-class literature, Russian and East European studies, and the printing and publishing industries, and also coordinated the Low-Residency MFA Program in Creative Writing. He noticed a focus on setting taking shape in the MFA program there as well, he told PA Center for the Book staff in conversation, particularly in local geographical and ecological settings. So in 2008 he began collaborating with Demerest on The Pittsburgh Novel project to fulfill his tenure track requirements. Together they catalogued hundreds of titles for the project, according to Jake Oresick, until 2011 when Demerest passed away.

Soon after, Oresick relinquished his pursuit of tenure due to health issues and retired from Chatham University in 2012, yet continued The Pittsburgh Novel project — a project that spans 1792-2014 and is a bibliographical inventory of over 2,000 fictional works, including long-lost novels, short stories, plays, and screenplays, which he hosted on a private blog and planned to publish in book form.

Oresick wrote or edited several poetry books and was the recipient of a Pennsylvania Council on the Arts Fellowship in Poetry (1984) and a Heinz Endowments Fellowship (2005). His first poetry book, The Story of Glass, was published in 1977 and is centered on his hometown. He went on to write six additional collections - including Other Lives: Poems (1985), An American Peace (1985), and Definitions (1990) - and to edit many others, such as For a Living: The Poetry of Work (1995) (co-edited by Nicholas Coles) and Working Classics: Poems on Industrial Life (1990) (also co-edited by Nicholas Coles), which received accolades from The New York Times, National Public Radio (NPR), and the Village Voice, according to Abby Mendelson of Pop City.

Bill O'Driscoll of the Pittsburgh City Paper says Oresick's Warhol-o-rama is "a tour-de-force of slyly constructed and fully inhabited postures and poses, assemblages and ephemera, capturing Our Andy with all the revealing superficiality of a faux-candid Polaroid snapped at a Chelsea cocktail party." On his interest in writing about the artist, Oresick said he was fascinated by Warhol's global fame, "which is off the charts," Oresick told Mendelson. "[R]ationally he should not be popular. But the whole of Warhol is greater than the sum of its parts."

Referring to his collection as "a serial portrait of Andy Warhol; a concept album," Oresick said, "It's not Poetry with a capital P. "It's Warholian in that way. It's light."

On his own writing, Oresick told Weaver that "[i]t's a habit — there's no other way to put it. It's like something you do regularly once you're committed to the craft. I'm also a painter too, and actually, I probably paint more than I write. It's just a matter of doing things you love. Art is a practice for me."

Oresick's poem "Autumn Evening at the Window with Brushes," from Iconoscope New and Selected Poems, was selected for publication by the Public Poetry Project of the Pennsylvania Center for the Book in 2016.

On September 3, 2016, Peter Oresick passed away in the Highland Park area of Pittsburgh at the age of 60. He is survived by his wife Stephanie Flom, the Executive Director of Pittsburgh Arts & Lectures, and their three sons: William, a Chief Medical Dosimetrist in Greater Philadelphia; Jake a writer and law clerk at the Washington County Courthouse; and David, the Executive Director of the Silver Eye Center for Photography in Pittsburgh.