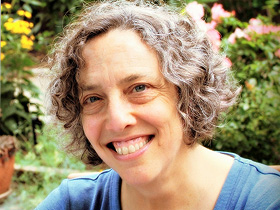 Poet Jacqueline Osherow was born and raised in Philadelphia.

Born and raised in Philadelphia, Pennsylvania, Jacqueline Osherow aspired to be a poet. Her first collection, Looking for Angels in New York, was published in 1988, and she has produced multiple collections since, including Conversations with Survivors (1994), Whitethorn (2011), and Ultimatum from Paradise (2014). In 2012, she was a featured poet in the Public Poetry Project of the Pennsylvania Center for the Book. She has won various awards and has been featured in journals such as The New Yorker. At the time of this writing, Osherow is a Distinguished Professor in English at the University of Utah.

After growing up in Philadelphia, Pennsylvania, Jacqueline Osherow focused on her studies and her love of poetry. She earned her BA from Radcliffe College-Harvard University in 1978 before marrying Saul Korewa in 1985. Together they moved to New Jersey where her first daughter, Magda, was born. Thereafter, they moved to Salt Lake City, Utah, where her two daughters Dora and Mollie were born.

Her first collection of poetry, Looking for Angels in New York, was published in 1988 and later chosen for the Barnes & Noble Contemporary Poetry Series. She continued her education at Princeton University and graduated in 1990 with her PhD. That same year, Osherow won the Witter Bynner Prize from the American Academy and Institute of Arts and Letters. Her work has been applauded for its inclusion of double sestinas and focusing on such topics as faith, history, Jewish traditions, and biblical inconsistencies.

Conversations with Survivors, her second collection, was published in 1994 and two years later, she produced a third called With a Moon in Transit. "Breezeway, Circa 1964" is a poem from her third collection that depicts an everlasting summer night in the city of Philadelphia and was selected for publication by the Public Poetry Project of the Pennsylvania Center for the Book in 2012.

After a divorce in 2001, Osherow was awarded the Faculty Fellow Award from the University of Utah in 2002 and the Elizabeth Matchett Stover Memorial Award in 2010. Her latest collection of poetry is Whitethorn: Poems, published in 2011.

During her career, she has been presented with several awards from the Poetry Society of America, featured in professional journals such as The New Yorker and Paris Review, and been granted several fellowships, including from the National Endowment for the Arts and the Ingram Merrill Foundation. Her work has been anthologized in Jewish American Literature: A Norton Anthology (2000), The Penguin Book of the Sonnet (2001), Twentieth Century American Poetry (2003), The Wadsworth Anthology of Poetry (2005), and twice in Best American Poetry (1995 & 1998).

Currently, Jacqueline Osherow presents her work across the country, serves on various academic committees, and is a Distinguished Professor of English at the University of Utah, where she teaches classes and directs the Creative Writing Program.