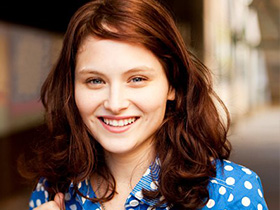 Author Alice Ozma is the author of the best-selling book The Reading Promise: My Father and the Books We Shared and lives in Philadelphia.

Alice Ozma, born and raised in Millersville, New Jersey, wrote her bestselling book, The Reading Promise: My Father and the Books We Shared, in her early twenties. The young author quickly earned many accolades for her bestselling memoir, which chronicles her and her father's daily reading ritual, affectionately referred to as the "streak" and spanning nearly nine years. Ozma recently graduated from Rowan University in Glassboro, New Jersey, and now splits her time between working for Scholastic and venturing across the country to give presentations on the importance of reading. She currently resides in Philadelphia, Pennsylvania.

Kristen Alice Ozma Brozina (better known as Alice Ozma) first developed literary roots at birth, when her parents legally named her after characters from famous works of literature. Her father picked Alice from Louis Carroll's famous book Alice in Wonderland, and Ozma derives from L. Frank Baum's Ozma of Oz, the third book in the Wizard of Oz series. She was born and raised in Millersville, New Jersey.

Her father, Jim Brozina, a former elementary school librarian, also nurtured Ozma's love of books, reading aloud to her before bedtime. This nighttime routine led the dynamic pair to make a promise to each other in 1997, agreeing to read aloud for 100 consecutive nights, which later turned into 1,000 nights. The "streak," as they lovingly came to call it, ultimately extended until Ozma left for college, spanning nine years and exactly 3,218 nights. The "streak" encompassed a variety of works picked by Brozina and Ozma, including James and the Giant Peach, the Harry Potter series, Charles Dickens's Great Expectations, and Shakespeare's plays.

In The Reading Promise: My Father and the Books We Shared, Ozma recounts the story of her and her father's commitment to the "streak," narrowing in on particular books and the associated memories and lessons learned. The book's vignette-like style also emphasizes the pressures and embarrassment that the "streak" at times imposed on the duo. Her book reveals how their commitment and love for each other, as well as the daily reading routine, persisted through times of trial for the family, including when Ozma's mother left and when her older sister moved to college. Ozma's father describes their nightly reading time as a source of stability during their "rough patches" and "scary" financial situation.

The pair dependably read from the time Ozma began fourth grade until she left for college, encountering a myriad of embarrassing moments and challenging obstacles along the way. "I think the root of embarrassment is feeling totally misunderstood, wanting to explain yourself over and over but knowing that you won't much sense to anyone even if you do. The Streak always posed that sort of problem," Ozma wrote in her memoir, trying to come to terms with the difficulties, discomfort, and spectacle-like atmosphere that the streak often posed for her father and herself as she came of age. This particularly applies to a certain incident she devotes a chapter to in her bestselling memoir; the chapter centers on how Ozma's theatre rehearsal was nearing midnight, and her father publicly requested that she be excused because he "needed to read to her by midnight." Despite the handful of awkward moments—such as her father censoring certain scenes from books, like a chapter detailing a young protagonist's menstruation—Ozma says one of the most difficult moments was leaving for college, marking the end of the streak. "The night that our streak ended is the most memorable" night that stands out in their many, many years of reading together. "When you've worked on something that long, it's hard to stop. That chapter was the most difficult to write," Ozma said.The father-daughter pair appropriately chose to start and end their streak with the same book: The Wizard of Oz.

Ozma's debut book has been met with much praise, including being deemed a bestseller for The Los Angeles Times, Barnes and Noble, and Amazon Booksellers' Association. Additionally, several prominent publications and television programs, ranging from The Today Show to The Washington Post, featured it.

In an interview, Ozma remarked that she does not foresee herself recreating the same "streak" with her own children, stating that "it's too much pressure." After reading countless books, Ozma claims she does not have a favorite: "The honest answer is no. I've read so many, both with my father and of my own choosing, that somehow it seems wrong." While technology is evolving, Ozma does not believe that the same experience can be genuinely recreated via the iPad or other eBook device, yet agrees that something is better than nothing. "Anything that gets a family reading is good in my eyes," she argues. She encourages other families to make a reading promise to each other and to start their own streak. She provides resources and information on her website.

Ozma recently graduated from Rowan University in Glassboro, New Jersey, and she currently divides her time between traveling across the country presenting about the importance of reading and working at Scholastic. She resides in Philadelphia, Pennsylvania.

The Reading Promise: My Father and the Books We Shared. New York: Grand Central Publishing, 2011.