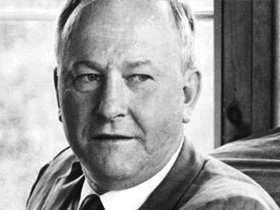 Journalist and social critic Vance Packard, author of such bestsellers as The Sexual Wilderness(1968) and A Nation of Strangers (1972), was born in Granville Summit in 1914.

Vance Packard, an admired journalist turned novelist, was born in Granville, Pennsylvania, in 1914. He attended the Pennsylvania State University and moved on to earn his masters degree from Columbia University's Graduate School of Journalism. His controversial and acclaimed novels focused on social patterns and human behavior. He died on Martha's Vineyard in 1996.

Vance Packard was born in Granville, Pennsylvania, on May 22, 1914. His parents were Philip Joseph Packard, a farm supervisor for the Pennsylvania State University, and Mable Case Packard. On November 25, 1938, he married Mamie Virginia Mathews, an artist, with whom he had three children: Vance Philip, Randall Mathews, and Cynthia Ann.

Packard was raised in State College, Pennsylvania, along with his two siblings. Upon graduating from high school in 1932, Packard attended Penn State, majoring in English. He graduated college in 1936and became a cub reporter for the Centre Daily Times in State College. While working as a reporter, he received a scholarship to attend Columbia University's Graduate School of Journalism. He earned his masters degree in 1937. Following his graduation, Packard was hired as a columnist for the Boston Record. He remained at this position for a year, and then became a feature writer and editor for the Associated Press news service. In 1942, Packard stepped down from his position with the Associated Press and joined American Magazine. He remained on staff until 1956, when the magazine ceased publication. While writing for magazine, Packard was also working on publishing novels. His first book, co-written with Clifford Rose Adams, How to Pick a Mate: the Guide to a Happy Marriage, was published in 1946 and again in 1947 under a different title. Packard continued to write novels, which successfully challenged the social awareness of his readers while providing an important commentary on social situations. He also lectured on reporting methods and magazine writing at Columbia University, New York University, and other institutions of higher learning.

Packard received the most praise for his best-selling novel, The Hidden Persuaders, published in 1957. The novel was part of a series of books Packard wrote in the late 1950s. Readers and critics quickly associated the eight books as playing an important role in the awakening of consumer awareness among Americans. He was once described in Publishers Weekly as "our most popular popularizer of sociology." Packard said most of his understanding and material he used to write his series of novels was gathered during his days as a writer for the Associated Press Feature Service. He said most of the inspiration to write The Hidden Persuaders came while working on another project. Packard became interested in the methods utilized by advertising agencies to sell products. He was so intrigued by the different tactics advertisers and public relations representatives used to communicate to the consumers the importance of buying products. In his book, The Hidden Persuaders, Packard uncovered and investigated the advertising industry's reliance on the use of socio-psychological and motivational research, and subliminal projection to reach the consumer. He was particularly concerned with the steps taken by the industry to utilize the subconscious mind to subliminally motivate members of society to purchase products. In his earlier books, Packard warned the public against "impulse buying" and urged consumers to be weary of such improper practices. He wanted consumers to understand the techniques being used to sell them products, and asked that they demand fair advertising. The advertising industry lashed out at Packard after his findings were published. Members of the industry publicly denounced Packard's challenges to the advertising technique he called "motivational research." Advertisers wanted to make it clear to wary consumers that this type of research helped the industry to better serve the consumer community. Industry leaders still deny the claims made by Packard, and denounce his findings as untruthful and biased. The later novels in Packard's successful series, deal with different areas such as a sneak peek into what goes on backstage at a big business in The Pyramid Climbers (1962). In The Naked Society (1964), he investigates the intrusions made by institutions like the government, schools, and businesses into the private life of the American citizen. Packard continued to write novels that examined social patterns and human behavior, publishing novels throughout the 1980s.

Packard received much praise and acknowledgement for his writings throughout his career. In the early 1960s, Packard was presented with two Distinguished Alumni Awards from both of his alma maters, the Pennsylvania State University and the Columbia University Graduate School of Journalism. His novel, The People Shapers (1977), was named one of the most notable books of 1977 by the American Library Association. While Packard was widely criticized by industry leaders for his analysis of big business tactics and advertising methods, he was also highly regarded in the eyes of many well-respected scholars. He was highly praised for the diligence and precision that flowed from his intensely honest investigations into controversial social situations. Warren Bennis, the former president of the University of Cincinnati, summed up why Vance Packard is admired by so many people, saying, "There is no denying that Vance Packard has got his finger on one helluva issue--maybe the issue facing us in the last quarter of this century...But the important thing is that Packard's there...and then proceeds to face, rather than dodge."