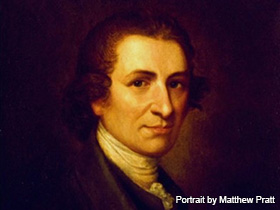 America's most famous pamphleteer, Thomas Paine is best known for his Common Sense (1776).

Thomas Paine, one of America's Founding Fathers, was born in England in 1737. In America, he held one of the more reviled offices in the colonial government: excise (tax) officer. He became a great patriot and an inspirational, if not incendiary, writer, particularly with the pamphlet Common Sense (1776) and the essays in The American Crisis (1776 - 1783). His reputation amongst the Revolutionary generation was ruined after his highly critical public letter to George Washington. In 1809, Paine died in New York, New York.

Thomas Paine was born on January 29, 1737, in the small village of Thetford in Norfolk, England, to Joseph Pain and Frances Cocke Pain (Paine added the e to his name later). In 1759, he married Mary Lambert; she and their child died in less than a year later in childbirth. Paine then married Elizabeth Ollive in 1771. In 1774, Paine and his wife signed a formal separation agreement. Paine never remarried nor did he have any children.

Paine attended a mere seven years of formal education at the Thetford Grammar School. After that, he took his education on himself, reading anything he could and accepting informal instruction from various scholars into his early twenties. In 1780, Paine received an honorary master of arts from the University of Pennsylvania. The first piece of writing that can be definitively attributed to Paine was his The Case of the Officers of Excise (1772), which he wrote on behalf of his fellow excise officers in their pursuit of higher wages.

Paine's most significant works revolved around the American Revolution. Paine's Common Sense: Addressed to the Inhabitants of America... (1776)was credited with persuading many influential colonials, such as Thomas Jefferson, to seek independence. Common Sense had a tremendous amount of popular appeal and had a great impact on the masses. Paine's next contribution to the American Revolution was his TheAmerican Crisis (1776 - 1783). The first Crisis paper was published in mid-December 1776, one of the bleakest periods of the American Revolution. During this time, Paine was serving in the army under General George Washington. General Washington was so moved by Paine's work that he ordered it read to his troops before his famous attack on Trenton, which is considered by many to be a turning point in the war. Following the American Revolution, Paine moved to France in 1787. There he continued his political work, writing Rights of Man (1791), which sold two million copies in France within months of its appearance—adding intensity to the French Revolution. Several of Paine's publications were offensive to the American populous. In 1794 and 1795, Paine published the two parts of The Age of Reason: Being an Investigation of True and Fabulous Theology. This work was received with great animosity in both England and America. In the work, Paine criticizes the supernatural aspects of Christianity and points out contradictions in the Bible. In 1796, Paine wrote his Letter to George Washington, in which he lashed out at Washington and other renowned political figures. Paine's reputation and popularity in the United States never recovered following its publication.

Paine never won literary awards or recognition for his many works. Instead, Paine is remembered as a historical political activist of great significance. Some doubt if the American Revolution would have occurred at all without Thomas Paine's influential and revolutionary pen. When he resided in America, Paine lived in Philadelphia, Pennsylvania, which was the heart of the revolution.

Paine died in New York City on June 8, 1809. He was buried on his farm at New Rochelle, New York. Paine's bones were disinterred in 1819, so his remains could be buried with honor in England, his native land. The project of reburying Paine with a suitable monument never materialized, and his remains were lost.