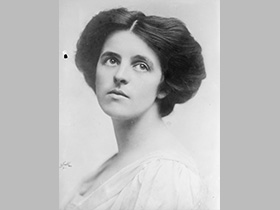 Although made famous by her Round Table activities at the Algonquin Hotel in New York City, Parker also wrote many volumes of short stories and poetry, including Death and Taxes.

A writer born in West End, New Jersey, Dorothy Parker is known for her outspoken literary work and recognized for her accomplishments in New York. Parker spent the majority of her time in New York publishing many books and poetry, yet still made time to make her success nationwide. While married to her first husband Edward Pond Parker II, Parker spent time in their Pennsylvania estate in Bucks County. Later she traveled back to New York, the area with which she is most associated.

Dorothy Parker was born in West End, New Jersey, on August 22, 1893. Parker was born prematurely to Eliza Marston, of English ancestry, and Jacob Rothschild, a Prussian Jew. Parker learned many languages, including French and Italian, thereafter enhancing an appreciation of literature and poetry. Though intellectually accomplished, she was not proud of the fact that she did not graduate high school. Parker started her life as a dance instructor at the age of 16 in New York. When she realized that this career was not going to take her very far, she submitted a writing sample to a magazine company known as Crowninsheild's Vanity Fair and took a job as a general editorial assistant. As time went on, and men were taking her place in the literary world, Parker began to speak very freely through her writings, and the public did not agree with what she was saying. Parker was soon fired and then rehired by Frank Crowninsheild because he valued her work. In June 1916 she was married to Edward Pond Parker II; after he was enlisted in World War I she knew he would not come back the same man. While he was away, Parker traveled to Europe and bought several mansions. Parker later divorced in 1928, and then remarried in the mid-1930s to Alan Campbell, whom she divorced and remarried several years later. Campbell and Parker bought a summer estate in Pipersville, Bucks County, where in 1934 she began to receive contracts to write small plays for Paramount Pictures in Hollywood.

Seemingly dissatisfied with her life, Parker turned to drinking and attempted to commit suicide several times. Yet this difficult life added fire to her wit and has made her writing more memorable.

Today, Dorothy Parker is remembered for many of her literary works in the early 1900s, such as: Such a Pretty Little Picture, Close Harmony, and Enough Rope. Parker is mainly recognized for being blunt in her writings, which ultimately made her work a success. When Parker began, she gave her first piece to Vogue magazine. There, she learned how creative and outspoken she really was as a writer. As Parker continued her journey as a writer, she wrote many short stories, dramatic plays for Hollywood, and poetry. Many people enjoy her work to this day. She did not feel she had to present herself as a "woman writer," only as a writer. For instance, her short poem "Drab Heroine" illustrates how women were supposed to be represented during that era: "...abandon hope and learn to cook." During that time women were seen only as the cooks, care givers, and housewives, whereas Parker believed that women were sexual beings who had to suppress their desires because that is what men expected of them. As time went on, Parker's work became global. Not only did Parker write in New York City, she wrote all over the world. Some of her books were based on the experience of her ex-husband Edward Pond Parker II.

Many people still admire Parker's work and recognize her literary contributions. The Dorothy Parker Society of New York celebrated Parkerfest 2000 in Manhattan, during the month of August. Parker wrote over 300 poems and verses for various magazines and newspapers. Parker's first book, The Lady in Back, was published in November 1916. In June 1919, 35 of Parker's friends gathered for lunch at a New York establishment to discuss what they considered literary work to be. A few months later, they declared this luncheon to be the literary circle at the Algonquin Hotel and began the famous Algonquin Round Table. Later, in 1925, she submitted drama reviews to the New Yorker.

Parker died in 1967 of a heart attack. Parker is buried in New York City. Parker may be deceased, but she will always be remembered for her outspoken wit.