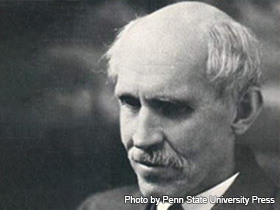 Fred Lewis Pattee was born in Bristol, New Hampshire, on March 22, 1863. Pattee studied English at Dartmouth College and graduated in 1888. In 1894, Pattee accepted a position as an Assistant Professor and Head of the Department of English at Pennsylvania State College (now the Pennsylvania State University), then earned a promotion to Full Professor in 1895. Pattee is regarded as the first "Professor of American Literature," having published the groundbreaking works "Is There an American Literature?" in 1896 and A History of American Literature Since 1870 in 1915. Pattee left Penn State for Rollins College in Winter Park, Florida, in 1928, and died there on May 6, 1950.

Fred Lewis Pattee was born on his grandfather's farm near Bristol, New Hampshire, on March 22, 1863. Pattee was the son of farmer Lewis Franklin Pattee and Mary Philbrick Ingalls. During his youth, Pattee studied at public schools in Bristol and South Alexandria, then went on to work as a printer's assistant in Bristol until 1882. From 1882 to 1883, Pattee studied at New Hampton Institution outside Bristol, then worked as a printer and a waiter in Rhode Island until he enrolled at Dartmouth College in 1884. While at Dartmouth, he worked as a part-time teacher to help pay the cost of his degree and served as editor of the Dartmouth Literary Monthly during his senior year. Pattee graduated from Dartmouth College in 1888.

Though Pattee desired to become a journalist, his financial situation demanded that he find work teaching. For a short time in 1888, Pattee held a position at a grammar school in Eatontown, New Jersey, though poor health prevented him from teaching for an extended time at the school. In 1889, he married Anna Lura Plumer, with whom he had his only child, Sarah Lewis Pattee, born in 1895. Pattee worked intermittently as a reporter, high school principal, and academy principal from 1889 to 1894, and published some of his earliest works at this time. Pattee's The Wine of May, and Other Lyrics was printed in 1893. In 1894, Pattee filled in for the sole member and department head of the English Department at the Pennsylvania State College (now the Pennsylvania State University) as an Assistant Professor, and later earned a promotion to Full Professor in 1895.

Pattee's publications at this time included the 1896 article "Is There an American Literature?" that appeared in the Chicago journal Dial, as well as textbooks and historical works aimed to improve education in American literature. Specifically, Pattee aimed to establish American literature as a field worthy of study in its own right, not just as a subset of the well-established British literature. He published his best-known work, A History of American Literature Since 1870, in 1915. In its Preface, Pattee argued:

We have divided the literary history of the [nineteenth] century into three periods, denominating them as the Knickerbocker Period, the New England Period, and the National Period, and we have made the last to begin shortly after the close of the Civil War with those new forces and new ideas that grew out of that mighty struggle. [...] It was not until after the war that our writers ceased to imitate and looked to their own land for material and inspiration. The amount of its literary product has been amazing. There have been single years in which have been turned out more volumes than were produced during all of the Knickerbocker Period. [...] One can say of the period what one may not say of the earlier periods, that the great mass of its writings could have been produced nowhere else but in the United States. They are redolent of the new spirit of America: they are American literature.

Though Pattee aroused controversy and criticism by advocating a dedicated study of an American literature, his impact on literary history and on American culture is unmistakable. Even in his early years of teaching at Coe's Northwood Academy in Northwood Centre, New Hampshire, he was one of only fourteen college professors in the country to teach American literature in the year 1895. As Penn State Associate Professor and writer Julia Kasdorf states in her 2012 introduction of Pattee's reprinted The House of the Black Ring: "Pattee always insisted on the necessity of studying American literature as a field distinct from English literature, and on the importance of considering literature in relation to culture and geography."

Pattee's energetic life was full of other pursuits, as well. In 1897, he toured England and Scotland by bicycle, then published a work on the foundations of English literature. In April 1901, he wrote lyrics for a Penn State song and published them as a suggestion. It was first sung at an Alumni Dinner in June 1901, where the President of Penn State's Board of Trustees, Governor Beaver, hailed it as Penn State's official song. With President Atherton's agreement, a four-verse version of Pattee's song, which was originally six verses, is now the official Alma Mater of Penn State. Pattee also edited three volumes of Philip Freneau's poetry, a forerunner of the Transcendentalist movement and one of his own favorite writers, in 1902, 1903, and 1907, and published three novels in 1902, 1905, and 1912.

Between 1905 and 1925, Pattee was recognized as a Methodist preacher and acted as a Methodist Sunday school superintendent and a college chaplain from 1912-1928. In 1928, Pattee prompted his colleague Jay B. Hubbell at Duke University to start the journal American Literature, which still operates under the imprimatur of the Duke University Press. Pattee's autobiography, Penn State Yankee, was published after his death in 1953; in it, Pattee addressed his childhood, his college career at Dartmouth, his time as a Penn State professor, his contributions to the study of American literature, and his late work done while he lived in Florida.

Pattee had always yearned for more success as a fiction writer, struggling through numerous rejections and relentless revision of his work. In a 1908 datebook, he wrote, "I have been refused more times than any other author in America, and I have re-written my work and studied and planned with infinite patience....I doubt if I ever try another novel if 'Old Second Street' does not win. After a man has had five novels killed under him it is time for him to try another vehicle."

The House of the Black Ring had been rejected in various forms fourteen times before it was published in 1905. Kasdorf's introduction describes the origins of the book: "[Pattee] drew on Centre County's landscape and people to create a local color romance 'made of note-book jottings and research' instead of personal memory. He recalled that he 'grubbed steadily for materials,' eavesdropping and 'jotting down dialect' quite different from his own. ... In those days, at the turn of the twentieth center, "at every gathering of faculty people there was always presented a new string of funny 'Dutch localisms.'"

Her description goes on to say that "[T]he book's pleasures also include vivid images of a long-ago landscape and linguistic artifacts carefully collected by a fascinated outsider. Those familiar with the area now commonly called Happy Valley will enjoy seeing how Pattee transforms the local terrain into a mysterious and highly charged setting for his romance."

By the 1920s, Pattee was sought after as a visiting professor. First, he spent the summer of 1905 at his own alma mater, Dartmouth College, but then spent time between 1917 and 1935 at the University of Illinois, the Bread Loaf Summer School, and Columbia University. In 1927, Pattee's wife passed away. The following year, he married Grace Gorrell Garee, retired from Penn State, and moved to Garee's native Florida to begin a professorship at Rollins College in Winter Park and continued to write. While there, Pattee published The New American Literature in 1930 and The First Century of American Literature in 1935. Pattee's second wife passed away in 1946, and Pattee died four years later on May 6, 1950, in Winter Park.

While Pattee wrote and lectured in Florida, his Pennsylvania State College constructed a Public Works Administration-General State Authority project from 1937-1940, the main building of which is now called Pattee Library. Pattee Library held around 800,000 volumes in the mid-1960s, before three additions including its East Wing in 1973. In the Fall of 2000, the renovated Pattee Library and the new adjacent Paterno Library—named for longtime head football coach Joseph V. Paterno—were dedicated; Penn State's University Libraries at 24 locations across Pennsylvania now contain nearly five million items.

"From his college days until his death," Kasdorf reveals, "Pattee continued to read and write poetry for himself most Sunday afternoons, and for sixty-two year he published literary criticism and histories. At the age of forty-eight, however, he concluded his career as a writer of fiction.