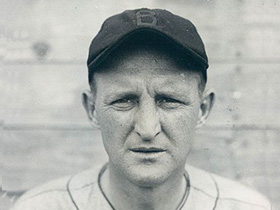 "The Knight of Kennett Square" pitched for the Philadelphia Athletics during his Hall of Fame career.

Herb Pennock was born on February 10, 1894, in Kennett Square, Pennsylvania. He graduated from high school in 1912 and went straight into the Major Leagues. From 1912 to 1915, he pitched for the Philadelphia Athletics (now the Philadelphia Phillies). In 1915, he joined the Boston Red Sox and continued pitching for them until 1922. Finally, in 1923, he took his pitching abilities to the New York Yankees with whom he won three World Series Championships. He played for the Yankees until 1933. In 1934, he was traded back to the Boston Red Sox, which is where his career came to an end. He died on January 30, 1948, in New York, New York.

Herb Pennock was born on February 10, 1894, in Kennett Square, Pennsylvania. The year 1912 was a big year for him after graduating from high school in early May. On May 14, 1912, he started his career in baseball at the age of 18. He got his first glimpse of the Major Leagues that year when he joined Philadelphia Athletics (now the Philadelphia Phillies). Pennock's potential finally came to light in 1914 when he had an 11-4 record during the regular season. During that year's World Series, he pitched for the Athletics in the fourth game of their three game sweep at the hands of the Boston Braves (now the Atlanta Braves). Philadelphia manager Connie Mack decided to sell Pennock to the Boston Red Sox in 1915 due to his poor pitching statistics that year.

Pennock's best career year was 1919, which is when his pitching statistics went through the roof, and he managed to pitch a career record of 200 innings in a season. His statistics stayed at a desirable level for four years until they declined in 1922. Pennock's record in 1922 was 10-17, which was not representative of a "good" player. The Red Sox manager decided to trade Pennock away to the New York Yankees in 1922 due to his horrible pitching record. That trade was the best thing that could have happened to Pennock at that time. His statistics skyrocketed, and he met some career high goals. Yankees manager Joe McCarthy is quoted by the National Baseball Hall of Fame as saying, "I am going to pitch Pennock in spots this season—the tough ones."

In 1924, he managed to get an incredible record of 21-9 games and a 101-batter strike out record. In 1926, Pennock reached his all time high record with a win of 23 games in a season. As Ray Robinson stated in his book, The Greatest Yankees of Them All, "Pennock was the greatest left-handed pitcher of all time." However, the year 1929 was his breaking point. His pitching ability and skills started declining, and his overall performance went down hill. From 1929 until 1933, he never reached more than 189 innings pitched in a season, and his earned run average never dropped below 4.00. Pennock prospered with the Yankees, pitching in a total of three World Series Championships in the years 1923, 1927, and 1932. When the Yankees felt that Pennock was no longer of any worth to the team, he was traded back to the Boston Red Sox in 1934. Pennock gave the Red Sox and the game of baseball his all, but unfortunately could not continue on with his career. He played his final game on August 27, 1934.

Pennock's overall career statistics were 240 wins, 162 losses, an earned run average of 3.60, and 1227 strike outs. When Pennock knew that he physically could not continue baseball, he retired from pitching and became a Red Sox coach. From 1944 to 1948, he continued his love for the game of baseball and went on to be the general manager of the Philadelphia Phillies until he suffered from a cerebral hemorrhage on January 30, 1948, at the age of 53. He was elected into the National Baseball Hall of Fame only a few weeks later. Pennock was also included in the book, The 100 Greatest Baseball Players of All Time, published in 1981 by Lawrence Ritter and Donald Honig.