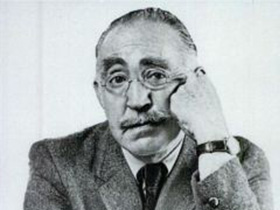 Humorist S.J. Perelman, writer of the Oscar-winning screenplay for Around the World in Eighty Days (1956), lived in Bucks County for a time.

Sydney Joseph (S. J.) Perelman was born in Brooklyn, New York, on February 1, 1904. He was a humorist for the New Yorker and College Humor, and he also worked as a screenplay writer and playwright. Throughout his career, Perelman produced a novel, 560 short prose pieces, eight plays, eleven film scripts, and many television scripts. Perelman began writing in 1925 when he met friend and writer Nathanael West. In 1929, he married Lorraine West, and his Dawn Ginsbergh's Revenge was pulished. Sydney and Lorraine West spent twelve years on a farm in Bucks County, ultimately inspiring one of Perelman's famous pieces, Acres and Pains (1947). Perelman died on October 17, 1979, in New York City.

Sydney Joseph Perelman was born in Brooklyn, New York, on February 1, 1904, but he grew up in Providence, Rhode Island. He was the son of Joseph Perelman, a machinist and dry goods store owner, and Sophia Charren. Perelman attended Classical Senior High School in Providence, where he had an interest in writing. However, he was more intrigued by film and attended movies regularly. Throughout his early adulthood, Perelman strove to be a cartoonist. He practiced and perfected his drawing skills on cardboard boxes in his father's store.

In 1921, Perelman enrolled at Brown University as a pre-medical student, but he quickly switched his major to English. Perelman put his drawing skills to use by joining a college humor paper called Brown Jug. At Brown he also met Nathanael West, a writer and friend who inspired Perelman to begin writing. Perelman continued to work for Brown Jug and soon became the editor. In 1925, leaving Brown without a degree due to his inability to complete trigonometry, Perelman accepted a job as a cartoonist with Judge. Perelman met and married Lorraine West in 1929, and in this same year he had his first humor piece, Dawn Ginsbergh's Revenge, published. Perelman began his first writing job in 1930 at College Humor magazine. It is said that this is the time he came into his own as a comic writer.

Perelman spent many years in Hollywood making movies with the Marx Brothers for Paramount pictures. In 1931, the Marx Brothers movie Monkey Business was released; Perelman wrote the screenplay. He also wrote the screenplay for another Marx Brothers classic, Horse Feathers (1932). Perelman thought poorly of the Hollywood lifestyle and admitted that his sole motivation for working as a screenwriter was the money. Perelman also contributed to the New Yorker. Perelman's collection Strictly From Hunger was his first to be published by Random House in 1937. He matured as a humorist, creating longer pieces with a very sharp sense of language.

In 1943, Perelman wrote the play One Touch of Venus. The story consisted of a barber who falls in love after a statue of Venus comes to life. In 1947, Acres and Pains was released. This famous collection was "a by-product of a dozen years of country living," which Perelman was not very fond of. This collection elaborated on common adventures in the country, often times with Perelman as the butt of the joke.

In 1956, Perelman wrote Around the World in Eighty Days, a screenplay based on the novel by Jules Verne. Perelman received the Academy Award for this screenplay, as well as the New York Film Critics Award.

From 1956 to 1970, he continued to write many collections, most of which were still contributed to the New Yorker. In 1970, his wife Laura died. Perelman sold the farm in Bucks County and decided to move to London, stating that he had to "escape insanity and violence, twice breathed air, the current political climate, and every hard hat and redneck in the country. I've had all the rural splendor I can use." After two years abroad, he returned to New York City taking up an apartment in Greenwich Village.

In 1977, Eastward Ha, his last book, was published. The work described his latest travels around the world, creating comedy out of the difference in cultures. The following year, the National Book Association created the Special Achievement Award and made Perelman its inaugural recipient. At the time, New York Times columnist Richard Locke applauded the move, calling Perelman "the Picasso of contemporary American prose." Sydney Joseph Perelman died on October 17, 1979, of natural causes in his New York City apartment.