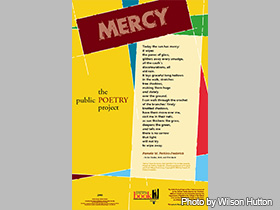 Poet Pamela Perkins-Frederick is the author of There Is No Sorrow Light Won't Try to Wipe Away.

Poet and visual artist Pamela M. Perkins-Frederick grew up on the campus of Hampton University in Virginia. She earned an Associates of Arts degree from Bucks County Community College in 1976 before going on to earn an MFA from Vermont College in 2003. She was published in many journals and anthologies, and in her own volumes: A Leaf Gnawed to Lace (1992) and No Sorrow That Light Won't Try to Wipe Away (2006). She earned several awards, including being named the 1984 Bucks County Poet Laureate. She worked in the Fine Arts Department of Bucks County Community College. She died in 2014.

Pamela Perkins-Frederick was born in Hampton, Virginia, to Sadie Lee Marchant and Herbert Armand Perkins. She spent much of her childhood living on the campus of Hampton Institute (now Hampton University), where her father was a math professor and head of the math department. The family moved to her father's home state of Massachusetts as Perkins-Frederick began her high school career.

After high school, Perkins-Frederick spent two years at the University of Massachusetts before marrying. The couple then returned to Virginia for a time and then moved to Pennsylvania in 1960. Some years later, after a divorce, she attended Bucks County Community College, where she received her Associates of Arts degree in 1976.

She eventually married Herbert Bahler Perkins-Frederick, who taught computer courses at Bucks County Community College as adjunct faculty and who was also a poet and musician, often presenting his works and inventive thoughts alongside her at events. On February 6, 2012, Perkins-Frederick's husband of 35 years passed away peacefully after a battle with cancer.

In 2003, Pamela Perkins-Frederick earned an MFA from Vermont College. She credits fellow poet Chris Bursk with helping her achieve success with her poetry by encouraging her since their meeting in 1975, during the time she earned her associates degree and he taught as a Bucks County Community College professor. Her work was first published in the Beloit Poetry Journal in the fall of 1982, and since that time has been published in The Bucks County Writer, Cactus Fire, and Day for all Women: Coming of Age, among many other journals and anthologies. She has also written a chapbook, A Leaf Gnawed to Lace (1992) and a full-length poetry book, There Is No Sorrow Light Won't Try To Wipe Away (2006).

Her poetry has garnered her several awards, including being named the Bucks County Poet Laureate in 1984, being awarded a fellowship from the Virginia Center for the Creative Arts, and winning the Robert Fraser Award.

The many themes of Perkins-Frederick's poetry include a frequent reference to nature, as seen in the poem, "Mercy." This poem, from No Sorrow that Light Won't Try to Wipe Away, was selected for publication by the Public Poetry Project of the Pennsylvania Center for the Book in 2008.