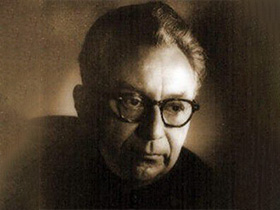 Modern composer Vincent Persichetti was a life-long resident of Philadelphia.

Composer Vincent Persichetti was born in Philadelphia, Pennsylvania, in 1915. From the young age of two years old, Vincent Persichetti was fascinated with learning how to produce music on both the piano and the organ. As Persichetti matured he educated himself in music theory, conducting, and composition at the Combs Conservatory of Music. He pursued his career of music study at the Curtis Institute of Music where he would also meet and court Dorothea Flanagan, a very talented pianist and student at the institute. During the 1950's Persichetti composed some of his most famous sonatas, conciertos, and orchestral pieces. After some forty years associated with the Juilliard School of Music, Persichetti died in 1987.

Vincent Ludwig Persichetti was born on June 6, 1915. As a child, Persichetti was raised in South Philadelphia in an Italian neighborhood. Although Persichetti's parents, Martha Catherine Buch and Vincent Roger Persichetti, were not musicians themselves, they nurtured their son's desire to begin a career in the performance and study of music. As a child of two years, Vincent Persichetti requested to begin taking piano lessons. When Vincent Persichetti was four years old, his family moved to South Broad Street in Philadelphia. An explorer of the world of music, Persichetti soon realized that Mr. Combs, the founder of the Combs Conservatory of Music, only lived six houses down the road. Thus, as a result of their close proximity, the young, ambitious child would constantly visit and question the musical maestro on his knowledge of music. Persichetti began his study of performing, on the piano, at age five, under the instruction of William Stanger. As a musician, Persichetti also became a competent performer with the organ and the tuba. In 1921, at only six years of age, Persichetti made his first appearance in a piano recital. As a result of his success and mastery of the musical craft, Persichetti was granted admission into the Combs Conservatory of Music. At this music-focused learning institute, Persichetti immersed himself in the study of music theory taught by Russell King Miller. The knowledge that Miller imparted on Persichetti was vital for his first radio performance on the piano in 1925.

In 1935, at age 20, Persichetti began to study the piano under Olga Samaroff, a seasoned pianist, who had the privilege of studying under Antoine Francois Marmontel and Ernest Jedliczka. As a young man, Persichetti continued his education at the Curtis Institute of Music, a conservatory in Philadelphia, and attained a master's and a doctorate degree. Although Persichetti was a student of the Curtis Institute, he held the position of head of the theory department. In 1941, Persichetti married Dorothea Flanagan, a fellow student of piano at the Curtis Institute. As a young composer before the age of 35, many of Persichetti's works demonstrated his thorough appreciation and admiration of older composers such as Aaron Copland, Igor Stravinsky, Bartok, and Hindemith. In 1947, Persichetti was invited to join the faculty of the Juilliard School of Music.

During the 1950's, Persichetti was perceived to "truly achieve his own distinctive voice," in the words of Walter G. Simmons. One of Persichetti's most revered compositions is his Concierto for Piano, Four Hands. This due was first performed at the Pittsburgh International Contemporary Music Festival on November 29, 1952. The piece itself gives the listener the illusion that the two pianists are having a pleasant conversation, without using words, but just musical notes. The duet featured both Vincent and Dorothea Persichetti as the performers. In his review in the Manchester Guardian, Colin Mason stated, "The Concierto for Piano, Four Hands was for me one of the most interesting stimulating American works of the Pittsburgh International Contemporary Music Festival."

Persichetti's Piano Sonata No. 10 was also a notable one of his compositions. This work, composed in 1955, is considered to be Persichetti's "longest and possible most elaborate of the composer's piano sonatas." His 10th sonata, a movement of which takes twenty minutes to perform, is viewed as a "highly cerebral music with charm, grace, tenderness, and dynamism." A distinctive characteristic of his compositions is the continuous development of a meditative state of mind among his audiences. Persichetti continued to baffle many students and colleagues with his fluency in composing beautiful harmonies and interactions between the orchestra and soloist. Tha was demonstrated in his Piano Quintet, Opus 66 which was composed in 1954 to be performed by a piano with the accompaniment of strings, and his Symphony No.5, "Symphony for Strings," which was performed by the Philadelphia Orchestra and commissioned by Riccardo Muti and Charles Dutoit.

Persichetti added to his prolific music career by writing an instructional book, Twentieth Century Harmony, Creative Aspects and Practice, which is valuable to students because of its literary clarity and its in-depth analysis, which "reflect his all-encompassing experience as a composer, performer, scholar, and artist-teacher." The organizational scheme of this literary, instructional book is "clear and complete," as a result of its well segmented chapters, which "progresses logically from the relatively simple to complex." Persichetti's non-partisan method of writing allows the reader "to examine what composers of this century (the 20th century) actually have accomplished and, further, to organize the harmonic materials 20th —century-composers have created in terms of objective presentation of the problems, procedures, and solutions." Since the book does not solely discuss Persichetti's method of composition, so students are able to compare and contrast Persichetti's methods and sources of inspiration from those of other great American composers. Twentieth Century Harmony also provides the reader with a humorous, idiom unique to Persichetti. For instance, William Schuman writes: "Persichetti is too impatient to be obliged to use a whole phrase to describe a harmony combining the major and minor modes." His solution was embodied in the word "mijor." Persichetti was skilled in his ability to play both the piano and organ, affinity to score read, transpose, and produce his own musical masterpieces. This book serves to map out necessary measureson how to become an effective composer.

Persichetti's musical career was one worthy of merit and distinguished awards. He won the Guggenheim Fellowship. The Guggenheim Fellowships are grants that allocate the composer a minimum time of six months and a maximum of 12 months to creatively compose with as much freedom as necessary. Persichetti received three Guggenheim grants during his career. Persichetti also received grants from the National Foundation on the Arts and Humanities, a federally funded program that was established in 1965 and allots grants to artists for projects in the arts, education, and research in humanities. Another distinction was Persichetti's grant from the National Institute of Arts and Letters. In 1898, the Institute was founded for the purpose of nurturing literature and the fine arts in the U.S. Only 250 members exist in this institute and are only given grants based on original, creative work of outstanding merit.

However, on August 15, 1987, this talented composer, educator, and performer died. Vincent Persichetti was a permanent resident of Philadelphia, Pennsylvania, from early childhood to the end of his life in 1987.