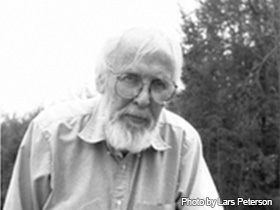 Bradford native Peterson was the author of The Littles children's book series.

Born and raised in Bradford, Pennsylvania, John Lawrence Peterson wrote and illustrated children's books for over 30 years. He achieved enduring success for his Littles books series.

John Lawrence Peterson was born in Bradford, Pennsylvania on February 10, 1924. After graduating from Bradford High School in 1941, he began studying illustration at the Pratt Institute in Brooklyn, New York. In 1943, he left the Pratt Institute and volunteered for the paratroopers. He fought for three years with the 11th Airborne Division and took part in combat on Leyte and Luzon in the Philippine Islands during World War II.

After the conclusion of the war, Peterson returned to his studies and graduated from the Pratt Institute in 1948. He began working as a freelance illustrator in New York City, where he contributed to advertising campaigns, magazines, and textbooks. But he had hopes of illustrating children's books.

In 1964, he wrote a children's book with his wife, Holly Peterson, solely so that he could illustrate it. That book, originally entitled Tony's Treasure Hunt and eventually renamed Terry's Treasure Hunt (1964), has sold over 1,000,000 copies in paperback. In writing Terry's Treasure Hunt, Peterson discovered that he enjoyed writing more than illustrating; he then went on to write and illustrate The Secret Hide-Out(1965) and Enemies of the Secret Hide-Out (1966), which sold 2,700,000 copies combined in hardcover and paperback editions. Although his first three books achieved notoriety, his greatest success has come from being the author of the Littles Books Series. Written for ages nine to twelve and recommended as pre-chapter books, the 14 book series about the life of a tiny family that lives in the walls of the Biggs family's house has 10,500,000 copies in print. Special editions of the Littles Books have been published in Great Britain, Israel, and Iceland. Littles Books were also the basis of a Saturday morning cartoon, The Littles (1983 - 1985), as well as two full-length animated films, Here Come the Littles (1985), and Liberty and the Littles (1986). Author Teddy Slater enjoyed the series so much that hebegan working with John Peterson to produce and co-author The Littles First Readers Series: a series based on the Littles Books but geared toward children from ages four to eight.

Peterson wrote over 50 children's books, 26 of which have been published. In addition to writing and illustrating books, Peterson traveled to 34 states, including revisiting his home state of Pennsylvania, to speak and present a slide show, How I Write Books and How They are Published, to children, teachers, and librarians on behalf of his publisher, Scholastic Inc. Also, he was a member of the Author's Guild for over 30 years.

Peterson's extraordinary success from The Littles Books Series and the enjoyment he found in writing and illustrating was the result of a lifetime of dedication to children. He volunteered for the Boy Scouts and he designed and directed a Cub Scout day camp in Stony Point, New York. Peterson and his wife also created and taught their own Sunday school curriculum at Saint James Church in Callicoon, New York. They have four children: Christopher, 50; Matthew, 47; Joel, 34; and Elizabeth, 30, along with nine grandchildren and three great-grandchildren.