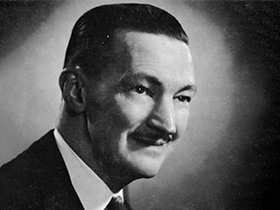 Novelist and science fiction writer, H. Beam Piper lived and wrote in Williamsport until his death in 1964.

Science fiction and mystery novel writer Henry Beam Piper was born on March 23, 1904, in Altoona, Pennsylvania. He was self-educated and worked for the railroad until he published his first book, Little Fuzzy, in 1962. The author received little critical attention or praise until after his apparent suicide. His hard-to-find books have now gained a cult-like following.

H. Beam Piper was born on March 23, 1904, in Altoona, Pennsylvania, to Herbert and Harriet Piper. He was married to Betty Hirst and after several years of a rocky marriage, they were divorced with no children.

After being expelled from high school, Piper was forced to educate himself. He had interests in history and science, the two subjects which would inspire him to write and would also become the subjects of his works. At the age of eighteen, he got a job working on the engineering staff of the Pennsylvania Railroad and also worked the third shift as a night watchman. Piper lived with his mother until she died in 1955. A member of the National Rifle Association, Piper had his own sword, knife, and gun collection, with over one hundred antique and modern weapons and accessories.

Piper's writing career began with the publication of the mystery novel, Murder in the Gunroom (1953), a story that would cause speculation at his death. Some would say that the story in the novel and his own death were frighteningly coincidental, therefore, leading them to believe that his suicide was actually a murder. He incorporated the mystery themes into his science-fiction novels and in 1962 published Little Fuzzy, his most famous work.

His work incurred mixed reviews and he received no awards and very little acclaim during his lifetime, although he would gain a great cult following posthumously.

Piper's marriage to Betty Hirst deteriorated and ended in divorce. He had also been dealing with financial problems and did not like relying on the charity of others. H. Beam Piper died in 1964 on either November 5 or 6 in Williamsport, Pennsylvania after taking his own life with a revolver from his gun collection.