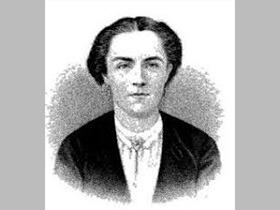 Noted poet and educator, Rebecca Smith Pollard, was born in Allegheny County in 1831.

Kate Harrington, also known as Rebecca Smith Pollard, was born in Allegheny County in 1831. Pollard wrote and published books, and eventually turned to poetry. A teacher turned writer, Pollard's work greatly contributed to the field of reading. She created the first textbook to focus on phonetics, which them prompted the production of many more readers to assist both children and teachers. She died in Ft. Madison, Iowa, on May 29, 1917.

Kate Harrington, later known as Rebecca Smith Pollard, was born in Allegheny City, now Allegheny County, Pennsylvania on September 20, 1831. Her father, a playwright and authority on Shakespeare, moved her family around quite a bit, but Pollard spent most of her life in Iowa. Eventually, she married New York poet and editor Oliver I. Taylor.

Pollard began her teaching career in Kentucky, then continued teaching in Chicago. Later, she began her writing career with the Louisville Journal, which opened the door to more opportunities in writing. Her first work, entitled Letters from a Prairie Cottage, included a children's section that included various tales of animals. She wrote other children's books, but her real impact on the field of reading came in the form of phonetic textbooks.

Few women have single-handedly contributed so much to the field of reading as Rebecca Smith Pollard. She pioneered efforts in creating a reading program focused on intensive synthetic phonics. Pollard's 1889 work Synthetic Methods was the first textbook to focus on phonetics, and this prompted more readers to be produced. She eventually expanded her readers through six grade levels and produced an advanced spelling book. Pollard put out teacher's manuals as well as spelling and reading books. Her series is important for its high correlation of spelling and reading instruction, as well as its concern for the interests of children and its incorporation of music into the process of learning to read. Synthetic Methods was the forerunner for all other phonics books and systems.

Pollard also published books of poetry, including Maymie and Centennial, and Other Poems, a book of poems published in 1876 to commemorate the one-hundredth anniversary of the Declaration of Independence. This volume included poems about Iowa, as well as selected poems of Harrington's father, and illustrations of the Centennial grounds in Philadelphia.

Pollard wrote almost all her life, even at age 79 when she wrote poem Althea, which relates to life in Iowa. Pollard died on May 29, 1917 in Ft. Madison, Iowa. In 2002, Pollard was nominated into the Reading Hall of Fame for her immense contributions to the field of reading.