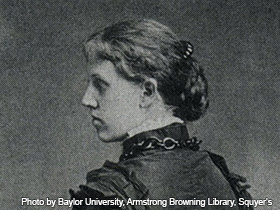 Porter was a co-founder of Poet Lore, a monthly magazine that was devoted to Shakespeare, Browning and the Comparative Study of Literature.

Charlotte Endymion Porter was born in Towanda, Pennsylvania, in 1857. She remained there until she left home for college. After graduation, she became the editor of Poet Lore, a poetry journal still in production today, and an expert on the lives and works of Shakespeare and Elizabeth and Robert Browning. After spending much of her life in Philadelphia with her life partner Helen A. Clarke, Porter spent her later years in Massachusetts and Maine.

Charlotte Endymion Porter was born in Towanda, Pennsylvania, on January 6, 1857. She began her life as Helen Charlotte Porter but later changed her name. She discarded her first name and adopted "Endymion," from a poem by John Keats. She graduated in 1875 from Wells College, in Aurora, New York.

At the age of 26, Porter became the editor of Shakespeariana, a journal published in Philadelphia by the Shakespeare Society in New York. It was in Philadelphia that Porter met her lifetime partner, Helen Archibald Clarke, the author of an article about music in Shakespeare that had been accepted by Shakesperiana. Clarke was also a native Pennsylvanian, born in Philadelphia on November 13, 1860. After the two met, they did almost all of their literary work together, for both were American writers, editors, and literary critics with a special fondness for William Shakespeare and Robert Browning. Together they introduced America to Europe's leading literary figures, especially in poetry. Porter alone put together a 40 volume piece entitled First Folio Edition of Shakespeare (1903 - 1912). She was also a translator and very well-known poet in her day.

Porter and Clarke are best known for Poet Lore, a journal they began together in Philadelphia in 1889. When they were offered office space in exchange for three pages of advertising in the journal, the pair moved Poet Lore to Boston. In 1903, Porter and Clarke sold Poet Lore, though they continued to edit the journal for some years afterward. Poet Lore is still published today, making it the oldest published poetry magazine in the United States. Porter and Clarke exchanged rings in a commitment ceremony and lived together until Clarke died at age 65. After her partner's died, Porter then spent most of her time living at their summer home on the Isle au Haut in Penobscot Bay, Maine.

Charlotte Endymion Porter died at her home in Melrose, Massachusetts, on January 16, 1942, just ten days after her 85th birthday.