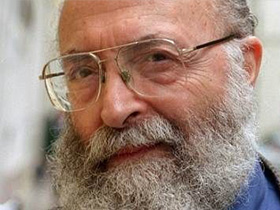 Chaim Potok, a novelist (The Chosen (1967) and The Promise (1969)), and editor (Jewish Publications Society), lived much of his life in Philadelphia and died in Merion.

Born Herman Harold Potok on February 17, 1927, in New York City, Potok was raised by his Orthodox Jewish parents. The internal conflict he faced between being an Orthodox Jew and being an artist fueled his fiction and nonfiction writing. Potok's best-known works‚ The Chosen (1967) and The Promise (1969), for example‚ examine Jewish culture and their relationships inside American society. A trained rabbi, Potok was an important figure in 20th century Jewish-American literature, both nationally and in Pennsylvania. By the time Potok passed away in Merion, Pennsylvania, on July 23, 2002, he had established himself as a devout Jew and an expert of narrative.

Herman Harold Potok (Hebrew name: Chaim) was born in New York City, to Polish-Jewish immigrants Benjamin Max and Mollie Potok, on February 17, 1927. Raised in an Orthodox Jewish family and environment, a young Potok struggled to maintain his interests in painting and fiction writing while simultaneously being faithful to the strict traditions of the Orthodox teachings. Literary works, such as James Joyce's A Portrait of the Artist as a Young Man, sparked Potok's interest in becoming a writer. Graduating from Yeshiva University with a degree in English, he showed promise by earning summa cum laude honors in 1950. To complement his undergraduate studies, Potok trained to be a rabbi at the Jewish Theological Seminary Teachers' Institute, where he graduated with a master's degree in Hebrew literature and won several awards, including the Hebrew Literature Prize.

Following the Korean War, in which he served as a chaplain, Potok married Adena Sarah Mosevitzky on June 8, 1958. Together, the couple had three children: Rena, Naama, and Akiva. During this time he began teaching at Jewish universities and institutes. In 1967, with the publication of The Chosen, Potok gained attention as an author of Jewish-American literature and as the editor-in-chief of the Jewish Publications Society based in Philadelphia, Pennsylvania. Throughout the eighties, he continued to write and was an important visiting professor at some of Pennsylvania's most well-respected universities, such as Bryn Mawr College and the University of Pennsylvania. Potok has often been recognized as one of the most influential Jewish-American authors of the second half of the twentieth century. His success comes from his ability to describe the conflicting nature of living in a religious community and a larger secular community. This theme is particularly dominant in his most popular novels, The Chosen and its sequel, The Promise (1969). In The Chosen, the main character Danny Saunders is expected to follow his father in becoming a leader in the Hasidic community, but Danny is more interested in secular studies, especially psychology. Although the conflict centers on the beliefs of different Jewish sects, the conflict is universal. Critics have both respected this novel and reproved it. Its dialogue and plot resolutions have been called boring and systematic. Nevertheless, The Chosen was nominated for the National Book Award and won the Edward Lewis Wallant Award, and The Promise received the Athenaeum Award. In addition, Potok examines the theme of family versus the individual in his third novel, My Name is Asher Lev (1972). Potok's autobiographically-based hero decides to isolate himself from his family to fulfill a desire to be an artist. Throughout his literature, Potok's life as a rabbi and writer provides a model for obtaining a rich balance of duty and rebellion to youth of any religion.

As a Jewish scholar, he played an important role in the Jewish community, both inside and outside Pennsylvania. He spent nine years editing for the Jewish Publications Society (JPS) in Philadelphia and taught around Philadelphia throughout his career. While working as editor of the JPS, Potok altered the reputation of the publishing house. Traditionally, JPS was interested in scholarly works, but that changed to a more liberal stance in Potok's tenure, as exemplified by the publication of The Jewish Catalog—a modern handbook for Jewish life. Later, his mastery of Jewish studies was demonstrated in Wanderings: Chaim Potok's Story of the Jews (1978). This was his first nonfiction piece, and it delivered a 4,000-year history of Judaism and its interaction with Western culture. Critics revered the work for the personalized style and intellectualism. During the 1990s, Potok focused on writing short fiction and children's literature.

Chaim Potok died in Merion, Pennsylvania, on July 23, 2002, at the age of 73, after enduring a long fight against brain cancer.