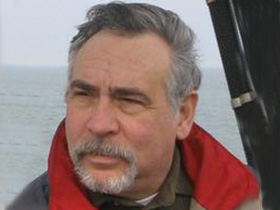 Dubois native and author of Hatteras Blue (1989), Poyer has written mostly sea adventure books, which are made fuller by his experiences in the U.S. Navy.

David Poyer was born in Clearfield County and grew up in the towns of Brockway, Emlenton, and Bradford of western PA. He is a Navy veteran who has written over 40 books that explore such genres and topics as the PA Oil Patch, underwater adventures, historical thrillers, sailing novels, and nonfiction, with many works translated into multiple foreign languages. He has presented or taught at numerous educational institutions and is (at the time of this writing) a Virginia Center of Creative Arts Fellow and teacher in the MA/MFA Creative Writing Program at Wilkes University in Wilkes-Barre and at the Ossawbaw Island Writers' Retreat.

David Poyer was born in DuBois, PAon November 26, 1949. He is the son of Charles and Margaret Poyer, a family who lived in "vicious poverty," as Poyer told Contemporary Authors Online. During the family's financial struggles they moved several times in the northwestern quarter of the state: Brockway, Emlenton, and finally Bradford. Books were one constant in Poyer's life, thanks to his mother, and he became interested in writing at an early age.

"I got the 'call' around age four or five," he tells Zinta Aistars of The Smoking Poet, "when my mother told me, while reading to me on the back porch, where books came from. 'Writers write them,' she said." Poyer decided then that he wanted to become a writer. But not before acquiring some life experience, he explains to Aistars.

After graduating from Bradford High School, Poyer wanted to see more of the world, so he applied for admission to the United States Naval Academy. He was admitted and became an officer of the line upon graduation. After six years of active Navy duty, Poyer transferred to the Naval Reserve and began his life of writing in his late twenties. Overall, he devoted 30 years to the Navy, serving in the Atlantic, Mediterranean, Arctic, Caribbean, Pacific, and the Mideast.

Few authors begin their publishing careers with quick success from the outset, and Poyer was no exception. He writes that he "did the garret-and-starvation routine in Norfolk, Virginia, trying to write novels" before beginning to get freelance writing work in regional magazines and specialty markets (mystery and science fiction). That time helped him develop the experiences and depth necessary to write his first two works: White Continent (1980) and Shiloh Project (1981).

Poyer has mined his naval experience and knowledge to incorporate into many of his books and has published sailing and nautical articles for Chesapeake Bay Magazine, Southern Boating, Shipmate, and Tidewater Virginia, according to Aistars. His series of novels based in the nautical world include: Tales of the Modern Navy (1998-2016), the Tiller Galloway series (1989-1998) (a mystery tale about a former Navy SEAL discharged for drug use), and The Civil War at Sea series (an historical, epic-novel) (2001-2005). He has also written stand-alone titles, such as The Only Thing to Fear (1996) and The Return of Philo T. McGiffin (1997), as well as the Hemlock County series (1988-1999), centered on a fictionalized compilation of the PA counties and communities he grew up in.

Poyer's novels have received enthusiastic praise from the naval community and critics alike, including being assigned as required readings as part of the "Literature of the Sea" course at the US Naval Academy at Annapolis, "along with that of Joseph Conrad and Herman Melville," says Aistars. However, Poyer explains that writers in the service are not always viewed favorably in his experience. "Actually there was a bit of pushback. Historically, writers don't pull a lot of weight in military circles. They're perceived as lightweights, if not non-team-players, especially if they argue against any policy or party lines," he says. "... [I]n my case, I was very careful to keep my writing and navy careers well separated."

Poyer has never shied away from taking social positions in his works either, for example, on topics such as the oil industry (his Hemlock County series), water rights (Down to a Sunless Sea [1996]), and the 1930s labor struggles (Thunder on the Mountain [1999]). Poyer goes on to tell Aistars that his "Navy books treat subjects like females and gays in military service, the enlisted vs. officer dichotomy, and the ever-present choice between the 'right' act and the 'expected' act. I don't pretend to have definitive answers, and I certainly don't think every literary work has to treat a serious subject. ... But if novelists don't raise these questions, at least now and then, who will?"

In his 34th novel, The Whiteness of the Whale (2013), Poyer's protagonist is female, and he tells Aistars about writing from her perspective: "...I don't really think of women as an opposite gender," he says. "Less of certain tendencies and a bit more of others...but not 'opposite.'" Whiteness of the Whale follows a crew of anti-whaling activists on a seafaring adventure thatKirkus Reviews refers to as "a frightening ride that will have [fans] reaching for their Dramamine." Poyer's other recent books include Ghosting (2010), The Tower's (2012), and two additions to the Modern Navy Series, The Cruiser (2014) and The Tipping Point (2015). He publishedOnslaughtin December 2016 andHunter Killerin November 2017.

On writing prolifically, Poyer says, "I teach writing at the Wilkes University Creative Writing program, and there, I'm considered the 'structure' guy . . . in that I believe in thorough planning before putting fingers to keyboard. ... It's a step by step process, from character sketches, to character matrices, to scene outline, to detailed outline, to first draft."

When not writing, Poyer enjoys "exploring the Bay and Atlantic coast" with his wife, novelist Lorene Hart, and daughter, Naia, in Nassawadox on Virginia's Eastern Shore, conveniently near the sea.

Tales of the Modern Navy Series