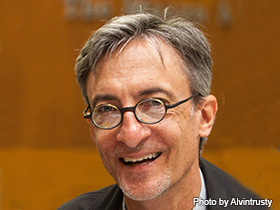 Christopher Raschka was born on March 6, 1959, in Huntingdon, Pennsylvania. He attended St. Olaf College, and graduated with a degree in biology. He pursued careers in both medicine and music before deciding to become a writer and illustrator of children's books. His portfolio of work is expansive, including more than 40 books. Some of his most well-known authorial works include Charlie Parker Played Be Bop (1992), Yo! Yes? (1993), and Elizabeth Imagined an Iceberg (1994). He won a Caldecott honor recognition for Yo! Yes? in 1994, and in 2006, he won the Caldecott Medal for his illustrations in The Hello, Goodbye Window (2005). In 2012, Raschka won the Caldecott Medal for his children's book A Ball for Daisy (2011), which he illustrated and wrote.

Christopher Raschka was born in Huntingdon, Pennsylvania, on March 6, 1959. His parents are Don Durnbaugh, who a historian, and Hedda Raschka Durnbaugh, a translator. He married Lydie Olson, a teacher and writer, on August 4, 1984, and together they have one son.

Raschka graduated from St. Olaf College in Northfield, Minnesota, in 1981 with a B.A. in biology. After graduation he worked for one year as an intern at a children's orthopedic clinic in Germany. It was this experience that first sparked an interest in Raschka for working with children. A few years later, after applying and being accepted to medical school at the University of Michigan, Raschka decided on the day of registration to drop out and pursue a career in writing. Throughout the early years of Raschka's life, another of his ambitions was to pursue a musical career. He was a member of both the Ann Arbor Symphony Orchestra and the Flint Symphony Orchestra. Raschka had plans to move to New York City to play with the big orchestras there, but while preparing for an audition he developed tendonitis in his wrist, which to this day prevents him from playing the viola.

Throughout the course of his career Raschka has received many awards and recognitions for his work. In 1992, he won the Best Books of the Year citation, Publisher's Weekly, the Notable Children's Book citation, American Library Association (ALA), and the Pick of the Lists citation, American Booksellers Association, all for Charlie Parker Played Be Bop. In 1994, he received the Caldecott Honor Book Award, and he was the ALA and U.S. winner of the UNICEF-Ezra Jack Keats award, both for Yo! Yes? In 2005, he received the Boston Globe /Horn Book Award nomination for The Hello, Goodbye Window.

Raschka was awarded the Caldecott Medal in 2006 for his illustrations in The Hello, Goodbye Window. The Caldecott Medal is awarded every year by the Association for Library Service to Children (ALSC) to the artist of the most distinguished American picture book for children, published in the preceding year. Award Committee Chair Gratia Banta said about Raschka's illustrations: "The richly textured tones of these expressive illustrations convey the emotional warmth of the intergenerational connection."

Raschka's work is innovative, using words and pictures to teach a lesson to children in a creative and fun way. In both his writing and his illustrations he tackles issues such as diversity, race, friendship, and how to deal with strangers. The School Library Journal's review of The Hello, Goodbye Window described Raschka's illustrations: "Awash in color, Raschka's exuberant illustrations bounce with joy." The New York Times said, "In Elizabeth Imagined an Iceberg he shows himself again to be a master of spare, rhythmic language and lively, intriguing illustration."

Charlie Parker Played Be Bop is a cleverly constructed story, where everything on the page has a meaning: the placement of the words, the corresponding objects and shapes that move with the words, and the sound and rhythm of the words as they come out of your mouth. The beat that the words in the story create matches with the beat of be bop, and is Raschka's way of introducing an older style of music, along with a brilliant musician, to younger children.

In The Hello, Goodbye Window, Raschka's drawings are creative and exciting. He uses watercolors to bring to life a child's visit to her grandparent's house. The mysteries of the magical hello, goodbye window are depicted with bright and vibrant colors. The images bring the story to life, while the use of an interracial family introduces children to diversity.

In 2012, Raschka won his second Caldecott Medal, an award honoring the most distinguished American picture book for children, for A Ball for Daisy. A Ball for Daisy, his first wordless book, chronicles a little dog's loss of his most prized possession and is ultimately "a tale of loss, recovery, and friendship." According to Caldecott Medal Committee Chair Steven L. Herb, "Raschka's deceptively simple paintings of watercolor, gouache, and ink explore universal themes of love and loss that permit thousands of possible variants."

Raschka's award winning story was sparked by his son, who had a beloved ball destroyed by a dog as a young boy, learning a life lesson on love and devastation. Raschka says it was "the first time he experienced something he loved ending, and that he couldn't get that back." Telling the tale turned out to be quite a challenge, according to Raschka. Because his audience is children, a major obstacle was "achieving the right balance between empathetic response without making it too upsetting for kids." Additionally, because this was Raschka's first wordless book, another challenge was drawing the same dog through different angles while ensuring the story evolves and conveys its intended meaning.

When choosing subjects for his children's books, Raschka reflects on emotionality, such as the loss and love portrayed through his art in A Ball for Daisy. He states that he chooses "anything that creates a strong emotion in me. Whether it's music, loss of something, loneliness or friendship—if that emotion is heightened in some way and painted to fit in between the covers of 32 pages, that can become a picture book."

While Raschka has resided in large cities for most of his life, he still holds a strong attachment to Pennsylvania, a place he deems home. When his hometown library in Huntingdon locally honored him for his latest Caldecott Medal, Raschka told The Daily News, "Though I spent most of my childhood in suburban Chicago, I was born in Huntingdon. For the past 20 years, since my mother moved back to town, when I take the train from New York City to see her it feels very much like coming home, to a real community, a real town, in the beautiful mountains. I claim Huntingdon."

Raschka currently lives with his family in New York City and continues his work as an author and illustrator.