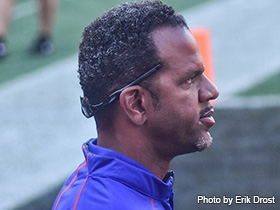 Athlete and philanthropist Andre Reed was born in Allentown

Andre Darnell Reed was born on January 29, 1964, in Allentown, Pennsylvania. After attending Kutztown University, he was selected in the fourth round of the National Football League (NFL) draft in 1985 by the Buffalo Bills. Playing wide receiver for the Bills from 1985-1999 and Washington Redskins in 2000, Reed won four American Football Conference (AFC) championships, made four Super Bowl appearances, and played in seven Pro Bowls. In 2010, Reed started the Andre Reed Foundation, which aims to help underprivileged children reach their full potential.

Hall of Fame football player Andre Darnell Reed was born on January 29, 1964, in Allentown, Pennsylvania. He grew up with parents Calvin and Joyce Reed, along with brothers Dion, Tyrone, and sister Teshia Reed. Born and raised on Hickory Street in Allentown's First Ward, Andre Reed has always had a tremendous passion for the game of football. As a kid and all throughout high school, Reed would tell his friends that one day he would play in the National Football League (NFL). However, growing up in a blue-collar neighborhood, it was more likely for Reed not to achieve his dream. As his friends would even tell him, "what you are going to be doing is bagging groceries." Reed never allowed his pals' opinions to affect him, as it was his mission to do everything they did not. Reed was always known as one of the hardest-working athletes; his college coach George Baldwin would always say, "he had a phenomenal work ethic." Whether it was Reed's Dieruff High coach, Bruce Trotter, or his Kutztown University coaches, Al Leonzi and George Baldwin, all of them have always expressed favorable comments towards Andre Reed.

Reed and his siblings have always been athletic and had burning competitive spirits. As Andre Reed once said, "I think I was born to play." Reed credits his father, Calvin Reed, more than anyone for his success and development. Reed's father wasted no time pushing his children into athletics and made sure that their energy was going towards good use. Reed and his brothers, Tyrone and Dion, shared a love for sports, specifically football. All three began playing football at the midget level under their father Calvin, coach of the downtown Allentown Youth Center. Reed has been quoted saying, "we were the most competitive family in Allentown." When the three Reed brothers were not taking part in a team activity, their father would push them to their limits at Fountain Park and Roosevelt Park. Reed's father would set up races, calisthenics courses, and other competitive events between the three boys and along with their friends. Reed began fine tuning his football skills at a young age, as he and his father, brothers, and friends played football against each other daily.

As Andre Reed grew older, he attended Dieruff High School and did not see the playing field until his senior year. Reed's lack of playing time made sense; his lack of size at about six feet tall and only 155 pounds held him back. However, Reed's competitive drive was a characteristic that was impossible to weigh. Reed, the starting quarterback for Dieruff's football team his senior year, led them to an undefeated season, while rushing for over 100 yards in at least six different games. Reed received much recognition from Division I schools, such as West Virginia, Penn State, Temple, and Pittsburgh; none of them, however, were too serious about Reed due to his size. Not one scholarship was offered; all of those schools wanted him to attend a junior college in order to gain experience and develop physically, because he was too skinny.

Reed's final decision was to attend nearby Kutztown University, about 20 minutes from his Allentown home. The institution runs a Division II football program, with statistics that reveal slim odds for reaching the NFL. However, Kutztown saw a lot of potential in Reed, but not as its quarterback. The Kutztown coaches suggested a position change for Reed to enable him to play sooner. Once Dieruff's starting senior quarterback, he was now Kutztown's youngest wide receiver, a position Reed never played. Reed's quick, explosive, and tough athleticism convinced the Kutztown coaching staff that he was a capable player who could afford to learn a new position, one that he would soon master. Reed was a tremendous play maker for the Kutztown Bears, as he set nine school receiving records and was named to the Pennsylvania State Athletic Conference All Conference Team three consecutive years.

Though Reed's football role changed, his focus on making it to the NFL did not. "There wasn't any doubt in my mind," Reed once said. "Even though I didn't play at a big school, I knew I could handle the competition. I knew if I got the chance to play, I could show my talents and show what I could do."

Ex-Buffalo Bills wide receiver, and current talent scout, Elbert Dubenion, had similar beliefs on Reed's behalf, as the Buffalo Bills organization began to take a genuine interest in Reed throughout his college career. Dubenion first discovered Reed in 1983 and was convinced of Reed's immense potential. What made Reed so special in Debenion's eyes, were his intangibles and raw ability. "He was fast, caught the ball well in traffic, he was just great. It didn't matter what level he came from, he could just play," Dubenion said. As Reed's collegiate career was coming closer to the end, he had been recognized by numerous NFL teams. As in high school, many teams were tentative about seriously pursuing Reed because of his size.

On April 30, 1985, Andre Reed was selected as the 86th pick in the fourth round of the NFL draft, by the Buffalo Bills. Reed at 21 years of age finally accomplished his lifetime dream and goal, after an early career full of adaptations and adversity Reed finally made it. Taking little time off after his senior year at Kutztown, Reed worked out every day by running, lifting weights, and catching passes so that when it was his time, he would be ready. Reed's first opportunity to prove himself to the Buffalo Bills came early in training camp on the first day of practice with his new team. Reed was thrown a pass that sailed across the middle of the field, and as he jumped off the ground to make the catch, his body was outstretched leaving him prone to suffer a painful tackle, which he did. However, Reed held onto the ball and said to himself, "if this is what the NFL is about, then I think I just passed my first test."

"One of Reed's most noticeable attributes was his toughness, and this is what made him special," said legendary and three time Super Bowl-winning coach, John Madden. After Reed proved he belonged in the NFL, his career took off. Reed finished his rookie season on a positive note, accumulating 48 receptions, 637 yards, and four touchdowns. Not the most impressive statistics; however, amongst other first-year wide receivers in the NFL, Reed's production was ahead of the group. As Reed's Hall of Fame quarterback and teammate Jim Kelly once said about him, "He wanted to be the best, the top man at all times." This attitude of Reed propelled his NFL career; he could not settle for just being mediocre, and his work ethic was bound to pay off at some point. Reed's career and value to his team substantially progressed, as it only took him four NFL seasons to earn a spot on the 1988 American Football Conference (AFC) Pro Bowl team. After NFL seasons, making a trip to Aloha Stadium in Hawaii for the Pro Bowl became a custom for Andre Reed, as he was selected to six more consecutive Pro Bowls.

For the most part, Reed's NFL career has been full of nothing less than success and accomplishments. However, one knock on his accolades is the fact his team lost four consecutive Super Bowls, starting with the 1991 season, which lead to Super Bowl XXV and would be a unforgettable season for him. During that 1991 regular season, Reed had one of his most prolific outputs, accounting for 81 receptions, 1,113 yards, and a career high of 10 touchdowns. That same year, his team ended its season by losing to the New York Giants in the final seconds of Super Bowl XXV, as kicker Scott Norwood missed a 47-yard field goal attempt that would have won the game. Although the Bills earned three more consecutive Super Bowl appearances, they lost by a large margin in those following games.

Reed and the Buffalo Bills made their last Super Bowl appearance in 1994. Reed had yet another remarkable season, setting a new career high with 90 receptions, along with 1,303 yards, and eight touchdowns. Unfortunately, that 1994 season ended with a 30 to 13 loss against the Dallas Cowboys in Super Bowl XXVIII.

Setting aside Reed's Super Bowl misfortunes, his career can arguably be in the top ten wide receiver careers throughout the NFL's history. He holds almost every receiving record for his home franchise, the Buffalo Bills, and has accomplished much in comparison to other wide receivers. When he retired, Reed's statistics placed him in the top five in career receptions (he is currently in 11th place), receiving yards (now 13th), and receiving touchdowns (now 12th). The rankings have decreased because, as NFL Hall of Famer Howie Long has said, "today we are throwing the ball more than ever before, with three and four wide receivers on the field at once."

In 2010, Reed created the Andre Reed Foundation. Its mission is "to help underprivileged children reach their full potential and become responsible contributors to their communities." Reed's foundation headquarters are located in Allentown. The nonprofit organization has supported local charities, including the Boys & Girls Club of Allentown and the United Way. The Foundation brings in funds by hosting a yearly Celebrity Golf Classic, attended by NFL Hall of Famers Kellen Winslow, Dan Marino, and Terrell Davis among others. The Foundation also markets the "Over the Middle" all-purpose sauce that bears Reed's name.

In 2013, Andre Reed was hired to the Kansas City Chiefs' coaching staff. This is Reed's first job as a coach, in which he will be responsible for teaching the Chiefs' wide receivers technique, strategy, and development. "I've always wanted to be in coaching in some manner, but after I retired my kids were still young and I never pursued it because it's a lot of time, I didn't want to miss my kids growing up, but now's the right time," Reed said before the upcoming season. Another important motive for Reed to join the Chiefs' coaching staff now is because of the recent hiring of head coach, Andy Reid. Reed and Reid have been good friends for a long time, and as Andre Reed says, "Andy has done so much for the game."

After eight consecutive selections as a finalist for membership in the Pro Football Hall of Fame, Reed was elected as part of the Induction Class of 2014. His hometown newspaper, the Allentown Morning Call, spoke for Reed, his family, the Lehigh Valley, and his fans from Buffalo: "Fame, Finally." The Buffalo News' Tim Graham echoed the sentiment, sighing that Reed had been elected "at long last." Reed himself said "I heard they're raising the roof back home. You know my whole family has been resilient forever. I wanted this for them. And I wanted it for the [Lehigh] Valley. This puts a stamp on the Valley. I wanted this for them and I'm glad this is on my shoulders."

Since his retirement in 2000, Reed has been patient and willing, while offering various contributions to different organizations and people daily. Whether it is coaching young athletes, reaching out to children in need, or financially aiding Allentown youth programs, Andre Reed has remained dynamic and productive.