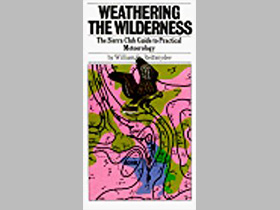 Meteorologist and hiker William Reifsnyder was born in Ridgway in 1924. After earning his BS at New York University, he served in the military and returned to academia, earning degrees in 1949 at Berkeley and 1954 at Yale. He specialized in the study of forest meteorology. His non-technical works concern hiking in the Alps and the White Mountains of New Hampshire. Reifsnyder was a professor emeritus at Yale University and lived in New Mexico. He passed away in 2006.

William Reifsnyder was born in Ridgway, Pennsylvania, on March 29, 1924. His parents were Howard W. and Madolin Reifsnyder. Following his secondary education, Reifsnyder matriculated at Syrcuse University, but later transferred to New York University where he earned his B.S. degree in 1944. From 1943 to 1947, he served in the Army Air Corps, becoming a first lieutenant. After completing his military service, Reifsnyder earned an MFat the University of California at Berkeley in 1949. During the early 1950s he met his future wife, Marylou Bishop, an artist, and married her on December 19, 1954. The couple had two children together: Cheryl and Gawain; Marylou also brought a daughter Rita to the marriage. That same year, Reifsnyder earned his PhDfrom Yale University.

Before coming to Yale, Reifsnyder had worked for the United States Forestry Service at the California Forest and Range Experiment Station researching forest fire meteorology. He also did work with the early atomic bomb tests, investigating their effects on forests. He even broadcast a series of programs on meteorology on a Berkeley radio station. While at Yale (beginning in 1955), he contributed greatly to his profession, publishing over 100 articles in scholarly journals. He also was the founder and long-time editor of the journal Agricultural and Forest Meteorology. He received the American Meteorological Society's award for "Outstanding Achievement in Bioclimatology" and was the vice-president of the International Society of Biometeorology. Reifsnyder also served as the chair of the advisory committee on climate to the U.S. Weather Bureau, the National Academy of Sciences, and the National Research Council from 1957 to 1963.

An avid hiker from his days in California and from his time as a visiting professor at the University of Munich in 1968, he came to love the Alpine regions of the world. He told an interviewer for Contemporary Authors Online that this experience "led [him] to...a variety of projects concerning recreational use of the wilderness." These included four books on the Alps and one on the White Mountains of New Hampshire.

Reifsnyder was a professor emeritus of Forest Meteorology and Biometeorology at Yale University and lived in New Mexico. He died at his home on November 3, 2006.