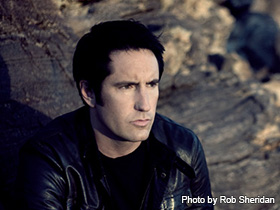 Born on May 17, 1965 in Mercer, Pennsylvania, Trent Reznor has become a mainstay on the American music scene for his personal style of industrial rock music. Reznor lived in the state until he left Allegheny College after his freshman year and moved to Cleveland, Ohio. In Cleveland, he worked on what would become his earliest released music and eventually became the man behind Nine Inch Nails. He is still making music, and has recently founded an independent record label, Null Corporation, and released two albums.

Born Michael Trent Reznor on May 17, 1965, in Mercer, Pennsylvania, Reznor would grow into a hallmark of 1990s industrial rock. Reznor's parents divorced when he was young, and he moved in with his grandmother, who signed the five-year-old up for piano lessons. Reznor later learned tenor sax and tuba in the school band and acted in musicals. Mercer was an athlete-centric community, Reznor said, and he found his college (Allegheny College in Meadville, Pennsylvania) to be "super fraternity oriented." He left Allegheny College after a year and moved to Cleveland.

Reznor moved into a different world in Cleveland. He shared an apartment with high school friend and former drummer Chris Vrenna, worked in a music store and recording studio and cleaned toilets, and played for several local bands. Reznor asked the owner of the recording studio where he worked if he could record there during off-hours. Owner Bart Koster said "yes," and Reznor set himself to work on his first album, the 1989 release Pretty Hate Machine.

The first record was mostly a do-it-yourself affair. For this album (archived in the Nine Inch Nails discography as Halo 2, meaning it is the second official Nine Inch Nails release) Reznor taught himself to use the recording studio's equipment and, except for drums, played all the instruments on the record. It also was different from other contemporary industrial music. Steve Huey, a reviewer for allmusic.com, explains the music at work behind the album: "Reznor had a background in synth-pop, and the vast majority of Pretty Hate Machine was electronic. Synths voiced all the main riffs, driven by pounding drum machines; distorted guitars were an important textural element, but not the primary focus. Pretty Hate Machine was something unique in industrial music—certainly no one else was attempting the balladry of 'Something I Can Never Have,' but the crucial difference was even simpler. Instead of numbing the listener with mechanical repetition, Pretty Hate Machine's bleak electronics were subordinate to catchy riffs and verse-chorus song structures, which was why it built such a rabid following with so little publicity." Reznor initially hoped to release a single in Europe, but after sending out a demo tape to American labels, he realized he had something else on his hands. Several labels offered him a record deal, and he eventually signed with the label TVT. Though the album was "ignored upon its 1989 release, [it] gradually became a word-of-mouth cult favorite" and reached its peak position of #75 on the Billboard 200 in late November, 1991.

By that time, Reznor had already been touring for about two years. Unlike in the studio, where he played most of the instruments, on tour Reznor used a backing band; the group toured as Nine Inch Nails. After touring with "dark avant-industrial" act Skinny Puppy, Reznor changed the band's performing context when he decided to open for more alt-rock style bands. It may have helped bring the band more mainstream recognition. Billboard.com reports that "the single 'Down in It' got some airplay in dance clubs, reaching Billboard's dance and modern rock charts, and MTV later picked up on the video for the more rock-oriented 'Head Like a Hole.'" In 1991, Nine Inch Nails joined the inaugural Lollapalooza tour, which introduced them to concertgoers around the country. Nine Inch Nails was gaining popularity, and Pretty Hate Machine would spend more than two years on album charts and sell more than a million copies.

Nine Inch Nails was financially lucrative. This success also brought stricter oversight from label TVT. Huey writes, "TVT had a massive hit on their hands, and to ensure that Reznor would produce another one, they attempted to take control of the follow-up's creative direction. Enraged by the outside meddling, Reznor tried to secure a release from his contract, leading to a vicious court battle." Reznor continued to work on side projects and eventually secured a release from TVT. He signed with the label Interscope and was able to set up his own label Nothing Records, as a subsidiary. In 1992, Reznor released his second major album (technically an Extended Play album, not a Long Play album), Broken. The EP would reach the seventh spot on the Billboard 200, and one of the singles of the album — "Wish"—won the 1992 Grammy Award for Best Metal Performance. Another song from that album would win a Grammy for a performance in 1994, a very good year for Reznor's music.

Reznor's first record away from TVT would be his biggest one yet. In 1994, he released The Downward Spiral, a 14-track album that would reach #2 on the Billboard 200, precipitating a Rolling Stone cover article and MTV airplay for the song "Closer." The popular record signaled a change in Reznor's oeuvre. "On this record," he said, "I was more concerned with mood, texture, restraint and subtlety, rather than getting punched in the face 400 times...The big overview was of somebody who systematically throws away every aspect of his life and what's around him—from personal relationships to religion. This person is giving up to a certain degree, but also finding some peace by getting rid of things that were bogging him down." The album also contained the song "Hurt," which was later covered most famously by country-rock star Johnny Cash.

The live version of Nine Inch Nails changed, too. Guitarist Richard Patrick left the group, and Reznor replaced him with Robin Finck. He also added bassist Danny Lohner, making the touring band Reznor, drummer and high school friend Vrenna, keyboardist James Woolley, Finck and Lohner. Apparently the setup worked—Nine Inch Nails won another Grammy for Best Metal Performance for a rendition of "Happiness in Slavery" played at Woodstock 1994. Besides his Grammy win, Reznor also produced Marilyn Manson's first album, Portrait of an American Family, and the soundtrack for Oliver Stone's movie Natural Born Killers. It would be five years until Reznor released his next major record. In the meantime, he kept busy.

Reznor worked on a variety of projects between The Downward Spiral and his next album. In 1995, Nine Inch Nails joined David Bowie's Outside tour. Reznor also continued his work with Manson, working as a producer on Smells Like Children and Antichrist Superstar, and he built a recording studio in a former New Orleans funeral home. 1997 was an eventful year for Reznor. In 1997, Reznor's friendships with both Manson and Vrenna stopped and Reznor's maternal grandmother, the woman who raised him from five-years-old, passed away. Also in 1997, David Lynch's movie Lost Highway was released; its soundtrack featured Reznor's producing work and new Nine Inch Nails single "The Perfect Drug." And the same year, he entered a rehab program for alcohol and heroin addiction. After coming clean, he sank back into the same habits while working on his next album, The Fragile. Reznor would eventually return to sobriety in 2001.

In October 1999, Reznor released The Fragile, which debuted at #1 on the Billboard 200. It had been a long trip to the album's finish, perhaps brought on by the constant experimentation and what The Fragile's engineer and co-producer Alan Moulder described as the unwritten rule of the work's creative process: "We'll try everything." Eventually, the work yielded the final product, one that journalist Anthony Bozza describes like this:

There is a journey at the center of The Fragile, one laden with dreamlike (and nightmarish) imagery and unexpected twists. It begins ominously and ends uncertainly, with a sense that space has been traveled but no destination reached. ... Is this a quest for self-discovery? A map of the subconscious? A diary of a co-dependent relationship? It could be all of them, and it could be none of them.

Despite its initially strong sales, The Fragile dropped quickly on the charts. Huey wrote that this quick drop might be attributable to the changes in the music landscape that happened between The Downward Spiral and The Fragile. A year later, Reznor released a remix of The Fragile, titled Things Falling Apart. Touring produced And All That Could Have Been. After And All That Could Have Been, a three-year wait preceded Reznor's next album, With Teeth.

With Teeth, Reznor's sixth album and fourth full-length studio album, was released on May 3, 2005, and soon earned the #1 spot on the Billboard 200 chart. According to Pareles, the album has sold half a million copies as of June 2008. The new release happened against the backdrop of legal wrangling between Reznor and an earlier manager. More tours followed; one of the supporting acts during these tours was slam poet Saul Williams, with whom Reznor would later collaborate on for The Inevitable Rise and Liberation of Niggy Tardust, the title of which alludes to David Bowie's work in the 1970s. Another example of Reznor's mold-breaking comes just before ... Niggy Tardust, with the release of the concept album Year Zero.

Year Zero featured a unique marketing strategy (though Reznor says the "marketing" isn't marketing per se, as a way to convince people to buy the album, but part of the concept of the work). The album is about the world in 2022, when humanity has careened wildly off course. Information about this dystopian future was gradually leaked to fans through riddles. For example, one concert t-shirt listing tour dates had highlighted letters that spelled out "I am trying to believe." Iamtryingtobelieve.com lead fans to a Web site about Year Zero. At Nine Inch Nails concerts, fans found USB drives in bathrooms that contained songs from the album. Other drives found at concerts contained audio files that, according to Huey, "when run through a spectrum analyzer, drew an audio wave in the shape of a phone number." The phone numbers led to answering machines with conspiracy theories. But as Reznor tells it, this is all part of the Year Zero concept. The hidden messages, the secret Web sites — these are the art itself, not a means to an end. Reznor had shown his ability to push the bar of standard musicianship. At times, he's remarked on the power record companies have over artists in contract with those companies. Soon he would take his artistic and financial matters completely into his own hands.

In 2007, Reznor and Interscope ended their relationship. It meant the end of Nothing Records, Reznor's label which had been financed by Interscope and the start of his new, independent label, Null Corporation. In 2008, Reznor released two albums, two months apart: Ghosts I-IV (36 instrumentals from work on Year Zero) and The Slip (a ten-track vocal album). It was a dramatic change from the multi- year gaps between previous albums, and perhaps symbolic of his break with a major label. He's pushed the bar—now he'll decide exactly where to push it.