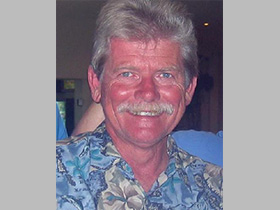 Rice, from New Castle, is the author of several science textbooks such as Prentice-Hall Earth Science.

Science textbook author Dale R. Rice was born in Lawrence County, Pennsylvania in 1948. Educated at Penn State, Rice became a high school science teacher before returning to Ohio State for his Ph.D. Since 1980 he has been a professor of education at the University of South Alabama. He has written a number of books for the high school science classrooms. Rice lives in Mobile, Alabama.

Dale Richard Rice was born on August 6, 1948, New Castle, Pennsylvania. He is the son of Paul and Charlotte Rice. After graduating from high school, Rice enrolled at Pennsylvania State University, earning first a B.S. in 1970 and then a Master of Education in 1973. During the time he was working on that M.Ed. degree, Rice also taught in the public school of Bethel Park, Pennsylvania. He then taught in the Hilliard, Ohio schools while working on his Ph.D. at Ohio State University. After a short appointment at East Carolina University (Greenville, North Carolina), Rice has been employed at the University of South Alabama in Mobile since 1980.

While Rice's academic requirements have stimulated a portion of his writing (nearly fifty articles in scholarly journals of education and science), he has also professed a mission to make science appealing to children. He told Contemporary Authors Online that he wished to convey the wonder and joy of science to students in all his writing, as well as teaching them the thought processes behind science, rather than just the rote memorization of facts that might quickly become outdated. Rice has used a number of methods for achieving this goal. During the early 1980s he co-wrote three textbooks on various modes of science for Prentice-Hall, influencing a whole generation of students. He has also been the educational consultant for Raintree Publishers' "Let's Discover" series, writing a volume on fossil fuels for them in 1983. In the realm of academic scholarship, Rice has been a contributing editor for the journal Educational Computer as well as a manuscript reviewer for Science and Children and School Science and Mathematics.

Professor Rice lives with his second wife Judy and works in Mobile, Alabama.