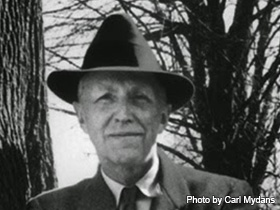 In 1951, Conrad Richter won the Pulitzer Prize in literature for his book The Town (1950). Richter wrote historical novels, many of which deal with Pennsylvania.

A longtime resident of Pennsylvania, Conrad Richter was born in 1890 in Pine Grove. Known for his frontier novels and detailed depiction of pioneer life, Richter wrote The Sea of Grass about New Mexico's farmers and ranchers in 1937. He also wrote the Pulitzer Prize wining novel The Town (1950). Richter then won the National Book Award for his self-inspired novel The Waters of Kronos (1960). Richter passed away a few miles from his birthplace in 1968 in Pottsville, Pennsylvania.

Born on October 13, 1890 in Pine Grove, Pennsylvania, Conrad Richter was the son of John Absalom and Charlotte Esther (Henry) Richter.Since his father was a Lutheran minister, the family traveled across Pennsylvania moving between various churches in small coal mining towns.Richter went to public school as a child; however, due to financial constraints he stopped pursuing his education after he graduated from high school at the age of 15.Between 1905 and 1909, Richter pursued various lines of work and was employed as a farmer, teamster, lumberjack, magazine salesman, bank teller, and clerk.It was only after finding a job as the editor at a weekly magazine, the Patton Courier, that Richter discovered his joy for writing.Following this passion, Richter traveled to Johnstown and Pittsburgh to find employment as a newspaper writer and editor.His experience as a journalist helped prepare him for his future career as a professional author, as Richter stylized his writing to be concise and straightforward.Furthering his careers, Richter settled in Cleveland, Ohio for 14 years. There he was employed as the personal secretary to a wealthy family.In 1915, Conrad Richter married Harvena M. Achenbach and in 1917 they had their first and only child, Harvena Richter.

While based in Cleveland, Richter published his first short story, "Brothers of No Kin," in Forum magazine.However, his $25 commission for this initial publication was dishearteningly slow and tiresome to obtain, despite the story's positive reviews. Richter even considered giving up his pursuit to be an author since he didn't believe a writer's salary could support his growing family.Instead of suspending his goals, Richter moved back to rural Pennsylvania and published his first collection of short stories in 1924.Brothers of No Kin and Other Short Stories was received with mixed success as it was praised for Richter's details and insights into local culture; although, his writing style was critiqued for being too uniform.With this in mind, Richter embraced the life of a professional writer.

In 1928, tragedy struck the Richter family as his wife, Harvena, was diagnosed with tuberculosis and was advised to travel to a warmer environment.From their small pine tree farm in Pennsylvania, the family moved to Albuquerque, New Mexico in the hope that they would find a reprieve for Harvena's illness.Once there, Richter was inspired by the culture and history of the desert land.Although his novels were categorized as American Westerns, Richter appeals to those suffering during the Great Depression by presenting an inspirational view of the struggles of pioneer life.Implying similarities between the generations in his 1936 work, Early Americana and Other Stories, Richter emphasizes the resilience of Americans to live through challenging and bewildering ordeals.A year after publishing this collection of Southwestern stories, Richter's next piece, The Sea of Grass (1937), drew national attention.

The Sea of Grass is not a traditional western. Rather, it is a revolutionary short novel that describes the 1800s hostilities between farmers and free-ranging ranchers from the point of view of the first white settlers.The contrast between the settled and free-ranging inhabitants of the West also resonated with Richter's audience as his book focused on the collision of the old and the new.In this way, Richter glorifies the spirit of past generations while implying that his contemporary Americans did not have the frontiersmen's strength of character in The Sea of Grass, as well as his other Southwestern novels: Tacey Cromwell(1942) and The Lady (1957). In a letter to Richter in 1941, Fraue Jerome Riley wrote, "Everyone whom I know, who has read THE SEA OF GRASS, feels as Weeks does: it is a classic of our times."In addition to glowing reviews, this novel also garnered the attention of literary circles, was nominated for the National Book Award, and won the Gold Medal for Literature.

Pining for his Dutch Pennsylvanian roots, Richter wrote a trilogy set in the Ohio valley called The Awakening.The first installment, The Trees, was published in 1940 and then preceded to winthe Gold Medal for Literature from Society of Libraries of New York University.Quickly following the first book, The Fields was published in 1946 and The Town in 1950 (which would go on to win the Pulitzer Prize in 1951).The books were very well received even years after publication.Richter wrote in a letter to Walter Edmonds, Esq. on August 22, 1943, "Letters from readers of The Trees have kept coming in from time to time the last several years, but your good word in July brought me a freshet of letters from new readers."In The Awakening, Richter once again explores pioneer life, but this time the frontier is the Ohio pine forests instead of the deserts of New Mexico.Outlining the settling of the dark and dangerous woods, Richter delves into the traditions and hardships of conquering the wilderness.In doing so, Richter conferred with his countrymen and fellow scholars to establish the intricate cultural facts, daily activities, superstitions, dialects, and hereditary names that make his novels credible.In a 1944 letter to Col. Henry W. Shoemaker from the Altoona Tribune, Richter requests a sequel to Pioneer Pennsylvania, a reference book to archaic Pennsylvanian slang. He queried, "I am at work on the second and concluding volume of THE TREES. If you happened to see the first, you know that I used to good advantage a number of oldtime expressions obtained from that very rich brochure of yours on pioneer Pennsyl vania [sic] words and phrases."Richter's diction facilitates his explanation of life on the frontier without copious historical references in a fiction novel, much to the approval of his critics.

Later in his career, Richter's renown grew when he wrote two novels with autobiographical themes.The Waters of Kronos(1960) won the National Book Award in 1961 and its prequel, A Simple, Honorable Man (1962), was published a year later.The Waters of Kronos features a writer returning to his now river flooded birthplace, while in A Simple, Honorable Man the writer's father enters into the Lutheran church to become a minister in order to help the needy and the poor.Not only do these novels follow Richter's life, they also share a nostalgic and yet candid view of his family.They specifically emphasize Richter's personal philosophy while he contemplates existence after death, religion, parental relationships, fate, freewill, and other intellectual quandaries.

After spending the last 20 years of his life in Pennsylvania, Conrad Richter died of a heart attack on October 30, 1968 in Pottsville.However a number of his pieces were celebrated posthumously.Disney converted Richter's novel The Light of the Forest (1953) to film in 1958. "One Desire," another one of Richter's pieces, is the basis for the 1955 movie by the same name.However, according to The New York Times' film critic, H.H.T., Universal International's new production was "a plodding, old-fashioned soap opera." Lastly Richter's The Awakening was adapted into a three-part television special called The Awakening Land in 1978.The movie and book both received positive reviews at their respective releases. Thus, Conrad Richter was well known in literary circles for his verisimilitude and heartfelt description of frontier life.