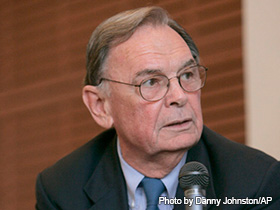 Gene Roberts has covered news events that include Vietnam and the Civil Rights Movement. While at the Philadelphia Inquirer, the paper earned 17 Pulitzer prizes.

Former executive editor at The Philadelphia Inquirer, Gene Roberts achieved national acclaim for leading the paper to 17 Pulitzer Prizes in an 18-year span. He was born June 15, 1932, in Pikeville, North Carolina. Despite his humble beginnings as a journalist in rural North Carolina, Roberts covered tough issues in the 1960s, including the Civil Rights Movement. His hard work as a journalist paid off as he ended up editing for newspapers such as the Detroit Free Press, The Philadelphia Inquirer, and The New York Times. In 2007, Roberts and co-author Hank Klibanoff won a Pulitzer Prize for their book The Race Beat: The Press, the Civil Rights Struggle, and the Awakening of a Nation (2007). Roberts is one of the most widely respected journalists of his era and many believe no one will ever match his drive and determination in running a newsroom.

Gene Roberts, a former executive editor at The Philadelphia Inquirer, achieved national fame for leading the paper to 17 Pulitzer Prizes in an 18-year span. He was widely respected for his high standards in journalism and ability to run a newspaper. A former reporter of his once said, "He's the ideal editor that a reporter dreams about."

Eugene Leslie Roberts Jr. was born on June 15, 1932, in Pikeville, North Carolina, to an area preacher, Eugene L. Roberts Sr., and Margaret (Ham) Roberts. While growing up in Goldsboro, North Carolina, Roberts's interest in journalism began to grow. It started when Roberts helped his father print a small weekly paper that was distributed to the local community. This interest extended through his teens and into his college years. He attended Mars Hill College from 1950 to 1952 before graduating from the University of North Carolina with a degree in journalism in 1954. After college, Roberts enlisted in the Military and served in the U.S. Army under the Counter-Intelligence Corps from 1954 to 1956.

After returning home from the Army, Roberts earned his first official newspaper job working for his home-town paper, Goldsboro News-Argus. At the time, it was the leading newspaper in Wayne County, North Carolina. His duties included writing for its farm column, "Rambling in Rural Wayne," and reporting on the local government. Later in his life, Roberts recalled the column, saying that he covered "the first farmer of the season to transplant tobacco plants from the seed bed to the field" and "a sweet potato that looked like Gen. Charles de Gaulle."

Roberts moved on to work for the Norfolk Virginian-Pilot (1958 to 1959) and Raleigh News & Observer (1959 to 1961) before being selected for a Nieman Fellowship by Harvard University in 1962. The Nieman Fellowship is a prestigious 10-month appointment at Harvard University for reporters, editors, photographers, editorial writers, and cartoonists with at least five years of full-time professional experience in news media. According to Harvard's Nieman Foundation for Journalism, fellows use this time "to step back from deadlines, to renew their intellectual curiosity and to enrich their understanding of the worlds they cover as journalists." As a result, Roberts spent his time at Harvard preparing a book with fellow Nieman award winner, Jack Nelson, called The Censors and the Schools (1963).

After spending time at Harvard, Roberts returned to the Goldsboro News-Argus and worked as its Sunday editor from 1962 to 1963. He then spent one year with the Detroit Free Press covering labor (1963 to 1964) and then one year as its city editor (1964 to 1965). In 1965, Roberts was one of the most promising young journalists in America. His hard work was not overlooked, as he was spotted by The New York Times. In 1965, they offered him a job as a chief Southern correspondent. Roberts accepted the position and spent two years covering many of the trials and tribulations of the Civil Rights Movement. When the Vietnam War started heating up, Roberts was quickly sent to South Vietnam in 1968. Once there, Roberts encountered a soldier who recognized his column from the Goldsboro News-Argus. Taken aback by the man, Roberts later wrote, "I learned never to underestimate readers. They can laugh with you at the Charles de Gaulle sweet potato stories, but they expect depth when stories arise that are important to them."

When Roberts returned to the U.S., The Times named him its national editor in 1969. He stayed there until 1972, when the Philadelphia Inquirer came knocking on his door. The paper was losing money and its journalistic qualities were coming into question. The Inquirer sought out someone who could bring energy and uphold high standards of journalism. Roberts was the perfect fit. He was hired as its new executive editor and change was immediate. With Roberts at the helm, The Inquirer tackled various local, national, and international issues. Topics varied from Pentagon spending to mental hospitals to South Africa. Stories such as these earned the respect from other journalists and newspapers across the country. The hard work paid off as the paper earned 17 Pulitzer Prizes in an 18-year span.

In a stunning change of events, Roberts announced his decision to leave The Inquirer at a noon meeting in 1990. Surprising most of his staff with the decision, Roberts became so emotional during his announcement that he left the meeting early. After numerous confrontations over budget cuts, Roberts finally had enough and resented an industry obsessed with profit margins. Hearing of Roberts's resignation, Bill Kovach, curator of the Nieman Foundation, said, "Gene Roberts or persons like him were the kind of people that Jefferson and Madison and George Mason had in mind when they carved out the role of journalists in a self-governing society." Roberts was known to say, "I didn't want to work for another newspaper. This is my newspaper."

Roberts kept his distance from newspapers by accepting a teaching job at the University of Maryland in 1991. In 1993, he received the National Press Club's "Fourth Estate Award" as a tribute to his lifetime of achievements in journalism. After a few years of teaching journalism classes, Roberts was persuaded by friend and executive editor of The New York Times, Joe Lelyveld, to become managing editor of The Times in 1994. Roberts took a three year leave of absence from Maryland in order to help a newspaper find its old identity. According to some at the time the newspaper was "socially rigid and out of step with the mood, views, and concerns of New Yorkers." Although Roberts was at The Times for only a few years, he reverted to the hard-nosed journalistic approach. By allowing journalists to take their time to find and write a good story rather than just write about the sensational, The Times produced several well-written stories and gained back some of its credibility. Roberts returned to the University of Maryland in 1997.

In 2007, Roberts, along with Hank Klibanoff, authored a book entitled The Race Beat: The Press, the Civil Rights Struggle, and the Awakening of a Nation, which explores how America's press system has evolved over time, going from ignoring race issues to realizing the importance of the 1950s and 1960s civil rights movement. Vanessa Bush, a Booklist contributor, wrote that Klibanoff and Roberts demonstrate the profound changes the movement wrought not only on U.S. social justice but also on American journalism. Other reviewers in addition to Bush have applauded the Roberts and Klibanoff for how they recognize the black journalists and editors who had been historically ignored and gone unnoticed. In 2007, Klibanoff and Roberts won the Pulitzer Prize for this book (Contemporary Authors Online).

Roberts currently lives in the Washington, D.C. area with his wife Susan and continues to teach journalism at the University of Maryland. Together Roberts and Susan have raised four children: Leslie Jane, Margaret Page, Elizabeth Susan, and Polly Ann. Roberts teaches classes on writing complex stories, newsroom management, and the press' role in the Civil Rights Movement. He enjoys his time away from the news field saying, "Four months off at the end of spring. Four to six weeks off during the Christmas holiday...that wouldn't have been possible if I were still in the newspaper business." Roberts also served as the American chairman of both the International Press Institute and the Committee to Protect Journalists. He is a former chairman of the Pulitzer Board for awards in journalism and arts and letters.