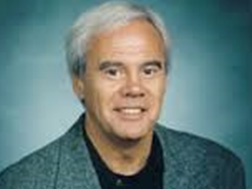 Leonard (Len) Roberts grew up in Cohoes, New York and began writing poetry at the age of 28. He published 10 books of poetry, including Black Wings (1989), The Trouble Making Finch (1998), and The Silent Singer: New and Selected Poems (2001), and several translations of the poetry of Sándor Csoóri, a famous Hungarian poet. For his work, Roberts received a multitude of awards, such as the Fulbright Scholar Award, the National Poetry Series Award, and the John Simon Guggenheim Memorial Award. He passed away in 2007 in Bethlehem, Pennsylvania, having taught English at Northampton Community College for more than 30 years.

Leonard (Len) Roberts was born the son of Raymond Roberts, a bread deliverer, and Margery Roberts, a textile worker, in Cohoes, New York. Throughout his childhood, he dealt with regular mistreatment from a dysfunctional family, incidents and characters who would reappear in Roberts' poetry later in life. Roberts attended Siena College and earned a BA in 1970, followed by an MA from the University of Dayton one year later. In 1976, Roberts received a PhD in English from Lehigh University in Pennsylvania.

The poetic career of Len Roberts was sparked by the death of his father when Roberts was 28-years-old. Writing poetry became his method of coping with troubling memories of the man who spent most of Roberts' youth under the influence of alcohol. After a year of writing, Roberts presented some of his work at Lafayette College in Easton, Pennsylvania, where the late poet Allen Ginsberg happened to be listening and detected a natural talent in him. Ginsberg sent Roberts' manuscript to a publisher, and soon afterward Roberts' first collection of poetry, Cohoes Theater (1980), hit bookshelves.

After he began writing, Roberts published 10 books of poetry and three book-length translations of work by the prestigious Hungarian poet Sándor Csoóri, whose powerful writing helped to inspire the 1956 Hungarian Revolution. In 1988, Roberts' fourth book of poetry, Black Wings, which focused primarily on life's randomness and the implications of death, earned him a highly respected National Poetry Series Award for poetry. Roberts received the John Simon Guggenheim Memorial Award for poetry just three years later. He also received two awards from the National Endowment for the Arts, one from the National Endowment for the Humanities, two Fulbright Scholar awards—one of which was for his translations—and many other honors.

Len Roberts' writing is distinguished by a unique focus and style that demonstrates a sharp perception and articulation of those simple experiences in life that matter most. His tone reflects a long-developed submission to the inevitability of dramatic changes and progress in life, with a focus on his own past. With this unique attitude, Roberts was able to reflect objectively, simply, and beautifully on his life in the present, a trait prevalent in the following excerpt from the poem "Contemplating Again the Jade Chrysanthemum; or, Why the Ancient Chinese Poets Remained Unmarried," which appeared in Roberts' 1998 book, The Trouble-Making Finch:

Cast out of the house again,
Fuming
at my wife, my teenaged son
who has come back from his previous
life
barely disguised as a pig who drops
underwear,
socks, books, video games anywhere,
I keep repeating it's no wonder
the ancient Chinese poets remained
unmarried.

Poet Stephen Berg appreciated this stylistic trademark in The Trouble-Making Finch, when he described it as a "rebirth out of the rubble of the past into a redemptive vision of being alive now."

Roberts immersed himself in the world of higher education ever since the beginning of his poetic career. For more than 30 years he taught English at Northampton Community College in Bethlehem, Pennsylvania, where he was distinguished as teacher of the year, among several other honors. Educating others was, in his own opinion, one of his most important contributions to society.

While teaching at Northampton Community College accounted for most of Roberts' time, he was also a visiting Professor of Creative Writing and Poetry at the University of Pittsburgh, Muhlenberg College, and Lafayette College. In the meantime, writing poetry never lost its place in his life. In 2001, he published the collection The Silent Singer: New and Selected Poems.

His poem "The Moment," from The Silent Singer: New and Selected Poems, was selected for publication by the Public Poetry Project of the Pennsylvania Center for the Book in 2004.

Len Roberts passed away after a brief illness on May 25, 2007, in Bethlehem. His final volume of poetry, The Disappearing Trick, was published posthumously by the University of Illinois Press in June 2007. Steve Myers, a DeSales professor of English, longtime friend to Roberts said in a 2007 tribute:

Len was a marvelous craftsman. He was always building a stone wall or painting an enormous barn or dredging a pond. And he went at poetry with the same kind of high energy. He lived richly and deeply and always in the world.