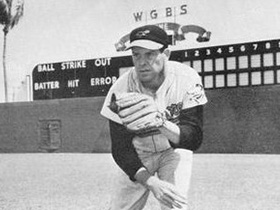 Hall of Fame pitcher Robin Roberts played for the Phillies from 1949 to 1961.

Born in 1926, Robin Roberts was a pitcher for the Philadelphia Phillies and the first Phillie elected to the National Baseball Hall of Fame. Residing in Philadelphia while pitching for the Phillies, Robin Roberts had a 286-245 record in his 19 major league seasons. Roberts also pitched in the majors with the Baltimore Orioles, Houston Astros, and the Chicago Cubs. A hard-nose competitor, Roberts ranks as the winningest right-handed pitcher in Phillies' history. He died in 2010 due to natural causes in his home in Florida.

Robin Evan Roberts was born on Thursday, September 30, 1926, in Springfield, Illinois. Growing up, Roberts served in the Army Air Corps, and, immediately after graduating from high school in 1944, he attended Michigan State University on a basketball scholarship. After some time, Roberts picked up baseball and made his way to the diamond, soon becoming the University's premier pitcher. Upon graduation, Roberts played independent league ball in Vermont, and in 1947, he was signed to a deal with the Phillies and joined the minor league team in Wilmington, Delaware. The Phillies brought him up to the main club in Philadelphia at the age of 22, launching his major league career.

In 1949, Roberts's first season, he was 20-11 and was among the league leaders in nearly every significant category. His 20 win season was the first of six consecutive, leading the team to their first pennant win in 35 years. Roberts led the National League in innings pitched with 315 in 1951. He also led the National League with 198 strikeouts in 1953 and 185 in 1954. Because of his outstanding control and extraordinary durability, Roberts topped the league in victories four years in a row. Roberts was named the National League player of the year by The Sporting News in 1952 and 1955, and he was chosen for the All-Star team seven years in a row.

In 1957, Roberts had his worst and most frustrating year with his record dropping significantly to 10-22. He continued to work hard during the next three seasons but never matched his earlier efforts. After the conclusion of the 1961 season, Roberts was released by the Philadelphia Phillies. He then tried out in spring training with the New York Yankees but was released shortly after the season began.

After being released by the Yankees, he joined the Baltimore Orioles and had several successful seasons. Roberts was 42-36 with them before returning to National League with the Houston Astros during the 1965 season.

In 1966, Roberts retired after pitching for Houston and the Chicago Cubs. In the same year, Roberts introduced Marvin Miller and lobbied for him to become executive director of the Players' Association. After he became the Players' Association executive director, Miller became the key figure in the creation of free agency in baseball. That act, begun by Roberts, changed the way baseball, and eventually all professional American sports structured the player-management relationship. His final major league game was on September 3, 1966, but he continued to pitch in the minors during 1967. About ten years later, in 1976, Roberts was elected to the National Baseball Hall of Fame. In regards to his induction, Roberts said, "You play ball and never anticipate anything like this. It is a thrill to know that you belong there."

The Phillies went into the history books for their dramatic victory in 1950, and the players from that year became known as the Whiz Kids. Robin Roberts wrote a book about them entitled The Whiz Kids. Roberts recounts the moves, the trades, and the developments that put this young and talented team together. Co-author C. Paul Rogers III interviewed many of the other players from that memorable season and manager Eddie Sawyer. Roberts also wrote an autobiography named My Life In Baseball, which is a book about the Hall of Famer's remarkable career and life that altered the way the game would be played forever.

Roberts was married to his wife Mary Roberts until his death on May 6, 2010, when he passed away from natural causes in his home in Temple Terrace, Florida. He was 83 years old. In honor of Roberts, the Phillies wore a patch with his player number (36) on their uniforms and hung his jersey in the dugout for the rest of the 2010 season. Few players have shaped the game of baseball the way that Robin Roberts did, both on the field and in the boardroom. Robin Roberts was an amazing pitcher who made an impact on baseball history.