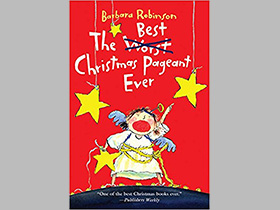 Robinson, a Berwyn resident, wrote The Best Christmas Pageant Ever (1972), one of the best-loved Christmas stories of any generation.

Barbara Robinson was born in Ohio on October 24, 1927. She began writing poetry at a young age and by adulthood had published over 40 short stories in national journals, including "Best Christmas" in McCall's (1971) ‚ the genesis of her most celebrated work, The Best Christmas Pageant Ever (1972). She was a Breadloaf Fellow and the recipient of numerous awards, including the Young Hoosier Book Award and Library Association (ALA) Notable Children's Book Award. On July 9, 2013, at age 85, she died of cancer at her home in Berwyn, PA, leaving behind two daughters and three grandchildren.

Barbara Robinson was born Barbara Jean Webb on October 24, 1927, in Portsmouth, Ohio, to parents Theodore L. and Grace Mooney Webb. Robinson lost her father early in life and grew up with her widowed mother and the company of aunts, uncles, cousins, and the neighbors of her small river town.

She began writing poetry at an early age, and by adulthood had published 40-50 short stories for McCall's, Ladies' Home Journal, Good Housekeeping, Toronto Star Weekly, and Redbook—including the story "Best Christmas" in a 1971 issue of McCall's that was the genesis of her most beloved children's book, The Best Christmas Pageant Ever (1972). She also worked as a librarian for a time prior to her marriage.

According to family lore, Robinson had been out with a friend when several Navy men approached them, and she'd singled out John F. Robinson: That's the one I want, she'd told her friend. In 1949, she married John F. Robinson, with whom she had two children, Carolyn and Marjorie. Robinson received her Bachelor of Arts in 1948 from Allegheny College, from which she would later receive an honorary doctorate of letters (1996).

The Best Christmas Pageant Ever has sold over 800,000 copies and was adapted into a play, first performed in Seattle at the Children's Theater in 1982. ABC television also produced Robinson's screenplay of the story as a television movie in 1983 starring Loretta Swit. There is also an audio version of the book read by Elaine Stritch. Since the early 1980s, The Best Christmas Pageant Ever has been performed at Christmastime in churches, classrooms, and children's theaters across the country, finding its largest, more enduring audience as a play.

The Herdmans, the infamous characters from The Best Christmas Pageant Ever, appear in two of her subsequent books: The Best School Year Ever (1994) and The Best Halloween Ever (2004). Robinson wrote several other children's books, many of which were influenced by her summer vacations in Massachusetts near Plymouth County. In 1962, Robinson was a Breadloaf Fellow. For The Best Christmas Pageant Ever, she received the Georgia Children's Book award (1976), Young Hoosier Book Award (1978), Maud Hart Lovelace Book Award (1982), and American Library Association (ALA) Notable Children's Book Award (1999).

Barbara Robinson died of cancer on a Tuesday, July 9, 2013, at her home in Berwyn, PA. She was 85. She is survived by daughters Marjorie Pinto-Leite and Carolyn Robinson, and three grandchildren: Tomas, Marcos, and Lucas. Her husband of 45 years, John F. Robinson, died in 1995.

In a New York Times interview, Pinto-Leite says that her mother's fictional characters:

"[C]ame from her very, very vivid imagination. My memory as a kid is coming into the house and seeing her standing at the island in the kitchen, typing away at her typewriter. To me, that was just Mom."