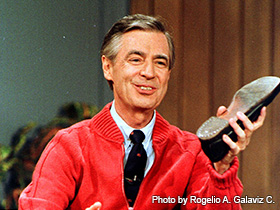 He began his career with producing and directing at stations such as the National Broadcasting Company (NBC) in New York and WQED in Pittsburgh, Pennsylvania. In 1952 he married Joanne Byrd, a fellow Rollins graduate, and they had two children. Rogers was asked back to WQED and he produced his first children's show, Children's Corner, which aired from 1954 to 1961. For this show, Rogers was the producer, writer, composer, and he even did the puppeteering. While working, he attended the Pittsburgh Theological Seminary and the University of Pittsburgh's Graduate School of Child Development. In 1962, he graduated magna cum laude from the seminary and was ordained a minister in 1963.

Rogers worked on several other shows before his hit show, Mr. Rogers' Neighborhood, which aired in Canada in 1962, and ran until 2001, becoming PBS's longest running program. Through his soft voice, use of puppets, and a simple set-up to his program, Rogers helped children confront fears and learn to deal with them in a constructive manner on Mr. Rogers' Neighborhood, and has since become a cultural icon.

He won many awards, not only for his educational television shows, but also for his motivation and enthusiasm for child development. In 1997, he won the Emmy Lifetime Achievement Award. He won the National Educational Television Award for excellence in children's programming as well. Rogers was inducted into the Television Hall of Fame in 1999 and has also received over 35 honorary degrees from colleges and universities such as Yale University in 1974 and Carnegie-Mellon University in 1976. He was also commemorated on the Hollywood Walk of Fame with a star at 6600 Hollywood Boulevard. In 2002, Fred Rogers was awarded the nation's highest civilian honor, the Presidential Medal of Freedom. The award citation reads: Fred Rogers has entertained and educated children for more than 30 years through his extraordinary public television program, Mister Rogers' Neighborhood. His program helps children understand caring, safety, and respect for others, and his legendary commitment to young people has been an enriching part of American life. The United States honors Fred Rogers for his dedication to the well-being of children, his faith, his family, and his community, and for a career that demonstrates the importance of kindness, compassion, and learning.
After being diagnosed with stomach cancer, Rogers died on February 27, 2003 in Pittsburgh, Pennsylvania.