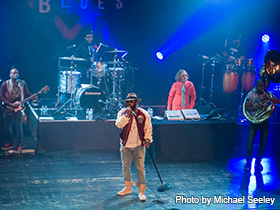 The Grammy-winning rap group The Roots hails from Philadelphia.

Ahmir Thompson and Tariq Trotter were classmates at the Philadelphia High School for Creative Performing Arts and formed the original lineup for The Roots in 1987. They made their debut in 1993 and are now working on their tenth album. With a Grammy Award for Best Rap Performance By A Duo Or Group for their hit track You Got Me and multiple other nominations, The Roots have established themselves as the most influential and best live act in hip hop music.

The Roots are a Philadelphia-based hip-hop band that originated in 1987 when Ahmir Thompson and Tariq Trotter first met while attending Philadelphia High School for Creative Performing Arts. Thompson was a jazz drummer and Tariq was an aspiring MC. Soon after meeting they decided to collaborate in an effort to pursue their mutual dream of making innovative music. Both Thompson and Trotter chose to adopt more clever stage names, so Ahmir Thompson took on the name "Questlove" and Tariq Trotter changed his name to "Black Thought." Together they called themselves Square Roots. The Square Roots trained day in and day out by performing throughout the streets of Philadelphia and at various talent shows. They focused their work on into live music and influential lyrics.

In 1991, Black Thought attended Millersville University in Millersville, Pennsylvania. There he met rapper Malik B., who was also a student. Bassist Leonard "Hub" Hubbard and keyboardist Scott Storch, later replaced by Kammal Gray in 1995, also joined the band. After these three members were added to the group, they changed their name to "The Roots." In 1993, the group traveled oversees to Germany, where they recorded and released their debut album Organix on Remedy Records. It was not long before the music industry picked up on the group's talent and offered them numerous record label contracts. That same year, The Roots signed with Geffen Records, also known as D.G.C., and in January 1995 released their first major label album, Do you want more?!!!??! The album was unique among others because it included no samples.

The Roots showcased their album at the Lollapalooza tour that summer, and then at the Montreux Jazz Festival in Switzerland. Guests on the album included beatboxer Rahzel the Godfather of Zoyze, best known for performing with Grandmaster Flash and LL Cool J, jazz artist Joshua Roseman, saxophonist Steve Coleman, and vocalist Cassandra Wilson. On September 24, 1996, The Roots released their third album Illadelph Halflife, which included the album's hit single What They Do. The music video for What They Do became extremely popular among the group's growing fan base. In 1998, the album was selected as one of The Source Magazine's 100 Best Rap Albums. D.J. Kyle "Scratch" Jones also became a member of The Roots at this time.

On February 23, 1999, The Roots released their breakthrough album Things Fall Apart, which eventually climbed to platinum status, selling 900,000 copies. The song "You Got Me," co-written by Jill Scott, was a huge success and won the group a Grammy Award for Best Rap Performance by a Duo or Group in 2000. The album was viewed in high regards as Rolling Stone called it a "top-flight record," and the All Music Guide considered it "one of the cornerstone albums of alternative rap." 1999 was a busy year for the group because in addition to Things Fall Apart they also released the double concert album The Roots Come Alive, a collection of live concert performances in New York and Europe.

In November 2002, the Roots released their sixth album, Phrenology. Malik B. left the group at this time and Tariq Trotter's personal lyrics in the song Water, describes the former band member's fall from grace due to drugs. Although the album did not sell as well as Things Fall Apart, Rolling Stone still went on to say that The Roots album Phrenology, created a "blueprint for twenty-first-century pop music." Lead rapper Tariq Trotter explained the slight decrease in record sales saying, "We haven't sold more records because we haven't made very much radio-friendly music. Our one commercial tune won the Grammy, but that isn't necessarily the music we want to put out." "I never wanted us to be the type of group that did the same thing twice," said drummer Ahmir Thompson. Therefore he added the influence of punk and '80s R&B to the album Phrenology. Guitarist Ben Kenney, who later joined the alternative rock band Incubus in 2003, was also influenced by the punk and '80s R&B, which gave the album a new sound. Phrenology eventually went gold, and was nominated for Best Rap Album at the Grammy Awards in 2003.

Game Theory, released August 29, 2006, is The Roots' newest album and their first album under Def Jam Records. The Roots are now working on their tenth album.

Photo Credit: Michael Seeley. "The Roots and Questlove made a stop in Orlando at the House of Blues Orlando as part of their 2016/2017 Holiday Tour." 42733. Photograph. Licensed under CC BY-NC-SA 2.0. Cropped to 4x3. Source: Wikimedia. Orlando, FL.