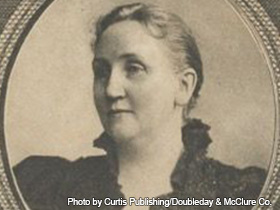 Sarah Tyson Rorer was born on October 18, 1849, in Bucks County, Pennsylvania. Over the course of her life, she worked as a cookbook author, editor, magazine columnist, and orator. Her work focused on the influence food has on the body, especially on the sick or malnourished. She is considered to be America's first dietician. She opened the Philadelphia Cooking School and influenced the field of hospital dietetics through her work there. Rorer authored numerous cookbooks and cooking pamphlets, but she is best known for her collection Mrs. Rorer's New Cook Book: A Manual of Housekeeping (1902). Rorer died in December 1937.

Sarah Tyson Rorer, also known as Sallie, was born on October 18, 1849, in Richboro, Pennsylvania, to Charles Tyson Heston and Elizabeth Sagers. Shortly after her birth, the family moved to Buffalo, New York, where her father worked as a chemist. After exploring her father's profession, Rorer became enthralled with the field of chemistry, which later influenced her choice to become a dietitian. Rorer attended school at New York State's East Aurora Academy. In 1870, the family moved back to the Philadelphia area, where she later met her husband, William Albert Rorer. They had two sons, William Albert Rorer and James Birch Rorer, and a daughter who died very early in life.

Throughout her career, Rorer was a teacher of domestic science, a lecturer on the impact of food on health, an author, and an editor. She was a columnist for and a partial owner of a Philadelphia magazine called Table Talk. Rorer was also an editor for the Ladies Home Journal for 14 years. Rorer wrote cooking and health tips, and she also discussed about issues pertaining to being a housewife.

She enrolled in a cooking class at the New Century Club in 1882 and shortly thereafter was solicited by the Club to teach the class and lecture at the Woman's Medical College on pertinent health issues. Her career picked up quickly. By 1884, Rorer had opened the Philadelphia Cooking School on Chestnut Street, which she ran for 18 years and educated more than 5,000 students. Her teaching provided cooks, the indigent, and medical institutions with nutrition information. She continued to attend lectures to educate herself in chemistry, anatomy, and physiology. Rorer is considered to be America's first dietician based on her work in preparing healthy meals for the sick. Her understanding of chemical compounds allowed her to prepare meals that would best react with the individual consuming them. Due to Rorer's influence, a new field of study and employment opened up: hospital dietetics.

Rorer became a household name, which was uncommon for a woman during the period in which she lived. She was honored at the 1925 Chicago World Fair. Rorer also began giving weekly radio shows on cooking techniques.

Rorer's cookbooks included recipes for a broad range of meals. She focused more on healthy recipes than desserts, although she did publish healthy dessert recipes. She provided a healthy way of making ice cream, called "Philadelphia ice cream," in which she says not to use eggs, gelatine, or a thickening agent, but only the freshest of ingredients. She also wrote pamphlets with directions for cooking simple dishes, like vegetables. Her most famous cookbook, Mrs. Rorer's New Cook Book: A Manual of Housekeeping, was published in 1902. The 731-page book has an extensive section on vegetables, which were her forte. She believed that vegetables were the most essential element to a proper diet and a healthy body. In this book, she stressed the importance of not overcooking vegetables because they lose their nutritional value. The book also includes sections on fish, meat, and poultry. Among her other major books, Mrs. Rorer's Every Day Menu Book (1905)provided a suggested menu for breakfast, lunch, and dinner for every day of the year. The book also includes menus appropriate for specific occasions.

Rorer became involved with politics later in life. She was president of the Lebanon County League of Democratic Women and toured Pennsylvania in support of presidential candidate Al Smith in 1928.

Rorer lost all of her financial holdings during the Great Depression. She lived out the end of her life impoverished and alone, relying heavily upon the financial support of her son and her former students. She died in her home in Colebrook, Pennsylvania, in 1937.